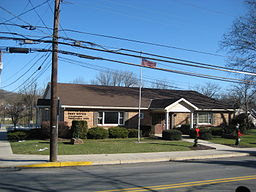 Stockertown Borough Council member Rosemarie Wenzelberger pleaded guilty yesterday to maintaining an illegal dump at her Center Street property. he plea came during a hearing before Magisterial District Judge John Capobianco. Officers Eric Schwab and Adam Shimer had five witnesses on hand to testify to what are apparently a large collection of old cars, sitting in the rear of the property. The tell me all the junk has attracted vermin, including skunks..

It also attracted me, a bottom-feeding blogger. I went out there yesterday to photograph the property, but saw nothing. Neighbors tell me it's in the back. They thanked Officers Schwab and Shimer for addressing the situation, claiming they had been complaining for years without result.

Wenzelberger brought her husband Eric and Attorney Bob Patterson in response to 14 separate citations. She is pleading guilty to one, and has promised to clean up her property and make it available for inspection by police in the next 30 days. If they think she needs to do more, she will get an additional 30 days to address their concerns. But after that, the hammer falls.

Her attorney, Bob Patterson, explained. "If this doesn't work out, they're going to back here with noo defense, paying a lot of money."

Court records reveal that she had been cited before in 2012.

At an earlier hearing, Officer Schwab asked that Wenzelberger's witnesses be sequestered. That means they have to step outside the courtroom until they are called to testify. It deprives them of an opportunity of shading their testimony .

Wenzelberger's sole witness was her husband, and he dutifully stepped out. But as the case progressed, Schwab and Shimer noticed that an audio device had been slipped under the door and was recording the hearing.

Eric admitted he did that because he wanted to hear what was being said. Because he failed to get permission from the people he was recording, he violated wiretap laws. But he apparently did so innocently. As he explained to me, he simply was unaware he was violating the law and was very sorry. He attempted to say he was sorry yesterday in court, but Attorney Patterson instructed him to remain silent.

Police have filed no charges against Wenzelberger over the illegal audio.

Wenzelberger and his wife are both active in the Stockertown Youth Association, established many years ago by former mayor , Mayor Sherman Metzger, Wenzelberger is VP and his wife is Treasurer. Their next door neighbor is president. This organization has a healthy bank account, by all accounts, but has turned down a Borough Council request the help fund upgrades for the Pavilion in Newhart Park.

Wenzelberger tells me the money uis there and the checking account statement is produced at every Youth Association meeting. "But iut's  outside our mission to provide curtains for a pavilion," he said.

He went on the lament that he wishes there was more coverage of Stockertown in the press. He pointed out no new properties can be built in Stockertown because the sewer system is at capacity. He also adds there are heavy fines outstanding for dumping sewage into the Bushkill Creeek.
Posted by Bernie O'Hare at 6/14/2016 11:28:00 PM

Email ThisBlogThis!Share to TwitterShare to FacebookShare to Pinterest
Labels: Stockertown

Is it true that this guy ran for council, paid for flyers, but cant clean his yard.

Stockertown Youth Association, why or what are they doing for the kids? I wanna see proof they aren't using the money for a personal benefit.

Yes, he runs in every election. His blatant disregard for the law coupled with the shady management of funds from the Stockertown Youth Association, (where he is VP, his wife tresurer, and her mother the President), certainly should preclude him from any public office. Every request Borough Council has made of the SYA for financial help to improve ballfields, park equipment or the town pavillion have all been denied because those projects "don't fit in the mission of the SYA or its bi-laws". The former Mayor earmarked much of the money to improve the pavillion, but passed away before he got it done. Now those donated funds remain the property of the "family owned and operated" SYA. Additionally, Rosemarie Wentzelberger shows little regard for the office to which she was elected by her reprehensible laxity of the oath she took serve with honesty and dignity. The violations to anyone else would be simple housekeeping. Keeping your property clean and free of excessive junk. To the Wenzelbergers, it appears they are above the petty Boro Code. How many man hours have been wasted writing and filing citations, mailings, postage, gasoline and court time SINCE 2012, all in an effort to get their property cleaned up. To get simple compliance of the Borough Code. These wasted resources would have been much better spent on patrol hours protecting all of us. Selfish and petty behavior, don't you think?

Wenzelberger has a rap sheet twice as long as his arm - check it out on PA docket Sheets. He's also a back stabber - I know first hand. But he attends all town meetings, and has his nose up everyone's butt in town. Get your own house in order before you go tearing someone else's down.

This has been coming for YEARS.

"Is it true that this guy ran for council, paid for flyers, but cant clean his yard"

That is true. TWO flyers, the second one after his rap sheet was exposed. He sent out a flyer which essentially said "yeah, I have lots of citations, but who doesn't?" I don't, Eric. Zero. He's a beauty, that one.

I have no reason to believe anything is amiss. Wenzelberger tells me that it is a 501c3, and if that is so, you can contact him and make an appointment to look at the financials.

Super, now we can put up with all his cap and the wildlife refuge for 60 more days. Let me count...yup, that's all summer....

There are no financials you'll ever see

Wenzelberger's think they are above the law. well let me tell you they are not. Eric knew what he was doing by putting that tape recorder under the door, Eric is such a liar along with his wife(Rosemarie). She sits at every council meeting smug and he sits there just as smug with his little tape recorder. Oh, how about the fruit baskets he ordered last year for the elderly, had the nerve to say they were all rotten and wanted his money back and time and gas for delivering them! Where is the money they have from the SYA they never show an accounting for the money, or even show any kind of support for the children in Stockertown. But then again, I wouldn't let my young child around him!!! He walks around the town taking pictures of peoples homes, now that's creepy!
My advice to all the fine people in Stockertown get rid of ROSEMARIE on council
DON'T VOTE FOR
ERIC WENZELBERGER!!!!!!!!!!!!!!!!!!! SHADY CHARACTER!!!!!!!!!!!!!

I am going to ask that you identify yourself if you want to cast personal aspersions. In my interview with him, he told me they do three functions a year for the kids. Easter egg hunt, Halloween party and a Christmas party with gifts.

Who would we go to have this association investigated, the police, DA or AG Office?

If you are suspicious, any citixmzen can make an appoint to review the financials. If tgat fails, you can ask the AG, Stockertown PD or DA to investigate. The fact that SYA refuses to fund projects the borough wants funded is no evidence of criminality. Let's be fair here.

So he has to show the books if asked?

Yes. He doesn't have to produce them at the drop of a hat, but must schedule an appointment to permit you to view the financial information. If he fails, then you would have a basis to seek an investigation.

Yes complete with donations from towns people and businesses, and please bring a covered dish. If the donation is in the form of a gift item and the Wenzelbergers like it....it never makes it to the event to be lawfully won by someone. Mr. O'Hare you know nothing about which you bloviate.