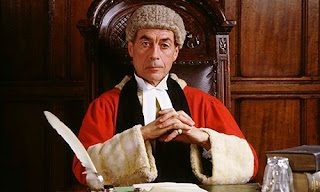 On Tuesday, I told you that Governor Tom Wold, in a deal reached with the Senate, had nominated 30 (it's actually 29) people to judicial vacancies. This includes the selection of Sallie Updyke Mundy for the Supreme Court pick as well as three Superior Court and two Commonwealth Court judges. Locally, Dan McCarthy is finally headed for Lehigh County's bench, even though he's lost in two attempts at election. Alicia Zito, daughter of Northampton County Senior Judge Leonard Zito, has been tapped for a vacant seat in Upper Mount Bethel Township.According to The Legal Intelligencer, Wolf ignored the recommendations of a nonpartisan commission that he named himself in making these picks. In fact, Supreme Court pick Sallie Mundy, whose blood is so blue that she raises Highland cattle at her estate, was never even interviewed.

In reaction to the Intelligencer story, I did some research into the nonpartisan commission named by Wolf, and what they did.

It was an 11-person commission, "100% nonpartisan," consisting mostly of lawyers. They were picked to vet possible candidates for the appellate courts, not county judges or magisterial seats. This commission interviewed 46 people, and recommended about eleven of them.

Leon W. Tucker, an African American judge from Philly, was considered a top choice. If confirmed, he would have been the sole black judge on the state high court, and only the fourth Supreme Court justice of color in that body's nearly three century history. He was passed over, not just for the Supreme Court, but for any of the other appellate courts.

Joe Cosgrove, who served as Chief Counsel to the Administrative Office of Pennsylvania Courts and as interim judge in the wake of the Luzerne County kids-for-cash scandal, also rated highly. He was at least tapped for the Commonwealth Court.

Personable Emil Giordano, son of Italian immigrants and a Northampton County judge, was another finalist for an appellate position. He was passed over completely.

Typical. More of the same. Thanks for the great reporting.

Another insider is Julia Munley who was named to the Lackawanna County Court of Common Pleas. Her firm, Munley Law, used to be Munley, Munley, and Cartwright before Matt Cartwright was elected to Congress.

Isn't some blame and what we used to call responsibility fall On the State Senate? How did our locals vote?

Politics vs Good Sense ,Well, Judge Giordano being a man of more than just fair judgement is now a Judge that has fell victim to crap that goes on in state politics. In the end ,bad appointments cost the tax payers ,and perhaps some faulty sentences of defendants .

Bernie,
"Is Judicial Picks an Insider Game"
Similar and like insider stock trading or gifting as a political campaign contribution¿¡
Than there is the overuling overuled conflict of intrests in profiteers pandering peddling of influence, all equating in the massive madoff grant grab get to give back payment plan procedure palumpasized¿¡

Sitting in my chair in suspended animation in anticpation for your opinions to post, hopping the toilet brigade lets loose some of that blue koolaid they are all imbibing in as to let the gas out of dr advertismentalists failing designs¿¡
RE:publican redd no party affilliation