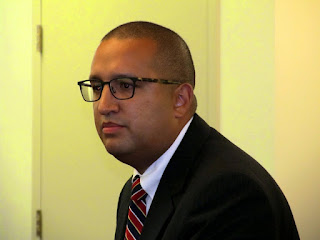 Earlier this month, I told you that Northampton County Director of Administration Luis Campos had suddenly resigned. Executive John Brown never explained why, but it's pretty clear he wanted his top administrator to go. This might actually be a blessing in disguise for the soft-spoken former administrator. Various Allentown sources tell me that Campos is under serious consideration as a replacement for the Managing Director position recently vacated by Francis Dougherty.

Any person nominated by Allentown Mayor Edwin "Fed Ed" Pawlowski, who is under federal investigation for political corruption, is going to receive tough scrutiny. But Campos has several things going for him. Council member Julio Guridy thinks the world of him, and even spoke on his behalf at Campos' confirmation hearing in Northampton County. He might be able to sway several council members. Also, he is both highly educated and experienced in both the public and private sectors. Finally, he is a Latino in a community that is largely Latino.
Posted by Bernie O'Hare at 6/24/2016 12:00:00 AM

Campos' one big negative is he worked in the Brownstain administration - Clueless, Clueless and Clueless, Inc.

Thirdly, he is totally over his head in such a position, as he was in Northampton County.

Welcome to the USS Allentown. Join the Polish Prince's sinking ship! Your tenure might be as short as his. Taking this position is the closest to political suicide you will have. This position was created by Pawlowski so that he can concentrate on his nefarious deeds of seeking higher office and leaving Allentown. Every mayor before him ran the actual infrastructure of City; but his lackeys on council bowed to his benevolence and arrogance.

Julio Guridy is fond of him.
The same Julio Guirdy who gave us the catastrophic police pension buy out?
Is this supposed to be a joke?

Why does Allentown need an un-elected "Managing Director"?

Don't we have a mayor that is elected that is supposed to manage the city ?

Clearly, identify politics is important in our governing.

It's important to have Hispanics in government in a city that is largely Hispanic.

Now, doesn't that sound just a bit racist? Does this mean that qualified Dutchmen need not apply and are not wanted ?

@7:56 Who ever heard of a Dutchmen qualified for anything. That's hilarious!

Allentown is desperate to fill that position. Who in their right mind would want it? Fed Ed is out in a year if not sooner. Meanwhile his city manager has to be exposed to the scrutiny and controversy of working with a likely felon. Campos is jumping from the frying pan into the fire if he takes the position.

I hope that Campos realizes that this job is BYOB - Bring Your Own Burner (phone).

Does this mean that qualified WHITES need not apply and are not wanted?

"Clearly, identify politics is important in our governing.

It's important to have Hispanics in government in a city that is largely Hispanic.

Now, doesn't that sound just a bit racist? Does this mean that qualified Dutchmen need not apply and are not wanted ?"

Oh, cutout the bullshit. What I said is that Campos is a Latino in a community that is largely Latino. That would be an asset, especially since he is bilingual, just as for many years it was an asset to have German-speaking officials in communities that were largely Pa. Dutch, including Allentown. I never suggested that Campos be hired simply because he is Latino. Your decision to twist my sentence tells me you have your own issues.

"Why does Allentown need an un-elected "Managing Director"?"

This position is not expressly mentioned in the Home Rule Charter. But that Charter calls for the establishment of an Administrative Code. I have to look at that to determine whether this is a valid position. I am aware of the argument against the position, but never researched the matter.

So basically, it's more important to hire based on ethnicity rather than qualifications ?

It is interesting to see how cynical the public has become, I know nothing of this person, but I see that everyone is under suspicion, everyone expects posts to be filled based on political correctness, everyone expects the worst. I understand fully, This is not an easy thing to turn around.

Julio is the reason we are in this mess as president of council his leadership has been a failure
Not to mention the voting record on appointees , who failed the test of time . Reconmented by Julio
How can a person with banking background not know how to balance a budget . Trusting Julio only leads
To more of the same policy that failed the city . Past proformance is a good indicator of the future ?

If that imbecile racist Julio likes him, LC should run - not walk- run away.

10:31, that is not what I said at all. I do not believe in hiring an unqualified person simply bc he of his ethnicity. Ideally, that should be irrelevant. But we live in a world and community that is still biased. A qualified Latino official in a Latino community that has been poorly served would be a good thing, just as it was for the Irish, Italians and other ethnicities.

It is Allentown, not LC. Regardless of your opinion, Guridy is one of the seven votes.

12:56 With all respect, Allentown has been poorly served by the Democratic bureaucrats that govern the city. Not by the ethnicity of the bureaucrats. What is needed is a refresh of the governing political party, which has demonstrated their ineptness and corruption since Mayor Heydt left office in 2001.

Also, Julio Guidry has largely served as an appointed individual to positions based on his ethnicity; as it's important to have a Hispanic member on many boards and other governmental authorities. If his name was Jay Gould, it's likely he could not have made a career based upon his name.

Also, working in a bank does not necessarily give one a financial background. His education is a B.A. in Sociology from East Stroudsburg University. Not in banking or finance, or anything close to an MBA.

Did you read what I wrote? I was not writing about appointing Julio Guridy as Managing Director, but Luis Campos. He is clearly qualified. He had the education and the experience and he is Latino in a community that is largely Latino. It appears to me that you either want to lump him in with Julio Guridy or hold his ethnicity against him. As for Guridy, he is an elected member of City Council and has a vote and will certainly support Luis. That was my point.

BTW, Very few non-Hispanics speak any language other than English in this country.

I actually thought all governing in this country was supposed to be done in English ?

I'm a little more concerned about the language being the Almighty Dollar than these artificial English-only sentiments that just alienate people.

We can never ever forget the infamous water war vote of yes via holio's burner phone that was cat under a heavily sadated LIEposuction appointee?!($
Waiting in anticipation for opinions this week as it should have been a hapining one?!($

It is America speak ENGLISH like every other culture who came here had to do. The job should be filled by the person who is most qualified, regardless of his/her ethnicity.

Uh huh. Sez a racist who has pretty much run out of arguments.

I just came out of church, started reading the this post, and came across all these negative comments about Mr. Luis Campos and me. It is so disconcerting to read how a few anonymous (who lack the courage at least post their names) try to express themselves about us without even knowing us or even speaking with us to know who we really are or our reasoning for what we do. The truth is that these1/2 dozens "anonymous" don't know the entire history on how the police pension votes happened. It looks like they don't know much about how to run city agoverment nor do they understand the reality of why the majority of council voted for the water and sewer lease concession contract, and they think that it all happened based on just my vote!

They don't know about my masters degree, all other courses and training I have taken or that I have developed several very successful businesses, or that the city has changed from hardly any economic development in past 50 years. That a large number of upper and middle class living in Allentown moved out of the city, including former mayor Heydt, that now there is over a billion dollars of new investments in the city from smart friends who believe in people like me...icons like JB Reilly, the Jaindl family, the Butz family and many, many others who are doing wonderful work and who truly matter in our community. They create jobs, they have visions more opportunity for all, they don't criticize others, they embrace diversity, they support those who are not racists and deal with people because of the content of their character not the color of their skin, or the many other languages they speak in addition to or besides English. Those people are visionaries.

Lastly, instead of criticizing Mr. O'hare, Mr. Campos or me I ask you join us in helping make our city, our county, our state, our country and our world a better place to live for all of us, including you and your family. God bless you!

Julio, I have been highly critical of you over the years, and i daresay you've been critical of my style. I hardly consider the developers you mention as "icons." I view them as developers who are interested in their own bottom line first, as they should be. I also believe you have been far too willing to go along with whatever Pawlowski proposes.

But in fairness, and this is a point you tried to make at one meeting, City Council is full of part-timers. You (Council) are at a disadvantage when it comes to a lot of things because you simply lack the time to review matters that is available to full-timers.

Also, no one can dispute that your advocacy for the Latino community is very admirable. When Luis was nominated in NC, you were at County Council to speak for him. Your words were well received bc Luis was confirmed, and nearly unanimously, by a Council that was no rubber stamp and included skeptical members like Lamont McClure and Ken Kraft. You spoke from your heart bc you know Luis and it was not just his ethnicity that brought you.

When people get personal and don't identify themselves, I don't attach much weight to what they say. But I understand your frustration with anonymous cowards.

Bernie,
I have always loved those that publicly proclaim religion, and were I come from there is a saying that goes something like this¿¡($ RELIGION is for people trying to stay out of HELL, SPIRITUALITY is thos that have been there¿¡($
Claiming some sort of religion and practicing another type in the dark corners of the backroom deals made in secret just is not a humanists way of doing work for the betterment of the whole that is professed as such¿¡($
I personally liked Bernie's American dollar comment!!!
RE:publican redd no party affiliation nor boughtIN to be in

Some jobs are just not worth it. I think Luis should steer clear of this dangerous situation.