Can Holden Hold On? 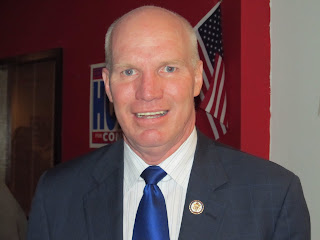 Congressman Tim Holden will tour the Victaulic Facility in Forks Township tomorrow, April 11 at 10:30AM. John Malloy, Victaulic CEO will lead the tour and introduce Congressman Holden to Victaulic executives and management. Jerry Green, President of United Steel Workers Local 2599 will also be on hand. Holden will also meet with workers and will be available to the press.

Holden's campaign also claims to have just picked up an endorsement from Pennsylvania Young Democrats.

Holden's opponent for the Democratic nomination, Matt Cartwright, however, has been swinging hard. Critical of Holden's unwillingness to agree to even one debate, Cartwright is touting an April 2-5 poll among 600 likely Democrat voters, giving him a 42-36 lead against the ten-term incumbent.

Well, I don't know about that, but do know that the Washington Post does list this race as one of the top ten in which an incumbent could lose in the primary.
Posted by Bernie O'Hare at 4/10/2012 10:34:00 PM

I got a phone call tonight about this race. But I was told they already had enough males in my age group. Told em Holden.

Funny how we are so close to the election, and I have yet to get a single mailer or call from Holden.

But I'm not that important, just a Committeeman for my precinct, the county committee Seargeant-at-arms, and a super voter in federal, state, and local primaries.

And my mother lives here too, no attempt to contact her. She has voted in all but 2 primaries since 1991, only missed one general election since 1990, and is an elected township auditor.

Maybe ignoring likely voters like us in Monroe County is what is hurting Holden. I mean, we don't matter, we just happen to out number his home county base.

As for Cartwright, we have received 7 mailers, and got three separate calls from his campaign.

Gee I wonder why those poll numbers. But I guess Holden is a shoe in here in Monroe County, King Sal Panto of Easton, and Northampton County Super-cop Morganelli endorsed him. So we will just knee jerk for them. aside from the fact 90% of my counties residents don't know who those two men even are.

The only time Holden spoke to Democrats in Monroe County (at the January MCDC meeting), he said how Monroe County is rural like his, and "you don't have urban problems like Philadelphia". Four days later there was a major drug/gang related shooting in Mt. Pocono. Around 50 rounds fired outside a problem bar, one guy had 10 rounds in him alone.

YEP, we don't have "urban problems". Perhaps Holden's touch with some parts of his new gerrymandered district is, well, "out".

I think the poll numbers are high, but I think Holden is the new Arlen Spector. Maybe he can run for Sheriff in his home county again.

Tim Holden is also endorsed by the Republican Party of Pennsylvania. Its why they gerrymandered him to stay in existence with all Democratic strongholds.

It will be tough for a real Democrat to win th eprimary.

Holden's website: "If you have any questions or concerns, please feel free to contact me through the web site."

J.Spike: "Maybe ignoring likely voters like us in Monroe County is what is hurting Holden"

Newsflash, its not just Monroe County that Holden ignores, but those of us in Northampton County also (unless you are part of the NorCo "establishment" meeting at The Blue with Holden). My own personal outreach to Holden have been unanswered for weeks (besides being assigned a "case number"). Cartwright and his camp made the effort to respond to my inquiries.

I may not have always agreed with Rep. Dent, but he and his staff always responded to constituents. I respect that. Representative Holden apparently does not. I don't agree with some of Cartwright's social issue stances, but I am not voting on those issues. Quite honestly, the GOP for years has manipulated cultural issues (e.g, the Santorum crowd) for political advantage only to govern in ways that frequently are contrary to the average Americans' best interests. Time to wake up. Rep. Holden--while better than the Tea Party candidate the GOP has in November--has voted against some key issues that I think "average Joe primary voter" would not be in favor of. He is vulnerable.

I think all these local "establishment" committees rallying the wagons and endorsing Holden simply because he has "seniority" might find they don't really have a good pulse of the people.

Holden is just the crown prince of the Democratic establishment. He looks like a penis with teeth.

The guy looks shifty and too comfortable.

The entirety of Schuylkill County will carry Tim Holden. He doesn't particularly need anywhere else to do that. It's a big county.

Tell your boss I as a member of the MCDC, am insulted he thinks we should support him while ignoring my people here.

Tell Mr. Holden thanks for the years, now enjoy your life in another career field. When you ignore voters, you have no right to expect to be elected.

He just keeps ignoring Monroe County Democrats, and if he doesn't give a rats behind about us now, what are the chances he will care back in the beltway?

Thanks for ignoring the biggest swing area Representative Holden, we didn't miss that fact.

It is sad he refuses to pay any mind to the new areas aside from buying TV time with ads.

He is about to see the Democratic establishment's pat on the behind is no deal sealer, as Arlen Spector learned in 2010. (He had the President & Vice=President come to PA to stump for him over Admiral Sestak). And Senator Spector actually listened to the people who contacted him, or at least sent us back form letters, which is more than Representative Holden has done.

The entirety of Schuylkill County will carry Tim Holden. He doesn't particularly need anywhere else to do that. It's a big county.


You do realize Northampton County has twice the population of Schuylkill County, right?

Am leaning heavily toward Cartwright. The Holden smear job on the criminal convicted judges was a low blow. NOBODY knew what they were up to up in WB-S. Vote Dem...not DINO!

Spike Rogain
Thanks for being a democrat. A wrong democrat is better than no democrat at all. We appreciate your doing good things for the party but your assessment of Holden is plain and simple wrong. We need more Tim Holdens in congress. Congressmen who will represent the constituency that voted them in. Take a look a t his old district and tell me he didn't do that. He was given the title of moderate. Give me a moderate any time as to a wing nut from the democratic party or a wing nut from the Republican party. Long live the moderates.

We here in the east of NH county did not elect Holden. He doesn't represent us except on paper now by gov't decree. He'll have to earn our votes the old fashioned way. The guy looks like a used car salesman..

The male organ with teeth analogy is quite humorous..

The fact that fat cat Dem pols like Panto and Seyfried are pushing Hoden, is all I need to know to back Cartwright.

Anon 2:32 I guess moderates lack a pair to post under their real names?

We need Democrats with courage and a pair, not anon posting cowards.

Holden has IGNORED MONROE COUNTY!!! THAT IS A FACT!!!

Cartwright has not. I wonder why everyone being ignored by Holden is leaning toward Cartwright?

"Spike Rogain
Thanks for being a democrat. A wrong democrat is better than no democrat at all. We appreciate your doing good things for the party but your assessment of Holden is plain and simple wrong. We need more Tim Holdens in congress. Congressmen who will represent the constituency that voted them in. Take a look a t his old district and tell me he didn't do that. He was given the title of moderate. Give me a moderate any time as to a wing nut from the democratic party or a wing nut from the Republican party. Long live the moderates."

Who is we? The Holden Campaign? The Panto household? Get a pair and post under your name, otherwise I have no respect for some "Moderate nut". Great rhetoric, if we were GOP voters maybe. LONG LIVE DEMOCRATS WITH A PAIR TO POST UNDER THEIR NAME!

I also should note Mr. Moderate is pimping his endorsements from the Lackawana & Luzerne County Democratic Committees, both groups who endorsed Democrats (Judges and other officials) now doing jail time for corruption. Funny when you fact check how Hypocrisy is easily exposed. Leave it to "wrong wing nut Democrats" like myself. lmao