Teachers' Union: “So What?” to 85% Increase In ASD Spending 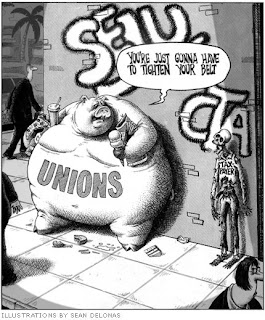 From Allentown School District Director Scott Armstrong: "The true nature and agenda of the ASD teachers’ union leadership was on display at the April 19th ASD finance meeting when Frank Nickischer of the teacher’s union responded with a 'so what?' to my expressed concern that spending in the district had increased by 85% in the past decade. The comment was part of an ongoing dialogue over a cost saving plan that would facilitate increased time for math studies by combining social studies and language arts. In an ideal world there would be unlimited funds to do it all. Unfortunately that is not the world we live in and those charged with the task of governing cannot make responsible decisions based on desire but must work within the confines of what is fiscally responsible. Clearly the teachers' union doesn’t get it and one can draw the logical conclusion that they expect the taxpayers to pony up endlessly to pay for their failing field of dreams which is in short modern public education.

I'm sure Scott will check in with an accurate answer to your question. It sounds right.

totally taken out of context and your union blame game is so shallow when compared to the big picture of our failing educational system.

What about the total failure of no child left behind? No union to blame here, more politicians that are totally uneducated and clueless!

I got the screenshot to prove it.

How may pupils then, and how many pupils now?

Per pupil spending is a more understandable value.

Uh oh, looks like Armstrong needs to take advantage of the extra 45 minutes of math instruction they'll get when they eliminate social studies.

This is why I can't tolerate the entitlement attitude of these union thugs. Why couldn't the union aybe he could have properly made an argument why expenses have nearly doubled in ten years.

"Why couldn't the union aybe he could have properly made an argument why expenses have nearly doubled in ten years."

What does that mean when translated into English?

I got the screenshot to prove it.

WOW! You should be on TMZ,what a 'gotcha' moment. Bernie, please try to control you anguish at being outted like this.

Really though? The teachers' union is the biggest problem with education today? Um, no. Some things I would list well ahead of them:: parents desire for excellence and high marks for their children even via mediocre curriculum, administrators so concerned with "where the money is" they pour on meaningless logs and tasks for teachers which takes away from quality lesson planning, colleges (not)preparing teachers as educators but as psychomatricians of rote, students who demand A's because they expect it for even the laziest and shittiest work, and INDIVIDUAL teachers who "phone it in" every day. However, a union is not the downfall here . ..

Public union thugs, especially the teacher union cry babies are nothing more prostituting leeches on our society. Cut their salaries and benefits/pensions and we will have enough money to educate the children or at least those who want to be educated.

And cut the frigging day care in the school districts.

I'm sorry, but if you want to make that kind of statement, you'll have to identify yourself.

Despite niceties that are often uttered as inoculations against teacher bashing, most teachers despise their students and really despise their parents. They are out to make a living like the rest of us. They invested in their educations and want ROI. They are not professionals in an association. They are union laborers with strict dictates about length of day, free periods, and days off. They should be treated as such. They are not in it "for the kids." They are in it for a maximum paycheck and a solid, untouchable pension. No shame in this. But they should be dealt with accordingly.

I disagree completely with this assessment of teachers. Most of them are in it bc they care. I've seen ample evidence of that over the years.

Most teachers do care. But, union leadership dictates how contracts are written and performance is measured. Unions live by seniorty rules and across the board rewards.
This is no longer working in the private world as new workers don't like the structure and don't join unions like they used to.

In education and other government areas, however unions thrived on the ability to extract premium wages/benefits.

Unions have so much political power they generally haven't been exposed to economic reality. Not until recently has the public source of ever growing funds (taxes) been reversed.

Why is ASD giving free lunches to all students as Scott mentioned before?

What Big Brother technology do you have access to that gives you credibility to assess what "most" teachers are like?

What I am going by is my own life experience, and most of them do care.

Current population (per district web site): 17,855 (ADM, which can only be calculated after the year is finished, will differ). The per student calculations are left as an exercise for the reader.

In fairness to the Allentown School District, I believe the 2002-03 budget was before they started their $250,000,000 building program, and the 2011-12 budget definitely includes bond repayments resulting from that program. Frankly, their schools were in such disrepair and so overcrowded in 2002-03, one could reasonably argue that the 2002-03 budget was artificially low due to deferred maintenance and capital projects, and that those chickens have now come home to roost.

I should add that I consider the "So what" comment, if reported accurately, to be quite rude and thoroughly unprofessional.