Brace Yourself For a New Wicked Witch of West Easton Story 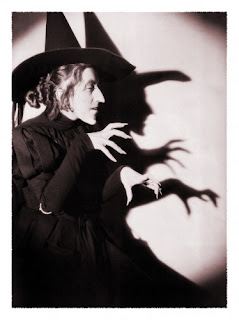 I usually stay out of West Easton. Sure, I really like Kelly Gross, Tim Jones and Tom Nodoline, who live there. But it's too dangerous for me. Within that tiny square mile lives a very disturbed person, Wicked Witch of West Easton Tricia Mezzacappa (WWWE). If she were to catch me in her hamlet, she might just turn me into an Otter.

For months, the Wicked Witch of West Easton has repeatedly accused me of stalking, burglary, sexual assault and pig kicking. She has also made even more disgusting accusations, which are then gleefully repeated.

These accusations have intensified. Last week, for example, I was surprised to learn that she had recently videotaped me, stalking outside her home, looking in her car windows and placing nails under her tires. She went on to claim that I had threatened to rape her the very next day, and poison her pig for good measure.

Of course, there's no truth to any of this, but it did convince me that I have no choice but to sue for defamation. I also filed a Right to Know request with Easton police, and learned she's reported none of these stalking claims. Finally, I decided to assert my own rights and attend a Borough Council meeting on Monday night, even though the Wicked Witch would be there.

A cop would be there, too.

When Mezzacappa saw me walk into the meeting Monday night, she just hopped on her broom and flew off, landing at another meeting in Wilson Borough.

But she still tried to make trouble. You see, on Monday night, after flying back home, she called police to make another bizarre accusation about ... moi. I have the report.

"She went on to claim that I had threatened to rape her the very next day, and poison her pig for good measure"

just make sure you don't get the order screwed up.

what's hilarious is that if you read her blog each time she posts the story gets more embellished.

this is one sick puppy

Didn't Patsy Cline sing a song titled about her?

The sad part is she probably honestly believes everything she is saying. And her method of operation is to sidle up to older men to beguile them, use them, and then turn on them when they stop letting her take advantage of them. Just look who her "friends" are or have been.

The final desperate measure of a bully is to act as if they are the victim.

With me, there's nothing to take advantage of, although I am definitely much older.

Bernie,
Many of us are looking forward to your lawsuit. Please insist on videotaping Mezzacappa's deposition. My guess is her body language will be as revealing as her spoken words. She probably can't remain civil for more than five minutes. And she won't be able to run away and call the cops either. Good luck!

HAHA, you deleeted the the comment making another point. Yet you continue to allow vicious attacks on this woman. Do you think the judge will allow you to be Mr. God in court? You are in for another reality check.

You really are a sad little man. Even with yur band of haters, in court you will be very alone.

Feel good beating up on a woman?

"Of course, there's no truth to any of this, but it did convince me that I have no choice but to sue for defamation."

I am sorry, but what would be the point? You "defamed" yourself many years ago!!

8:27AM The best liar is one who makes the smallest amount of lying go the longest way with embellishments.

"I am sorry, but what would be the point? You "defamed" yourself many years ago!!"

The point would be that I am not the same person I was 26 years ago, when I was drinking. And the accusations are so insulting and so defamatory that I need to take action. That's the point, asshole.

"Feel good beating up on a woman?"

This is ridiculous nonsense. Make an inflammatory acusation ... anonymously ... and back away. i would delete it but someone already told you what needs to be said.

u go for it BO. Perhaps thru your actions u might save this misguided whatever she is from herself and deeper insanity

This woman reminds be of another person I know. Victims, haters, liars, abusive you name it. Any one of these reasons would explain why she has no one. In her case she does have a pig....Added together, she is lethal and needs to be made to pay if only to lose in court. Everyone needs to stay away from this type of woman and the smart ones do. Whatever you need to do Bernie, you should do. She is truly an hateful bully. Maybe even confused sexually which could explain a thing or two. The only thing worse is when they have children and thus ruin them....

They, Gracedale and WWWE, are now moderating comments on their blogs. Amazing!!!

Are you having fun yet?

You and your friends enjoy savaging and defaming this poor woman but she will have her day in court.

I look forward to that. This woman, along with you goons, have engaged in a non-stop campaign of defamation over several months. As I said, she is only the beginning. It has been extremely vicious, and i have warned you before.

She needs a lesson Bernie. Hope she gets one. She is awful and anyone sticking up for her is either like her so they are clueless or they do not know her well enough to see how lethal she is. I can only hope that those who are like her meet someone like you in court one day. I would never spend 1 minute of my precious time in the company of anyone like Patrica. Apparently most everyone shares this judgement. She has no real friends. Just a pig.which in itself is both sad and wiierd. She will turn on anyone at any time and has. Her defenders will be her victims at some point. This is how it works.She is a tornado and you are the stick people. Run hard and fast away from her.

The attorney will throw out your nuisance defamation suit as fast as Tricia threw you out of her house after you kicked her pig.

The only defense anyone need against you is your blog. You are a vicious hate monger who has defamed many people. You have put yourself in the public arena and the judge will so note.

You know this but you want people to be frightened but your tactic has become old and stale. besides it is the same tactic Angle has used for years.

This case will be decided by a judge and jury, not an anonymous coward.