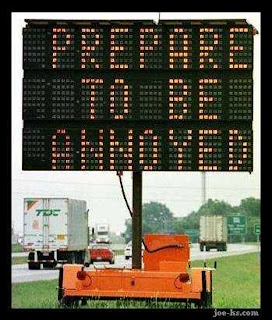 When Allentown's Planning Commission gave their green light to the latest version of a new downtown hockey arena, they did so even though no traffic study has been conducted. "Those details haven't been honed out yet," claimed a City engineer. But highly placed Allentown police officials are privately very concerned about how - or whether - the City's downtown will handle the load.

What about the Iron Pigs? There seems to be few serious traffic problems there. Police explain that Coca Cola Park is more accessible. In addition, they claim baseball traffic is much different.

People visiting Coca Cola Park tend to arrive at different times. Some are early, to soak in the atmosphere or get autographs. Others are just as happy dropping in as late as the first or second inning. People also start leaving in the sixth or seventh inning, which reduces the number of traffic jams.

But hockey is unlike baseball, police claim. Fans tend to arrive right before the game, all petty much at the same time. They tend to stay until the bitter end, too.

For obvious reasons, I am unable to identify these officers. A Mayor who is willing to sue someone for exercising his constitutional rights will certainly retaliate against police officers who worry about his "transformation."
Posted by Bernie O'Hare at 4/30/2012 12:01:00 AM

Another piece of evidence for Abe's lawsuit.

If he (Abe) were involved in the project, the traffic study would have had to been completed prior to any work being done!

Not playing by the rules...

This whole project has been a boondoggle from the onset. No thought apparently was given to anything but profit created for a few (two?) from the zone. I'd be interested in just seeing how they plan to park everyone and get them out in a timely fashion....much less get the vehicles in and out from 22.
No planning other than bank deposits.

Love how these "sources" appear to push whatever cause of the month you are involved in O'Hare. The only police talking to you are giving you a breath test or checking why you are in a neighborhood.

Having attended numerous hockey games, I can tell you that they are mistaken. Maybe your "sources" should be real cops from a place that has hockey.

You are too much O'Hare.

"No traffic study has been conducted" You are out of your mind... there was a study done last year.

Here is the link to the study.

How and before you write a post about the parking situation, here is that study too.

Welcome to O'Hare's world. Fear mongering and false quotes from "sources" that are never revealed. Most likely because they do not exist.

Don't forget the city's plan to reduce traffic to a single lane on both Linden and Turner to make room for bike lanes. Perhaps they think this will encourage fan to cycle in and out of the city for the games.Or maybe they just aren't thinking.

If the studies produced for the arena are anything like those done for the bike lanes then they won't be objective.

The NIZ legislation itself does state that any project that disrupts traffic would not be approved. This arena violates that component of the law.

FDAA, According to a City engineer who spoke at the planning comm'n, there is NO traffic study or report for the plans they approved in
March. This includes a luxury hotel, office building and parking garages. I have looked at your link and it applies to none of this.

. . . and then there's the question, how attractive are parking decks when 8,000 people want to exit them at the same time?

Whenever I attend an event there it will be nearby surface parking lots for me. Wish there were more.

Oh, yes. I really don't want to help fund this effort through anything other than admission fees. Risky investment.

Any traffic study on linden that says bike lanes are safe has to be either bought and paid for by bike people or done by a blind person.

Anyone who has dealt with traffic after a Philadelphia sporting event will laugh with joy at this "problem." Again, the apparent lack of any knowledge about sports or local professional sports is staggering here.

I used to love ice hockey.

Now, I really don't want very much to do with it at all.

Funny how that has worked out.

Thank you very much, all-Democrat Rubber Stamp Council of Apparatchiks.

Thank you very much, NIZ Cheerleaders.

JUST SAY NO TO RIDICULOUSLY-PRICED PALACE OF SPORT FOOD (THAT MOOCH-ELLE OBAMA WOULD NEVER APPROVE OF, ANYWAY)

They didn't need a traffic study. All they had to do was ride in my car last year after the bad flooding we had that caused several roads to be shut down. Normally takes me 20 minutes to go from Whitehall to Fountain Hill. On the day of the flooding, took 1 hour and 45 minutes. Can't image what travel will be like during an event.

IronPigPen (10:00 AM) - You never tire of your childish posts, do you? Apparently, BOH loves them as he allows them while deleting others with mere opposing views. At least they aren't written like a 14 year old who just read his first Ayn Rand book.

10:54 - So let me get this straight - if it just happens to flood during a Phantoms game, you could be in for a long evening. Thanks for the tip.

(It takes 1:45 to get out of the parking lot at Citizens Bank Park after a game.)

I am glad that so many teabaggers who wouldn't know a hockey puck if it hit them in the head won't be coming to the hockey games. Continue to prep for the end-times. Stack those cans of beans.

The rest of us will be enjoying a nice exciting night of hockey. You can blog with Bernie about how the world sucks.

at this point that hockey will never drop there.

sorry that hockey puck will never drop there

Checkmate
Palumpashitsky and crew have there spinkters holding tight to the goose that laid the golden puck.

Any developer who will not do a market study prior to a commitment for a project is either using somE one elses money or is s fool.

Major project without a traffic study, well that makes the developer above, even in the worse case look like a friggin genius.

As for all you beer swilling sports loving Richards, I guess Vuagra never worked. What is life like without s thrill. Imagine going to the hockey arena hoping a wayward puck finds its home in your crotch.

i am NOT a traffic engineer but here goes. anyone parking in the old Hess's lot MUST exit onto 8th st turn left onto linden and head west. anyone parked in the 6th and linden lot MUST exit onto 6th and head north. anyone parked on the linden st lot [600 blk linden ] must exit onto linden and then MUST turn south onto 7th and head south. now we just diverted traffic into 3 different directions. with a couple of blocked off streets until traffic empties and in a 1/2 hour we are back to sleepy downtown and can roll down the storefront gates again.

12:23 - Good analysis. The Chicken Littles must have never attended Musikfest, a concert at the Fair, or the fireworks.

Police officer are called lots of things. But I have never heard them called Chicken Littles until now.

"The Chicken Littles must have never attended Musikfest, a concert at the Fair, or the fireworks."
three days a year of gridlock jamming the street is acceptable,
the 200 days (supposedly) of traffic snarl this travesty would generate is not acceptable.
kill the arena!

As for the police, your article says basically nothing other than a policeman's opinion on traffic differences between baseball and hockey. Gee, that's certainly foreboding!

And Chicken Littles was referring to you for posting such a non-story to merely add more worry.

Has Atown police worried??? Maybe they should spend more time worrying about how NOT to cheat on their wives and families! Atown pigs is more accurate!