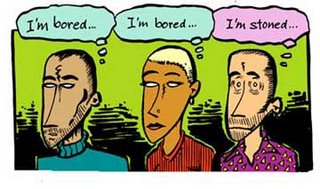 LVDem last month blogged about a new "local liberal talk show" airing on WGPA 1100 AM every Wednesday between 4 and 5 P.M, hosted by a "Wally G." It's called "Checks and Balances." I enjoy Air America, do a little talk radio from time to time myself, and decided to tune in yesterday. It was the longest hour I've spent in some time, longer than an hour in church.
First, the dude on the air wasn't taking any calls. So it's not talk radio. Second, all Wally G did was read a script in a monotone voice, interrupted by a few musical interludes. Man, I don't know how anyone could listen to that for an hour and stay awake. Third, if this program is aimed at swing voters, it's missing the mark. I'm a screaming liberal, and even I was turned off by the constant Dent-bashing. Wally G claims ninety percent of Republican ads are attack ads, but 100% of this program was a smear. He implied Dent is corrupt. He even went so far as to say that if Dent sleeps with the dogs he'll wake up with fleas, whatever that means. He did it in such a boring monotone that most people were probably dreaming when he said it.

Charles Dertinger, Dent's Democratic opponent this Fall, last night told the Northampton/Progressive Alliance he thinks Dent is a good person. His disagreement with Dent focuses on issues. If Dertinger can stick to the issues, why can't a scripted propaganda blast?

Liberal talk radio is always bashed as too boring to survive in commercial broadcasting? Anyone who listens to Randi Rhodes knows that's totally untrue. But Wally G has some work to do if he wants anyone other than diehard Dems to listen to his show. He might try a joke, inflecting his voice or dragging in Jolly Joe Timmer. But he's got to do something before he's his only listener.
Posted by Bernie O'Hare at 9/14/2006 05:33:00 PM

Last week it was Repub-bashing; the direct message was: vote Dem and one's problems will disappear.

The latter idea ruined what was mostly objective information.

And yes, there are no calls.

I saw that on the drudge report this morning. The site is still up and running.

Bernie you're so fair and baanced.

I'm a miserable bastard, true. And I'm definitely unbalanced. But I'm not tryiong to attract any votes. If Dems want to attract swing voters, they need to work on that show. Negative campaigning is always a turn off, don't you think? And people just don't like to hear a one hour sermon.

Bern I would love to go on air with Wally G and discuss the Democratic strategy for Nov 7th.
Why no comments about Charlie "Dirt" and those lovely new attack ads of his. If he is so confident of victory, why open up with a fire bomb?

Chris, You're absolutely right. I'm working on a post about it now. There's enough real issues out there. No one needs to roll around in the mud.

I also want to do an Act Blue post for you and Russ Shade, but don't know if I'll have time for two posts tomorrow. That one is also in the works. I meant to do it last night but I couldn't help writing about the anti-Reibman, Stoffa.

Thanks for your comments. Thanks to Gort, Mr. Moshki and Dr. Rick, too.

As mind-numbing as that sounds, it can't possibly be as bad as Ron Angle's show! Politics is my livelihood, and I take it very seriously. But, every time I tune into Angle's show, determined to pay attention and dissect his spin so I know how to counter-attack, I develop such a physical revulsion that I HAVE TO turn it off after 3 minutes!

Angle's monologue is so damn boring and inane that I can literally feeling my brain cells dying as I'm listening.

You couldn't PAY ME to listen to that crap he calls a radio show!

Well I made it through the entire hour. I think the show can be far more effective. Wally G has a great radio voice but his script was a little too attack-orineted. And when read in a monotone, it's going to turn people off. This is constructive criticism. If he wants to attract more listeners, he needs to tone it down on the rhetoric and try to make the show a little more entertaining. Remember this criticism is coming from someone whose sole knowledge as a radio host is as an occasional fill in for Angle, the show you can only take for three minutes. Last time I did the show I brought in a whole bunch of pictures to attract more listeners. I think it worked.

What I would like to share is a fantasy. I've been told by theatre people that I have what would be a good "radio" voice. Perhaps it stems from my days of defending Charlie Dent's freedom in the South China Sea, as Communications Officer for Commander, Landing Ship Squadron Nine. (Note: Charlie never saw a minute of military service, preferring role of chicken hawk, i.e., he prefers to send YOUR kids to fight our "enemies."). Back from digression: I would like to go on the air and just do some dramatic reading of some non-fiction stuff such as Thomas Merton's "Meditation on the Sanity of Eichmann", Martin Luther King, Jr.'s Proclamation on or against the War in Vietnam, selected passages from Edward Abbey, Kurt Vonnegut, Henry David Thoreau, etc. etc.. Anybody out there know of a radio station that would be willing to consider giving me an audition, let me know. I can be had cheap. In fact, I can be had for... well, let it go at that. Subcommandante Bernardo, located somewhere in the belly of the Beast. BB

BB, If I get tagged to do Angle's show again, I'll give you a holler. I'll give Russ Shade or Chris Casey first shot since they are trying to get elected to something, but you're next. As far as what material you should bring, I like your stuff. Just don't try to sell your car on the air. Timmer will make you pay for that. But you can give me hell for being mean to the Dent 9.

You do have a pretty good radio voice (better than mine) and would do well on talk radio except for one thing. Bernie, your brain is too frickin' big. If you have get a labotomy, Limbaugh's days are numbered. And it's done wonders for me.