Bloggin' at WGPA AM on Labor Day With Ron Angle 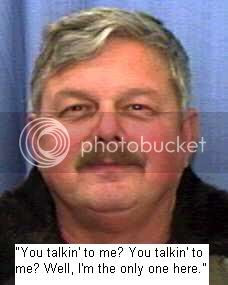 While you're sitting on your duffs sippin' pina coladas and eating twinkies, I'll be hard at work on Labor Day, bloggin' on WGPA 1100 AM with the Evil One, Ron Angle. In addition to being a shock jock, he's also a shock Northampton County Councilman. He and I usually aren't on the air at the same time. When that does happen, we generate enough hot air to heat the entire Lehigh Valley for a winter.

Ron Angle, you may recall, has been kicked off just about every radio station in the Lehigh Valley and Poconos. His politics make Attila the Hun look liberal. His long range plan for the middle east? A parking lot. His answer to illegal immigrants? Machine gun nests at the border. And don't get him started on those Ten Commandments or I'll take my six inch samurai knife and commit harakiri right on the air.
As if his views aren't bad enough, he's mad at me right now. I spoke against that Council payraise , and County Executive Stoffa actually vetoed the damn thing. I didn't expect that to happen! Nobody listens to me.

Now Angle's pissed at both of us. God, take a dime from a gazillionaire and he freaks out. I don't even know why he wants me on the air with him. Maybe he wants to kick me some more because Stoffa keeps ducking him.

All I can say is it's a good thing Angle can't read or I'd really be in trouble.

All kidding aside, and despite my many differences with him, I love the guy. He advocates open, accountable government and fiscal responsibility. He's not nearly so conservative as he would lead you to believe. And he has been a good friend to me over the years. I do think he displays insensitivity at times, and will challenge him if I hear him say anything along those lines.

I have no doubt you'll kick his fat-Angled arse. Go get him!

Incidentally, you have a hilarious blog. I'll have to give you a "shout ot" next time I report on our blogosphere. Thanks for your confidence, but Ron's tough to take down.

Nice mug shot, what was his crime, unlicensed KKK rally?

Now that's not nice. But it is funny. I think the KKK is meeting at Gettysburg sometime soon.

Hi Bernie- I found your blog when I was trying to find some info on the Meet the Press throwdown today.
Great site- but I didn't have nearly enough coffee to brave the face of Ron Angle. [shudder]
I am bookmarking you for sure!

Donna, I'll be listening to that Meet the Press confrontation on C-Span radio tonight. Thanks for the nice words. I checked your home page, www.sheerbrick.com. Nothing like a nice local and artistic business!

THIS is a serious question for the shoplifting sleaze-bag:

Ask him to name ONE THING he has ever done -- as in ACCOMPLISHED -- as a member of Council, besides bitch, and whine, and criticize what everyone else has done?

He voted to raise his own salary. He voted against the economic bond issue that is now bringing jobs to the Valley. He criticized Reibman for getting up in the morning, but the real question is:

WHAT HAS RON ANGLE EVER DONE (ACCOMPLISHED) AS AN ELECTED OFFICIAL (BESIDES INSULT EVERY ETHNIC GROUP AND CRITICIZE WHAT OTHERS TRY TO DO)?

The answer, of course, is NOTHING!

He's a joke, he's a fraud, and he will lose next time he runs because even the Republicans realize what a loser he is...

By the way, Ron, Bob Nyce hates your guts along with a lot of other solid GOP'ers who know you for what you are.

I will pose these questions to Ron if given the chance. But I'll leave out some of the personal stuff.

On the big issues Ron and Bernie are twins:

1. belief in a man-made god/invisible monster.

2. Care about THEIR pets only--not about all other animals.

3. Belief in two-party (one mess)
system.

5. Not nearly enough hatred for development/deveolopers.


Moshk despises immigration more than Ron Angle does in case anyone wants to call r/m a liberal.

One felony committed by an immigrant is one too many.

the time the U.S. NEEDED immigrants
is approx. when our grandparents were born.

Mr. Moshki, I have no frickin' idea what the hell you're talking about. Next time I pray to God, I'll ask Her to explain it to me.
Thanks, I think.

Even on iraq, you don't differ much from Ron; he knows it's a disaster. The disappointing thing is that the Country is not demanding an end to this insanity; we are immune to suffering and death.

That leaves Gay Rights and Abortion;
on these Angle is wrong.

The Anti-Aborts are always Bible people; they are pro-suffering, forced motherhood, pro-war. Unlike immigration, gay rights causes no suffering.

As far as non-human animals are concerned, they are the legit. "least of these." Would you eat meat if you had to murder your own?

It's really not all that complicated.

He looks a bit like John wayne Gacey in that shot.

Or am I alone?

Maybe someone should Photoshop some clown face paint on him, I mean even if you don't see the ressembulance to Gacey, you have to admit.

RON IS A CLOWN

Now Moshki, Listening to your wxplanation, I don't know how the hell you concluded that Ron and I are practically twins. We're both ugly and obnoxious, but he's rich and I'm poor. And on the issues
Iraq - I opposed it before it started;
Abortion - I'm pro choice;
Death Penalty - I'm opposed;
Gay Marriage - Go for it;
Dvlprs - I've been involved in a lawsuit and an electoral campaign that opposed developers,although I lost
Two-party system - I've been a Green, and am one of the few Dems who did not trash Nader when he decided to run again. Angle is a big third party supporter. He and I are on the same page there.
Illegal immigration - I don't even think this is an issue.

Angle and I are miles apart on a lot of things. But I like the guy.

He do resemble john wayne gacy a lot!

Moshki & Spike, Holy canoli! I just pulled up some pics of John Wayne Gacy and you're right!