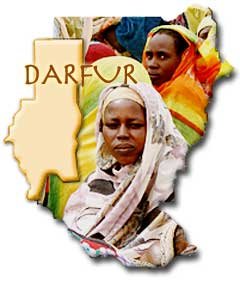 Amidst all the controversy over Nazareth's proposed government center, one fellow seemed out of place at last night's borough council meeting. He was a soft-spoken young man, and was the first to rise during last night's courtesy of the floor. He was not there to save the park or to rail against government spending. He instead quietly asked for permission to hold a candlelight vigil in Nazareth's circle tonight between 7:30 and 8:30 PM.

When asked why, his simple answer was that something needs to be done about the genocide in Darfur. Four hundred thousand fellow human beings have been needlessly murdered, and another four million Sudanese are starving. The U.N. has finally authorized peacekeepers, which might stop this senseless slaughter. The vigil will commemorate the victims of this mass murder. People unable to attend the vigil are asked to light a single candle in their windows tonight to remember those who have died.

Council unanimously approved the request. The courtesy and sensitivity they displayed made me forget, if only for a moment, that we really are all on the same side and want what is best. I too often look at things in a simplistic way - council members v. residents, pols v. taxpayers, liberals v. conservatives. I tend to forget that most of us are people of good will even when we have different approaches to a problem. For more on the situation in Darfur, click here.

I passed up tonight's county council meeting to participate in Nazareth's vigil for the genocide victims of Darfur. It was a small but moving experience. I was especially impressed by the youth and sincerity of these participants.

There will be no big headlines in either paper tomorrow about this tiny vigil. When I made this point to one of the organizers, he smiled and reminded me that Mother Teresa once said, "We cannot all do great things, but we can do small things with great love." This was a group that would consider itself successful if it only reached one person.

Great commentary Burnie. It is good to see our youth aware of things happening around the world. Although I am aware of this genocide, I fall in the group of people who need to be educated on what to do to stop it.

Bernie - good post. More needs to be done about this, and

Another resource is divestment. See http://www.sudandivestment.org/position.asp#state

PA already has a law providing for divestment, among other responses, in all state sponsors of terrorism, including Sudan: http://www.legis.state.pa.us/2003%5F0/hr0263p1580.htm

It doesn't require divestment, though, and none of our cities or towns here have any such measure. We could push cities, towns, and counties to adopt measures like the State's to move towards divestment from all of the 6 countries on the state department's terror list. Few politicians would dare oppose it, I'd think.

Not to be the wet blanket I usually am, but if I can't affect change in the township I has lived in for 33 years, then what can I do for this situation?

My friends in Lower Saucon adopted a resolution last night to remember the 5th anniversary of Sept. 11th. They are also holding a candlight vigil or rememberence ceremony Monday night at 7 PM at Town Hall if anyone is interested. I am sure a lot of other palces and churches are too.

For me the question is they say remember so we never forget. But what does remembering do really? We need action to prevent these acts, so we can forget what is is to live with terrorism, understanding that there will always be violence and evil in the world and we should not be so naviee to think we are immune.

LSTresidentPIA said...
This comment has been removed by a blog administrator.
September 7, 2006 at 2:11 PM

To Anonymous, Thanks for the links. I'll look into this divestment idea.

To LSTresidentPIA, That's the question I asked Chris this morning on WGPA AM. His answer is that he is a Christian and thinks we need to love one another. In his view, it's the little things that matter. I appreciate his enthusiasm.

My next question is, where are the "pro-lifers" on this one. Life is being taken away from people who are alive, but you don't see them jumping all over this, like they do about a abortion.

Well, in all fairness, this is not a widely publicized incident. But President Bush actually did call it genocide, something Clinton was reluctant to do in Rwanda. And the US got a resolution thru the UN.

Thanks for your comments, LSTresident

Thanks for having me on your program this morning, I appreciate your interest in raising awareness of a truly horrible crisis.

If anyone has any questions about the situation in Darfur, comments, or information I might not know about I'm always open to hear it.

Chris, Actually, I'm the one who has to thank you. It's very encouraging to see a young person take an interest. It's even more encouraging that you're motivated by your religious beliefs more than by politics.

Where is the candle light service for the memory of Sandra Yohe? Allentown is a little closer than the Sudan?

Mr. Moshki, If you feel strongly about it, then organize one. As for me, I'm happy to see a group of very young people who are actually taking an interest in the world around them. I won't criticize that, but will applaud it. And in the case of Darfur, the situation cn be stopped. Unfortanately, that can't happen for Ms. Yohe.

It was the timing; admittedly, it was a non-sequiter on the part of Moshki.

The once All-American City is now mostly a sewer but the Suanese situation is difficult.

If $$ is sent, will it help the unfortunate in the Sudan?

The country has been a mess for a lot longer than most people realize. There has been fighting
in all of it, not just Darfur.

Clinton talks big about Rwanda now but short of sending troops TOO LATE there was nothing anyone could have done. And Sick-Willie know that!

Your criticism about Clinton's reaction to Rwanda is more than justified. He ignored it. For all his flaws, Bush is to be given credit for properly calling the situation in Darfur a genocide and trying to mobilize the UN.

Bernie, your objectivity is duly noted.

Was not aware that The Fuller-BushMan had done that.

Of course, he is also known as:
'I-RACK-UP-THE CARNAGE'.