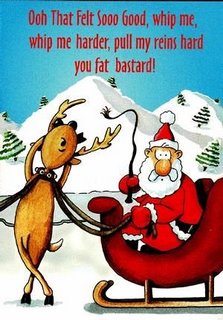 I suppose you've all heard by now that Silhouette Showbar, normally a respectable strip club in Coopersburg, has "blindsided" borough officials by converting to a swing club on Saturday nights.

The borough manager is doing everything he can to make sure those in need of lap dances don't go elsewhere.

I decided to check it out Saturday night, purely for investigative purposes, but the bastards at the door wouldn't let me in. They didn't like my partner, Sexy Sylvia, an inflatable doll I picked up recently at a yard sale in Upper Macungie. I'm sorry, but that's discrimination!

Sylvia and I jumped back in my jeep and I was just ready to leave when suddenly I heard sleighbells ringing and a loud, "Ho, ho, ho. Where are the hoes?"

Damned if wasn't Santa Claus! The jolly old elf parked his sled in the handicapped spot right in front of me, hung one of those stupid wheelchair placards over his reins, and hopped off, smelling of cheap gin and tobacco. His date? Rudolph! And Rudolph's nose isn't the only thing that glows in the dark.

Saint Nick had an assortment of leather boots, belts and whips in his sled, and I have no frickin' idea what was in his bag.

Have you ever seen Santa up close and personal? It's no wonder he scares the hell out of kids. First, he stinks, although he blames that on the reindeer. His long beard? He's just too lazy to shave. His sled is littered with old McDonalds bags and candy wrappers. And his bright red coat is full of cigarette burns and foodstains. He's a heart attack waiting to happen and should have keeled over several hundred years ago.

Several months ago, I told you Santa had drowned when he and an entire team of reindeer slipped through the North Pole's thinning ice. Another victim of global warming. But the elf's girth apparently enabled him to pop up like a bobber, and he was fished out of the drink by Inuit who mistook him for a walrus.

"Come on, Rudy, let's find out who's been naughty and who's been nice," said Santa as he pranced into the swingers' club, with Rudolph scampering behind him. Santa gave me a little wink as he strutted by, saying, "You're lucky this is my week for reindeer."

Sylvia shouls sue. After all she is registered to vote, and did work for a municipality. (Sort of)
I'm thinking of circulating petitions next spring to get her on thr ballot for supervisor. She could use the publicity.
Hey, did you see any of the stepfords wearing their pearls? I hear they are subservient!

DemFly, You'll have to ask Santa.

Uhm, Bernie that place is no good. Drugs, sucidies, and just a general nusiance to the borough...

Somebody is having way too much fun with that damn AFLAC duck!

Somebody is having way too much fun with that damn AFLAC duck!

So charging cover into a club where conjsenting adults do as they wish together BAD.

Paying admision to the same club to Pay for dancers attention and get $20 Happy Endings or $40 Hummers on top of that GOOD.

Hmmm, think Coopersburg needs to take a look at reality.

Hey fuckhead, why dont you take your blog and shove it up your dead moms cunt? Atleast i have a pic of you now, you little cocksucker.... payback is a bitch

FU, You're not exactly helping your cause with that type of banter.