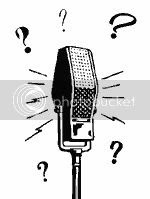 I can't help it. I'm addicted. I know I should be listening to NPR or doing yoga, but this is one liberal who loves AM talk radio. Radio Times with Marty Moss-Coane out of Philly is good stuff, but that's often foo foo. Real talk radio, with its glittering rainbow of opinions, ridiculous or not, is what I like. It can be egotistical ranting but is probably also the only forum remaining in which everyday people can express themselves.

Here's our local round up.
1. WGPA 1100 AM's "At Issue" with host Ron Angle, Monday thru Thursday, 8 to 10 AM. Angle's bombastic "in your face" style alienates most of his fellow Councilmen, but it's pretty good radio shtick. Frankly, I think he likes his radio job better than anything else he does. Although Ron can get testy when he forgets to take his pills, he's usually quite charming, entertaining and has some terrific guests. He often is talking about an issue for several days before it hits the papers. And I love his taste in guest hosts. The call in number is 610-866-8074. Highly recommended.

2. WGPA 1100 AM's "Hot Topics" with host Don Russo, Fridays, 9 to 10 AM. Russo's style and point of view are a marked contrast to Angle. He showcases the Democratic party. He's much less confrontational than Ron, but also a lot less entertaining. He's a good alternative to Angle, and has produced some good guests. The call in number is 610-866-8074. Recommended.

3. WEST 1400 AM's "Voice of the People," an Express Times weekly Wednesday radio show, 5:30 PM. Different staffers host the show, but it's at its best the first Wednesday of the month. That's when editors Joe Owens and Jim Deegan, the "A" team, man the mikes for wide open discussion. This show has a playback feature on the ET website, and if you listen, you'll hear all about editor Deegan streaking down Northampton Street! Owens and Deegan missed their calling. They do a terrific job on talk radio, and it's unfortunate we only get to hear them once every month. Unlike Angle or Russo, they don't promote the agenda of either major party. The call in number is 610-258-7124. Highly recommended.

4. WGPA 1100 AM's "Lehigh Valley Means Business," hosted by Attorney Bruce Davis, Fridays, 8 AM, a weekly interview with local business leaders. Although Bruce is a distinguished corporate lawyer, his relaxed and informal style makes for a pleasant and informative program. This is not a call in show. Recommended.

5. WGPA 1100 AM's "Checks and Balances," hosted by Wally G, Wednesdays, 4 to 5 PM. I'd rather sit in a dentist's chair than endure another minute of scripted propaganda. Perhaps Wally will change his format. This is not a call in show. Not recommended.

6. WAEB 790 AM's morning show, hosted by Bobby Gunther Walsh, Monday through Friday, 9:15 - 10 AM. I used to listen, but stopped when Gunther told listeners several years ago he didn't want to hear from anyone who disagreed with him about Iraq. The show has far too many commercials to allow for meaningful conversation. Not recommended.

You need some edumacation. you need to listen to O'hately and Rush Dimbulb. we got to get your mind in the right place, you bleedin heart lefty commie liberal!

It can be a source of great misinformation amd hate. But it's great for venting. I like local talk radio much more than the nat'l shows.

As I rarely listen to the radio, or watch TV for that matter, I'll take your word on our local AM scene and maybe try Russo or the Express folks. That said, I tried listening to walsh on several occasions and I certainly agree with your non-recommendation. I think he's trying to be the Valley's Rash Limburger or Bill O'liely (geez, hope I spelled their names properly) and I could never take him for more than a few minute or so. Actually, the commercials were the best thing going for him.
dg

I listen to alot of talk shows on Sirius or on-line.

and also
http://www.radiopower.org is a GREAT on-line station!!!!

Spike, Those are some great suggestions. I'll definitely check them out. But I like programs that deal w/ local issues as well.