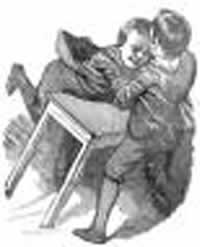 In my last post, I told you about some Dent-bashing going on at WGPA AM. Just last night, I listened to Dertinger speak twice, both at Stoffa's home and at a Northampton/Progressive Alliance meeting. He was extremely critical of Dent, but confined his complaints to issues like Iraq. Nothing personal.

Now I don't watch TV so I'm not exposed to all the political ads hitting the airwaves as election day draws near. But one of these ads upset Democratic congressional candidate Charles Dertinger enough for him to call foul in a press conference yesterday. He later issued a press release detailing his complaints about Congressman Charlie Dent.
Apparently, Dent has attempted to link Dertinger with former campaign consultant Michael Solomon. Actually, if Solomon was linked to anything, it was the dough. He spent most of his time hovering around Glenn Reibman, lining up county contracts and taking a cut here and there. Solomon got a little greedy and eventually ended up in federal prison. Although Solomon did do some campaign work for Dertinger in 1999, no one at that ime suspected him of anything. And Dertinger met him five times tops. He's met me more than that. I hope no one tries to saddle him with my sins.

Let's stick to the issues, whether it's health care, Iraq or social security. No need to resort to name-calling or mudslinging. Leave that to us bloggers.
Update: For an account by a real reporter, check out Sarah Cassi's story for the Express Times, including Angle's assertion that Dertinger is a "loony." That might be good radio but it's not right in a Congressional campaign.
Posted by Bernie O'Hare at 9/15/2006 12:02:00 AM

This shows that the polling numbers for Dent must be a lot tighter than his DC Republican consultants anticipated.

That means that "Pretty Boy" Charlie has to go on the attack right out of the box. The reasoning behind that strategy, of course, is that Dertinger will not have enough money to counter-attack and, therefore, these charges will stick.

Responding in the newspaper to a TV ad that is running in heavy rotation is like showing up with a butter knife at a gun fight. If you're very lucky, it may postpone your inevitable grisly death for a few fleeting seconds... but it is 100% CERTAIN that you will be dead and cold and buried very, very suddenly (regardless of whether the accusations are completely factual or not!)

It was a tactical decision. The spread was too close for comfort. Better to take Dert out now before his numbers have a chance to grow. By poisoning the well now and suppressing Dert support later, Dent's DC consultants are taking no chances, cherry-picking easy swing voters early, and setting up Dent's "Hollywood positves" for closer to the election (54 days away).

Dertinger can whine and cry and call news conferences all he wants. Unless he can match Dent ad-for-ad on TV with a strong counter-attack, his numbers will soon be in freefall.

Welcome to the NFL, Dertinger! This ain't bean bag and the RNC takes no prisoners... they have the bazooka pressed squarely between your eyes and have already pulled the trigger.

Like you, I rarely watch TV so I haven't seen the ad. But, am I surprised that false or mis-leading information is presented? Hell no!
Perhaps Dent is trying to show his party that he can be the next Ricky Santorum (who is putting out similar crap on Casey).
While democrats are not innocent of this type of bullshit, it seems the republicans have taken it to a new low.
dg

dg & anon 1:51, Dertinger comes from the bloodsport world of NC politics, so he's no stranger to dirty politics. Dent, who is extremely popular (even among Dems and has a huge spending edge), did not need to do this. But he obviously felt he did. Why?

The one person who voters are going to associate with all Rs in this Fall's election, whether they like it or not, is George W Bush, who seems to be on a one man mission to destroy his own party as well as the rest of the country. Whatever numbers Dent can generate on his own will be depressed when voters actually get to the polls and start thinking about GW. So a 10 point lead may actually be only a 5 point lead.

But go negative? Dent's strongest plus is his affable personality. Why risk damaging that perception by going negative? And why risk it on a matter where he is factually wrong?

I think it was a mistake and surprisingly low.

Now the temptation will be to come back and tie Dent to the corrupt practices by some Republicans. This is also a mistake, especially when we have real issues to talk about.

What about the 800 lbs. gorilla in the room - Iraq? What about healthcare? Prescription drug prices? Our dependence on foreign fuel? Global warming? The obscene federal budget? Those are real issues and they need to be discussed. I don't need to hear that Dertinger is a "loony" or that Dent is mysteriously tied to Abramoff.

Well Bernie, it is political season, and you know what that means. Mud, Mud, and more mud.
Unfortunately, negative ads seem to work.(unless you count the Mann-Browne PA-16 Senate race)
How do Republicans simultaneously play so dirty and portray themselves as victims?
Amazing isn't it?
I am not a victim, I am a warrior, and unlike the several emails I received this morning saying I was a victim because of how I was portrayed in a Morning Call article, I disagree. I dived into a pool full of sharks, and they like fresh red meat, so I better learn to swim fast.
I think Dan Hartzell was fair, and I can square one misstatement away. I don't run or hide, I tackle it head on.

Bernie, thanks for your support of the idea that issues are what people should vote on, not personality or innapropriate negative tactics like the Solomon issue. Most of all, not insults and name-calling.

Here's hoping we can find away to actually bring that about. I guess in a way I am an eternal optimist and an eternal pessimist at the same time.

I have to disagree to an extent. We vote for canidates not just becuase they represnt a certian view or issue, but on the type o na quality that person is. You can't vote for someone jsut on the issues because there are times when canidates flip flop on issues once they get elected.

I have to say this about Norco politics, it is sad. I have only been going to county Council meetings since August 2006. And I would have to say that I would rather go to a township meeting. I don't care for how their is ony public comment on issues at th beginning of the meeting. Also, I don't like how President Grube, says that McClure and Branco ask too many questions and talk to much.I don't get that. I didn't know that council meetngs wher aobut rubber stamping things just so the old man can leave deraly and get to bed on time. If he dowsn't want to be there, then maybe it is time to get out.

But what I really don't like is the way Dertinger and McClure act. They both show a lot of immaturity. At least that is what I have seen.

To LSTresidentPIA, Going to a Council meeting is almost always a show. It's been that way for many years. I can remember a time when it was quite a distinguished body.

FtnHillDem, Unforunately, I think this is just the beginning.

Let's hear it for Exxon Charlie Dent's "affable personality." Just what we need. Together with his combat-dodging Commander-in-Chief Bush and his draft-dodging Vice-president Cheney, Exxon Charlie will lead us to glory the way Bush/Cheney did on 9-11. I suggest this for a campaign slogan for Exxon Charlie: "Charlie Dent Smiles Good, Like A Crocodile Should."