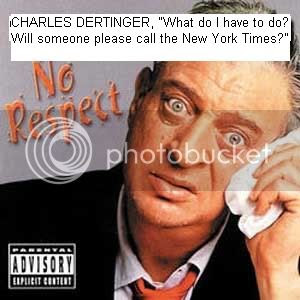 According to the liberal New York Times, there's no Congressional race in the Lehigh Valley this Fall. Its election guide, believe it or not, lists this area as "safe Republican." And the Gray Lady also insists Rep. Charlie Dent is running unopposed. This must be news to Democratic nominee Charles Dertinger. Like Rodney Dangerfield, he gets no respect, even though he just managed to pick up endorsements from the AFL-CIO, Building & Construction Trades Council, and International Brotherhood of Electrical Workers (IBEW). He's fighting an upstream battle, even within his own party. One knowledgeable insider tells me Dertinger was actually excluded from a recent local fundraiser in Lehigh County. In a swing district that went Kerry's way in the last presidential election, why is this happening?

On Wednesday at 7 P.M, the Northampton/Progressive Alliance will be hosting a Q&A session with the Democratic candidate Charles Dertinger. The format? A roundtable discussion at Wegmans in Bethlehem off of Route 512. Dertinger can expect some tough questions from local progressives. If you have a few minutes, drop by and meet Charles.

I'll let you folks in on a little secret. I met both Charles and Charlie separately this summer for a very long chat. (Dertinger loves tea while Dent likes cobb salad) Both are very well-informed, hard working, and concerned about this district. We could do a lot worse. And both are actually fairly level-headed, no matter what you may hear from either side. I've been highly critical of both candidates in previous posts, but they impressed the hell out of me when I met them. Dent, in particular, is a very unassuming fellow for a Congressman. I'll be writing my own assessment of each candidate in the weeks to come, but it's more important now to hear what they have to say.

Not only is C/D taking a beating from his own Dems, the Greens have thrown their worthless .05 % at him.

Greta Browne? 0.05% may be an optimistic projection.

As far as dissension within the Democratic party is concerned, I've only heard this from one person, but he knows what's going on.

area Dems have never had an answer for Dent which is a shame b/c he's a lot of style and not much substance.

I think you're right about Dent being a nice guy, level headed, and all that stuff. And while he wasn't in Washington when the Iraq mess started, he's done nothing but go along with his party on that and just about every other issue. He needs to be voted out of office.
dg

dg, They're both very well-informed and articulate. But while Dent is well-known even among Dems, Dertinger is not even acknowledged by the liberal NYT. It's not that he's not out there, but most people still don't know who he is.

LVDem, They both really impressed me. I had to fight the urge to ask each for their autographs.

Bernie said, "They both really impressed me."

Ask Dent where he stands on the Iraq war and holding Bush accountable. You'll quickly lose any good impression you may have held of this man who votes corporation over the people.

r.moshki said, "C/D taking a beating from his own Dems"

If this were true we never would have gotten him on the ballot with a remarkable amount of write-in votes, and this for someone lacking major name recognition. Done thru the hard work of those who support his run for this position so we have a voice for us and not special interest groups.

Anon 9:41, I know that Dent is a Republican who supports big business. Philosophically, I can't agree with him. But on a personal level, you can't help but be impressed. I understand that we are in the middle of election season, where easch side tries to villify the other. What I'm saying is that they're both very interesting fellows, and that Dent in particular is quite charming. You have to remember that because that's what most people think about wehen they thiunk of Dent. I have a customer who is a liberal Dem. She dislikes Bush. But she happens to know Dent and really likes the guy. The politics of personality is quite powrful, especially in a race for Congress.

To Anon 9:45, You're certainly right. But what's unfortunate for local Dems is that we had to run a write-in candidate in the first place. There's no getting around that.

I've known Charlie Dent on a professional basis for years. He is a personable, hard-working guy. But, politically he is afraid of his own shadow and will NEVER take a principled stand if it would cost him 2 votes.

He's been the "darling" of the Morning Call for 10 years--someone who shows up, looks good, and doesn't make waves. If Dent assassinated the President tomorrow, the Morning Call would mention in the very last paragraph of their story that he "happened" to be at the same place as Bush when he was shot.

"Sir Charles" Dertinger, however, has no personality, zero charisma, and the IQ of a frog. Joe Long is 0-for-2 in recruiting serious Congressional candidates. Speaking of which, WHO was the last candidate for ANY office that Joe Long ever recruited who actually WON a race? Hmmmmm, let me think...

I don't know who you are, but you always have me rolling on the floor.

Don't hold back. How do you really feel?

Joe Long has been rated among the worst local party chairs. He was also elected before comitteemen were formally notified they were committeemen. I know one committeeman who, as a result, was denied the opportunity to vote against Long, as he would have done.

Joe Long is a labor goon who can't even deliver 10 votes from any of the local unions that are on life support.

I've heard about his power plays on the Bethlehem Housing Authority. I also hear that Callahan will soon replace him because he cannot play nice with others.

If you ask me, Jack Burke of Bethlehem should be the County Chair because he knows how to win elections and deliver votes for local candidates.

I've heard plenty of oggd about Burke, plenty of bad about Long. My own interaction with the guy leads me to believe that, in addition to everything else, he is very thin-skinned. I didn't know he sat on the BHA. I'll check into that. Thanks.

I can't believe that all the commentators so far have either never read "Indispensable Enemies" by Walter Karp or think it was fantasy and dismiss it. The local Democratic Oligarchy sees the Republican Party hack, Charlie Dent, (first term lap dog, chicken hawk, rubber stamp for the draft-dodging worm Cheney and the combat - dodging Posseur in Chief, Bush) as UNBEATABLE!) Can you believe the mind-numbing profound mental retardation of the local Democratic establishment? They send a no-name against a hack?? In a district that is overwhelmingly Democratic by registration? The reason that I came within an eyelash of being the U. S. Rep for the l5th District in the 80's was because we were able to raise 3000 $, well 2700 $ and we conducted a campaign. Christ on a crutch, where are the progesterone and estrogen of the opposition? Maybe they think that silence is the winning strategy, but silence is the voice of complicity and silence poisons the soul (the latter from Spoon River Anthology and the former from a bumper sticker). The Democratic Party, the Republican Party and the big Labor mahaffs are in collusion to keep the power intact and the masses stuffed and somnolent (Phil Berrigan).