Are Gov't Officials Sandbagging Us About Local Flooding? 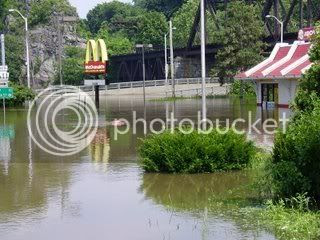 Northampton County Councilman Ron Angle is not a happy camper. For three times in two years the Lehigh Valley has been deluged by floodwaters that are supposed to occur only once every hundred years. Angle wants to do something about it. Too bad the U.S. Army Corps of Engineers and Delaware River Basin Commission don't feel the same way.

Many think rampant overdevelopment in the LV is the chief cause of all this flooding. But according to Angle and The Express Times, waters released from upriver reservoirs exacerbate the problem. He believes these artificial lakes should be kept at lower levels so that they don't overflow into rivers during times of significant rainfall. Three New York reservoirs, each over fifty years old, are always maintained at 105% capacity. PP&L also admitted releasing water from Lake Wallenpaupack at the wrong time of the year, which increased river levels.

Angle has repeatedly attempted to schedule hearings with the Army Corps of Engineers and Delaware River Basin Commission to see what can be done locally to mitigate or prevent future floods. But he's been completely ignored by both agencies, which frankly is insulting to LV residents.

The very next day, we learned from the Express Times that the same officials who've been ignoring Northampton County Council, need $500,000 to "study" how manipulating reservoir levels will affect flooding. If they get any money, I suggest they buy some phones. It would have been nice if anyone in these government agencies had enough respect for LV residents to at least respond to a Northampton County official. But are they really interested in solving the problem?

I see nothing wrong with a study, but it should accompany immediate action. Reservoir levels need to be reduced or we will soon have a fourth and fifth 100 year flood. But do politicians have the political will to do anything? I'd like to see a study on that question. People with summer homes near manmade lakes will be quite upset if water levels drop. And they vote and contribute to campaigns. Their property values may go down with water levels, but at least their homes won't be floating away.

So what's it going to be? Are government officials really interested in solving the problem or are they sandbagging us? I know this much. They move a lot more slowly than floodwaters.

New Jersey attorney Jeff Russo thinks government officials are sandbagging us, too. Today's Express Times tells us he's filed a notice of intent to sue New York City on behalf of flood victims. In Russo's words, "nobody is taking the lead." And Russo does not think we can wait for the year or more that the flood mitigation study will take. "We can't wait that long."
Posted by Bernie O'Hare at 9/26/2006 09:58:00 AM

Though I feel bad for some of the people who live along the river, many know that they live in federally designated flood plains and we keep bailing them out financially.

We need to create laws tht say that you can't live in a flood plain and that if you do, then you bare the resposniblity for damages.

Lst, I think that's part of the answer. But so is lowering reservoir levels. And why are government officials not moving more quickly to deal with what is obviously a crisis?

Bernie, the last time you posted the Mc Donalds Island picture a near riot broke out!

In reality this is just overflow from a secret prison we maintain for terrorists. The excess H2O is due to the CIA using the non-torture method of water boarding.
Seriously though, Lst makes a good point. But that doesn't excuse the release of water from upriver.
dg

DG, Lst does make good points. People who live right next to a big river like the Delaware need to think seriously about moving. On the other hand, the flooding has extended far beyond river banks. Three 100 yr floods in 2 years is a bit much.

I agree there's no "silver bullet," but lowering reservoir levels will certainly help the situation.

As of now, no action has been taken at all. That's inexcusable. And I can't believe the lack of respect shown to a local government. Angle actually wanted to issue subpoenas, but Council wouldn't go that far, at least not yet.

I think it I very abrasive for officials in New York to not consider maintaining a lower water level in their reservoirs, if not inhumane.

While lowering the resiviors would help minimize the flooding, we should not let it distract us from the probable cause of it, outward growth and sprawl instead of planned growth an urban renewal.

This effort should be two pronged to show the officials in New York we are taking responsibility and we will not be back in 30 years demanding they lower levels again to hold back all water every time it rains in the Lehigh Valley and the Poconos.

To my knowledge, nothing is being done to address this issue on this side of the Delaware, am I correct Burnie?

As a former North Second St resident for 2 out of the 3 "floods of the Century" I have to admit, I actuall agree with John Wayne Gacy!

I think it I very abrasive for officials in New York to not consider maintaining a lower water level in their reservoirs, if not inhumane.

While lowering the resiviors would help minimize the flooding, we should not let it distract us from the probable cause of it, outward growth and sprawl instead of planned growth an urban renewal.

This effort should be two pronged to show the officials in New York we are taking responsibility and we will not be back in 30 years demanding they lower levels again to hold back all water every time it rains in the Lehigh Valley and the Poconos.

To my knowledge, nothing is being done to address this issue on this side of the Delaware, am I correct Burnie?

Damien, I believe that Charlie Dent conducted some sort of tax force at Lafayette not long ago, but not much happened there. Ron Angle, the Evil One, jumped on the idea of lowering reservoir levels. It's not a "silver bullett," as Rendell is wont to say, but that's something that can be done right away. Dredging and levees take much more time and money.

Angle attempted to get a council committee to meet with the agencies that are supposed to be working on flood mitigation, but they completely dissed him.

He actually wanted to subpoena them, but Ann McHale was having none of that, at least for now. For one thing, how does a county official subpoena a fed?

But right after adopting a resolutiuon to try again, the Express Times reported that these agencies want $500,000 for a study,which will take at least one year to complete. Does that make sense in the face of such an immediate problem?

I really do believe that most government officials are sandbagging us instead of the river. And Northampton County Council, as disfunctional as it may be in so many respects, spoke with one voice for once.

But nothing is being done on ourt side of the Delaware, Damien. You're suggestion that we take responsibility and start making our own plans is very well taken.

Spike, If it makes you feel any better, you can take consolation in the fact that Angle's measure would never have passed w/o help from Dems.

If you get Ron away from partisan politics and into the business of governing, he is very effective. Very few have his insight or quick grasp of situations, like him or not.

We keep paving ground and then wondering why the rain doesn't soak into it instead of running off and causing flooding. Duh??? A lot of this is being caused by new patterns of runoff caused by development.

PaProgressive, You're right! Water is not absorbed that well by asphalt or concrete. It's a serious problem and it needs to be addressed, not ignored.

You bring up an interesting point about the homes around the lakes in New York. Ironically, the same thing may be stopping action in New York as here in PA, land developers.

This is tough one, common sense would tell residents here that the easier fight would be here in PA, where they vote. Battling a single government agency (or two) like the Delaware River Authority and NY Water may be easier than challenging the rights of all of the unimaginative cul-de-sac developers of PA.

Although I am convinced that is what should happen in the long-run, I am not convinced it ever will. The reservoir rout also will yield immediate results, but is not a long term solution in my opinion.

This is a tough one, Time to move upstream to the Great City of Allentown ;) !!!

Damien, the Great City of Allentown should put you on its payroll!