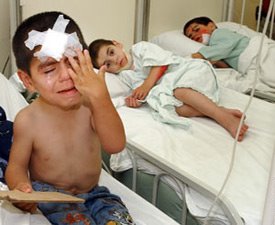 The name "Yom Kippur" means "Day of Atonement," and that pretty much explains what the holiday is. It is a day set aside to "afflict the soul," to atone for the sins of the past year. This year, Yom Kippur is October 1.

I'm not Jewish. If I were, I'd need more than one day. "The Day of Atonement absolves from sins against God, but not from sins against a fellow man unless the pardon of the offended person be secured." Some Jews in Israel might need a bit more than a day, too.
Posted by Bernie O'Hare at 9/30/2006 11:55:00 AM

Email ThisBlogThis!Share to TwitterShare to FacebookShare to Pinterest
Labels: Israel

This would appear to be a pro-Hezbollah, pro-Fatah, pro-Hamas, pro-PFLP post.

Mr. Moshki, It is none of those. It is a pro-human post. Many Lebanese and Palestinians have been senselessly slaughtered over the past 60 years. Israelis cannot escape moral responsibility for their crimes simply because they happen to be Jews. I don't like car bombs or scuds launched at Jews but also don't like to see Lebanese children murdered. Since today is Yom Kippur, some Jews in Israel might want to think about that.

Propose a policy alternative, Bernie. You can't attack people who hide among civilians without hitting some civilians - I know you don't intend to be pro-Hezbollah (hell, for those of us who are progressives, Hezbollah's worldview is totally anathema) - and you can't give 'em a free pass. What would you do?

There is little that Israelis can do when Hezbollah integrates into the civilian polulation. I understand. And I understand that Israel was dealing with missles being launched indiscriminately by barbarians. But an attack on a hospital? A lot of what happened was indiscriminate killing. And the assertion that Hezbollah had blended is not entirely accurate. Most of the missles launched came from bunkers, at least that is what Robert Fisk says.

I think some of the Israelis overreacted in Lebanon.

Yes, after the 1948 war, the only humane thing the Arab countries could have done was to accomodate the refugees, take them in.

But no, for nearly 60 years the 'problem' has been allowed to fester and mushroom into a global
war on terror. For what, a small piece of land the Arabs want but certainly do not need.

Moslems are killing Jews, Christians, Hindus, you name it.

Ya see, to be "pro-human" you need to be anti-Religion.

P.S. Israel has failed to get back
those kidnapped soldiers--Sharon would have blasted until Hez cried unk-lee.

To Mr. Moshki: If what you say is true, then it is fortunate that Sharon is no longer making decisions.

Wow, Bernie. I am amazed at the response that just one innocent sentence can have. You have my admiration on this one.

Any consideration for Israel's use of cluster bombs that are still killing innocent civilians? For Israel's fatal attacks on UN outposts?

Israel is a state, and not a religion. It actions are to be judged on that basis.

FtHillDem, It's funny. My short posts usually yield many more comments than the long ones. I thought this was going to be an exception to that rule until yesterday.

You make an important distinction. There's a big difference between Israel the state and Judaism. I don't believe that some of Israel's actions are consistent with Jewish principles. And I do think some Jews in Israel need to atone.

Ehile Condi Rice, finally started working out the terms of a cease fire, Israel was launching missiles against an apartment building. There was no need for that.

Religion is the mask of sanity behind which is the utter lunacy which has us killing each other over nothing.

After 7000+ years of a thousand failed gods, it might be time to try something else.