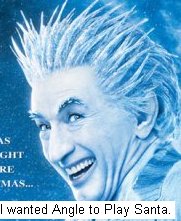 HOLLYWOOD: Those of you who think former Northampton County Exec Glenn Reibman is content with his job at the Delaware River Joint Toll Bridge Commission, think again. He's a man on a mission. Yes, siree!

In fact, he'll soon be making his film debut as Jack Frost in Santa Claus 3: The Escape Clause. Contacted on the set, Reibman explained, "If actors can become politicians, why can't politicians become actors?" Reibman, who often refers to himself as the "county executive of the future," claims his eight years as chief county honcho was great training for his current role.

"For eight years I ruined Christmas after Christmas for county employees. You should have seen the looks on their faces the year I gave them flimsy plastic ice scrapers. That was priceless! Now I get to replace Christmas with Frostmas and ruin it for their kids, too."

Reibman defended his appearance at a ribbon cutting ceremony for the Lehigh Riverport on September 11. "The next time a piece of Manhattan disintegrates, I want New Yorkers to know we'll have reasonably priced condos waiting for them right here in the Lehigh Valley."

Reibman also insisted the new rotunda at the courthouse expansion is actually a miniature rocket ship built as an escape pod for himself and the judges in case of national emergency. "I think of everything. That's why I'm the county executive of the future."
Posted by Bernie O'Hare at 9/13/2006 12:02:00 AM

I think you have been watching to much Sci-fi Channel!

wow bernie, the stuff that comes out of your head is just twisted.

I wasn't taking my pills yesterday.

Let me get this straight, you want Ron angle as Satan, and Reibman as Jack Frost. Who is going to stop them, Batman? Perhaps you could play the Riddler, and Russ and John could be Batman and Robin.
Recruit Lehigh County Redneck as Catwoman, and I buy a ticket

OOh, OOh, my superpower would be the ability to make men helpless!!!