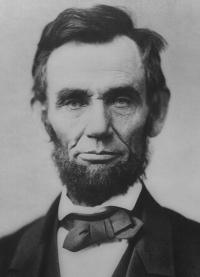 Both were tall, awkward and gangly men with large hands calloused by hard labor. People sneered at both when they first took public office, certain they'd been elected by accident and could never last. One of these men, Abraham Lincoln, is arguably our greatest president. And the other fellow, John Stoffa, will probably be remembered as Northampton County's best county executive.

I was at Stoffa's house Wednesday night. He threw a little party for his former campaign manager, Russ Shade, who's looking to upset Julie Harhart in the state rep. race for the 183rd legislative district. I read LVDem's post and decided to crash it. I wore my Angle disguise and slipped right in. Stoffa didn't mind. He's easy that way.
I'll let you all in on Russ' terrific effort in the next few days. Local luminaries decorated this little shindig like Christmas tree candles, but Stoffa was clearly the shining star. He introduced Russ by telling us, "I first met Russ Shade on the Internet ... ." When we finally stopped laughing, he actually said very few words that had more meaning than anything I've heard any politician say for some time.

"There's nothing wrong with government. But sometimes, some of the wrong people are in government."

"Everybody should run for political office at least once. If you lose, you're no worse off than before. If you win, you might get something done."

Like Lincoln, Northampton County politicians are finally beginning to see Stoffa's qualities, and that's good news for this county. Before I left, I wandered through a few rooms, and was amazed by the number of books strewn about, written by the likes of Hemmingway, Faulkner, Vidal and Vonnegut. I'm not honest like Lincoln or Stoffa, so I stole one of them. I've already tossed the cheap yarn Stoffa was using as a bookmarker. I'll sell it at a yard sale.
Posted by Bernie O'Hare at 9/14/2006 12:04:00 AM

1) I can't believe you actually stole a book from his house!

2) Stoffa will never finish out his 1st term--and that is the only way he will make history.

3) Harhart is always underestimated, but she will kick Shade's ass.

Anon, You're a sharp cookie but you're way off about Stoffa. And I remember your bet challenges. Care to bet me on #3? Thanks to the Jersey migration, the 183rd is now a Democratic district. Harhart is vulnerable, and I think you're underestimating Shade. So you wanna bet? Feelin' lucky? I'm not talking about something mundane like money. I'll think about the stakes today.

I rated this seat as most likely to change party hands in the Valley. Russ knows what he's doing.

LVDem, Stoffa scored an upset against Reibman. His margin of victory over Nyce was much greater than expected. Part of the reason for that is Russ Shade.

Like you, I'm thinking upset, and that's why I'm challenging Anon 12:22 to a bet. I don't want to bet money. We should be spending our spare change on candidates. This guy always likes to write 1), 2), 3) etc.

OK Anon, you're on! I'm thinking of stakes today. Right now, I'm thinking that the loser takes Reibman to the swingers' club in Coopersburg.

You'll come on line around midnight, so let me know then.

Bernie, you have to bring Sylvia to Kama Sutra, But Reibman? I'm not sure I can get one of my lady friends to go if he is with you.
Okay, I'll come as catwoman, I'll get a friend to be Batgirl, you come as Riddler, and Reibman? How about King Tut instead of Jack Frost? Frost makes certain body parts more firm, and we can't have that!

Bernie, the folks at the swingers club in Coopersburg posted a comment on my naked Blog inviting me and anyone else to come down. I just have to tell the bartender that naked Blogger is in the house.
I'd really prefer to go incognito, and my husband is apprehensive, but agrees I should recruit a guy to go as my "partner". I joke with you, but I think it better that I stay anonymous to you. So with that, this weekend I have two people who are going to check it out.
Thay do "errands" for me on occasion, and are very good at tracking down dead beat Dads and Moms. I will share their observations come Monday!

I think stoffa is a well-intentioned man (which is half the battle), but i still doubt his ability to govern effectively.

He comes with a social services background, where upper level management thinks weighty and deliberative thoughts, but don't often accomplish much. I worry that stoffa simply can't make the quick decisions the cage match that is norco politics requires.

DemFly, I can't wait to read your report.

Anon 12:05, People thought that about Lincoln as well. Well-meaning bufoons. But last night I saw anther sign that impressed me about Stoffa and another Lincoln quality. In attendance at his soiree were some of the very people who had belittled him when he first took office. They've either come around or are on their way. He needs all the help he can get. I don't say this to besmirch him but say it because the county is in crisis.

It will take time to set the county back on the right path. There are many obstacles, from employee morale to fiscal worries to judges that are out of control. And some things, like the Taj Mahal, were just too far along to be stopped.

But I'm sure now that the county is in good hands. I understand your concern, especially given our recent track record.

Hey Bernie, what happened at the Dertinger Press conference?
Morning Call online has nothing. Congressional candidate has public conference and media doesn't show?

Anon 2:46, Unfortunately, I had a MD's appointment this AM and missed most of the press conference. I did get a release from Dertinger a few minutes ago and will put it on. The press was defintely there, and I'm sure they'll run a story.