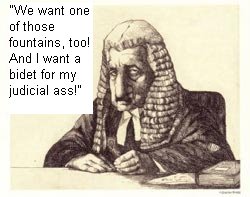 Lehigh County's judges aren't happy. Northampton County is getting a luxurious $42+ million courthouse, complete with wind sensitive fountains, cool tunnels, and private potties for just about every judge. Lehigh's judges think they can do better than that, and are rejecting a proposal from Lehigh County Exec Cunningham that will keep costs under $60 million.

"To hell with the cost, we're judges! We can sit your ass in an electric chair if we want."
To pay for the disaster in Northampton County, over 100 positions were axed and taxes increased nearly seventy per cent over two years. Those employees left have suffered with frozen salaries for three years while President Judge Freedberg traipses off to Europe and the court administrator summers in Australia instead of his Cape Cod home. The project is nearly a year behind and $3 million over budget.

A few weeks ago, LVDem told you Lehigh County judges actually wanted a private meeting with commissioners. And these are the guys who supposedly enforce the Sunshine Act! No wonder there's so many flagrant violations.

In his latest display of judicial arrogance, President Judge Platt told commissioners he'd rather see no expansion at all than go along with what the county exec proposes. And DA Jim Martin is threatening a criminal negligence prosecution.

Platt and Martin would make great schoolyard bullies, but should have no say in how the public's money is spent.
Posted by Bernie O'Hare at 9/08/2006 04:15:00 PM

It's the same old story of "play for pay."

Governments like Northampton and Lehigh counties "negotiate" cost-plus contracts instead of fixed-fee.

Under cost-plus, the taxpayers eat the cost overruns; under fixed-fee, the contractor eats them

Until the counties and other governments utilize competitively bid, fix-fee contracts, taxpayers will continue to eat the overruns.

Until them, it's good news for A.H. Butz Inc., bad news for taxpayers.

The counties and other taxing jurisdictions have also helped cut the taxpayers' throats by granting tax exemptions (lERTAs, KOZs, TIFs, etc.,) that accelerate development faster than tax assessors can assess real properties and get the assessed value (i.e., revenue) on the tax rolls.

You make several salient points. Thanks.

Hey Bernard V. III: Don't slam Judge Platt. While he may ignore Article VI, Sec. 2 of the U. S. Constitution, and the Pa. Bill of Rights, and a dozen international treaties, he did convict the Dent Nine. That should have you singing his praises rather than slamming him for graft.

To Anon, Yeah, but he didn't have them torutured or sent to jail or something.

is she the same fag hag that bernies little buddy fucked?

is it true your dad was raped anally while mom watched tied up with jumper cables attached to his perky nipples?

Wow, FU! You sound like you're really dedicated to peace and non-violence.

No, on second thought, you sound like a right wanker.

FU, I'm afraid that you only diminish yourself with that kind of comment. Perhaps you think it's funny, but I think it's sad. Most of the people who comment on this blog offer very intelligent remarks, even when they are disagreeing with me. And since I'm not the pope, they may even be right from time to time. But what you just did is make PJ Platt and DA Martin looks like a bunch of thugs. I don't think they deserve the kind of help you want to give them.

Bernie, When I first read that tasteless comment I thought you should delete it. But you are right to let it stand. We have great dicussions here and when you get mindless drivel from a moron it makes the rest of us look good.

I considered deleting it. Whoever did this made similar comments on four of my posts. In one of them, he actually threatens me. Not terribly bright.

Who could I have pissed off so much that he would act like this? Altright, I admit it, it's a pretty long list. But I still don't want to play censor.

I'll let comments like these stand so long as they don't discourage the comment that makes this place interesting. I really enjoy the commentary from the very interesting (and funny) people who visit this blog from time to time. It's very encouraging to know that people really do have opinions and are willing to share them. And I've learned from the people who contribute.

My suspicion is that FU was just trying to be funny and blew it. Interestingly, he's not anonymous! He's actually a registered blogger, so he shouldn't be too hard to track down in the event I suddenly disappear. Now I wonder who's knocking at my door.

You can put a robe on a Jackass, but your still left with a Jackass!