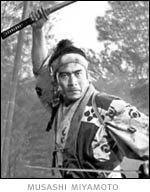 Ever watch a Samurai movie?. I love them. They remind me a lot of westerns except there's a lot more blood and severed heads flying through the air. Despite their brutality, these sophisticated warriors had their own code. "The Way of the Samurai is found in death. When it comes to either/or, there is only the quick choice of death."

A friend returning from Japan once gave me a samurai sword letter opener. It's only six inches long, but think twice before coming after me, bippy. I've watched Zatoichi, and I think I have his moves down.

Honestly, I don't think I'm cut out for samurai life (or should I say death?). I'd be better as a masseur or geisha or something.

But whether ninja or damiyo, you'd like this cool Japanese name translator . Some names don't make much sense. My name roughly translates to "straight tree near a crossing." Guv' Ed Rendell is a "large radiance around wisteria fields." Huh?

But George Bush's name is the most appropriate - "mighty blow to a country of good fortune."

Well, I tried it and found a nice translation for my own name. I wasn't sure if it fit, so I thought about the other names you presented. Now I don't know what wisteria fields have got to do with the guv., but he is a rather large radiance. And the translator was certainly accurate on George W. So I must conclude that I am a green river open to the sea.
dg

dg, I would argue that a rivr that moves to the sea implies an ability to change, openness, tolerance. I'm a straight tree and I think that means I'm thick headed. My mom used to tell mne that every day, but I wasn't really listening.

For those of us who (1) are sick of all the fraud, pomposity and murder from Religion,

(2) who believe non-human animals should not be caged, tortured, slaughtered and eaten,

there is no choice.

Karoly is a hunter/trapper, fur-coat afficianado and also a relgious freak.

Dadday stated the "entire show is gonna be about Iraq." Lie. The show was about Karoly.

Those of us with the legit. 'compassion gene' are reduced to ranting on blogs.

All we want is what innocent animals want, NOT what we want.

1. Karoly took a few swipes at Bush but did not denounce the Holocaust in Iraq.

Animal Rights/Liberation calls for
not hurting the genuine "least of these." it has nothing to do with 'us' or what we want for ourselves.

On abortion karoly would be the pick over hannity but they are essentially twins.

You will recall what Will Rogers said.

Then I typed in my name and it said: "Big Bad Booty Daddy."

I'm satisfied with both translations.

To Monsieur Moshki, I listened to the show this morning on WGPA. I have to tell you I like Karoly. I've known him a few years and he'd give you the shirt off his back.

But it sure was a lousy interview. Russo, on of the hosts, took a flier. The other co-host, Daday, announced he won't be back fro several weeks after today because he is having weekly Friday morning meetings with his lawyer John Karoly. He also made clear he would only accept calls about Iraq.

Fort weeks, he has been waging a war of character assassination against Stoffa, Bill White and Ron Angle. Now Bill White and Angle can take care of themselves, but why was he going after Stoffa? This is a show in which both he and Russo said they weren't going to be attacking other people and were only there to promote Dems. Well, Stoffa is a Dem last time I checked. And he does not roll around in the dirt.

Last Thursday, I guest-hosted Angle's show and tagged both Daday and Russo for their vicious attacks on Stoffa. This week, news about Daday's unusual collection of unemployment benefits surfaced. Although he had resigned and should have been unable to collect, he got Reibman top "fire" him right before leaving office so he could collect, and $8,000 in taxpayer money has gone his way.

I don't think that's a big deal but it was awful stupid for Daday to resign because that presented a problem that would not otherwise exist.

Now Daday is claiming this is retaliation for his critical comments. And now he's running away instead of answering questions about his conduct. And he brings Karoly on his show to talk about hunting and church in a show that was supposed to be devoted to Iraq.

This "talk" radio was not talk radio at all. It was a disservice both to Dems and Karoly, who has worthwhile things to say and is quite colorful.

Your assessment is right on the money.

To Big Bad Booty Daddy, You better hop on a plane and go to the Land of the Rsisng Sun. The ladies must be waiting for you. My name only means a frickin' tree. The only thing I'd attract would be woodpeckers.

I did my name... it means "man who searches for pants while drunk." I'm not so sure I agree, but I am missing a pair of pants.

Bernie,
A straight tree may be looked at as being inflexable (or if you prefer - thick headed). However, it may also indicate standing up for what one believes in and not bending to the evils around it.
Anyway, I'll accept your translation on my ability to change. As someone whose career was in sales and marketing in the wonderful world of electronics, one belief required to survive was that the "only thing consistant is change."
dg

And a river is always changing. You can't put your foot in the same river twice.

LVDem, Joe Long has your pants.

bernie, I just read the message you left at MM and I completely understand what you're saying. I'm just afraid it will take someone like a dictator to bring the violence down over there. It seems the only way to stop it is have someone that both sides are more fearful of than they are of each other. Sorta sounds like what they had, doesn't it.

POP, You're absolutely right. We had no business invading Iraq. We created the very instability that now concerns us so much.

Good post over at POP. I'm not sure I agree, maybe I do. I just like to see good argument laid out. Man, waist deep in the big muddy. I'm 57. gotta be around my age to get that one, eh? Nice blog.
Laugh.Or....
Else.

To the Laughorist: Yeah, I'm an old fart, 55 but I feel like 90 this week. Thanks for the compliment for the comment at POP's Morning Martini. Thanks also for the compliment on my blog. I've said it before, but I find the coimments are often usually better than the original post, and sometimes end up turning them into posts so that all can appreciate them. Take care.

Peace to you and your Bernie.
I saw yours at Pop too. Although I don't exactly agree with you on your comments, I perused your blog and found you to be humorous and your go ahead and do something about it attitude refreshing. Will visit again.

Thanks, Human. I'm not sure I agree with myself either. I especially appreciate the nice words about the blog. Arigato.