Trolls - The Price We Pay For Opinions in the Blogosphere 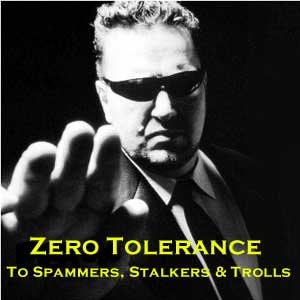 Blogging gives me an outlet for my very strange opinions. Editors, pols and reporters are thrilled that I finally leave them alone. Better yet, I get a wide range of comments from very interesting and entertaining people whose views always educate me, even when they differ from mine.

Well, I finally did it! I'm in the big time now, bippy. After last week's post about Santa Claus being spotted at Coopersburg's Saturday night swing club, I've attracted a troll. His name? F--- you. He posted some tasteless remarks here, here, here and here. One of them tells me "I have a pic of you now, you little c-------er ... payback is a bitch." This is the price we all occasionally pay for writing about anything remotely controversial.
I considered deleting the comments, which added nothing to anything, but decided to let them stand. Let me explain why. First, I'm no comment cop. Second, it helps explain why most bloggers prefer anonymity. Third, although most people who take the time to read blogs are well-informed, it's important to remember that we do have people like F--- you, who use mindless threats to intimidate the rest of us into silence. Last, and most importantly, the personal threat may be criminal, and I want to preserve the evidence.

I don't want to discourage people from disagreeing with me or with each other. Lively commentary in this blog is actually better than the posts. And I intend to take no action against F--- you, who is probably just some kid trying vainly to be funny. But I will delete future comments like the ones mentioned because they have a chilling, instead of inviting, effect on debate.

I'll take a few precautions the next few days. I'll substitute Arnold Schwarzenegger's picture for mine and do a few push ups or something to buff up. And by the way, I'm not really Bernie O'Hare. My real name is Chris Casey. I eat barbed wire for breakfast and know kung fu and stuff. Yeah, that's the ticket.
Posted by Bernie O'Hare at 9/12/2006 12:03:00 AM

Don't feed the trolls. If you ignore them they go away.

Free speech is a wonderful thing. And while I'm not a lawyer, I don't think you can yell "fire" when there is none, nor can you imply threating actions ala the idiot "F--- you." Time to ban that fool.
dg

I'd just sick the Redneck on her or that mean old man that posts from time to time on Gort.

So you use my name?! Thanks Bern!
I read that website LCR put out about responsible blogging, and I was impressed with how they can track you down. I have no doubt she could hunt down Mr "F" and make his life interesting!

dg, Next time arounbd, my approach will be different.

LVDem, I can't use the Redneck. DShe's after me herself. But I'll ask Gort to hook me up.

To Chris Casey: Oh, You're Vhris Casey, too? What a coincidence!

The closest I ever came to Kung Fu was General Tsao's Chicken, and I occasionally watched the TV show starring the "Grasshopper"!

F/U is deranged; the question is: is this protected speech?

It's not a direct threat or is it?

forget about the pushups. just show FU your Neanderthal chest and back---he'll start crying for his mommy

To Mr. Moshki: You're right. It's not a direct threat. He first claims to have my pic and then says payback is a bitch. It's probably an implied threat.

To Anon 9:08, You obviously know me. Perhaps you were one of my gay lovers. If my chest doesn't scare him off, wait 'till he gets a load of the hairy back!

i undersatnd both angle and hickey like you. why not turn those two losse on the troll?

Thanks for the suggestion.