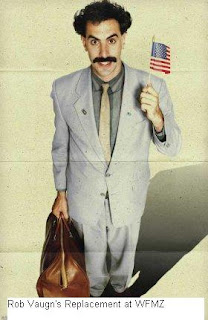 Someone is smoking funny stuff at WFMZ-TV Online Election Central. The election won't occur for another six days, but last night it posted voter results. In some cases, it has even projected winners!

Dean Browning, come on down! You've won your primary for Lehigh County commissioner without a vote being cast! That's what happens when you start commenting on this blog!

Sal Panto edges out Mike Fleck! Mike will have to return to the lucrative world of political consulting.

Chris Casey gets 78% of the Dem vote in his Upper Macungie. Now he can finally go on a diet.

Wayne Grube, although he's not running for anything, is lead vote getter for all offices. OK. I made that one up, too. If WFMZ can create bogus results, so can I!
Call me crazy, but it's kooky for a news organization, even TV news, to post results and project winners nearly a week in advance of an election. In fact, it's downright misleading unless WFMZ has obtained the results from voting machine manufacturers.
Update: WFMZ has now replaced its unofficial "election results" with a disclaimer telling us, "Every effort is being expended to make this page an accurate source of information. However, the Internet is both volatile and diverse." If WFMZ meant what it said, it would never have run artificial results or projected winners six days in advance of the election. What it did is both inaccurate and created volatility that did not need to be there.
Posted by Bernie O'Hare at 5/09/2007 12:02:00 AM

how irresponsible and damaging. i'm sure they were just testing but c'mon - that's just cruel.

in the bethlehem council race, there's over 100,000 votes. that's more than all the registered voters in northampton county combined!

will power and other candidates better print that page now - it's the closest they'll ever come to winning the election!

DO they have the results of the 2000 election? If I remember right Al Gore won that one.

This just in! It's official! Ron Angle has just been declared the winner of the 2008 Presidential elections. Canada and Mexico have closed their borders to stop flow of American refugees into their countries. More on this later. Back to you in Easton Bernie.

WFMZ should be concerned. candidates could take action against them. looks like april fools anyway checking the list! guess it was fun to screw up what real result will be and let the losers have a shining day. just poor taste 1 wk before election

um... I'm missing something b/c everybody has a big ole goose egg next to their name.

i guess somebody read your message.

they were setting up for election day. not results. they say just plugged in names of candidates and races. nos. didn't match up with no. of voters for each race. that's why there was no rhyme or reason to the winners! just a practice. Sorry, Will Power

Whatever the reasoning, it was irresponsible to do this and have the results all over the Internet. It was also deceptive, totaslly contrary to the very purpose for a news organization.

My psychic power says Bernie O'Hare will be elected thebiggest pain in the Ass in Noirthampton County by a landslide!

Amazingly all the candidates say easton is a city of 26,000. I wonder who the extra 1,000 voters were for the winners.

I guess alot of Pantos non city resident supporters came out and voted. Who knew, Wilson, Palmer, and Forks had so much pull!

And to think every registered voter came out in a primary! LMAO!

I think WFMZ uses a template for their election results and failed to remove old results and just added the candidates.
I saw the results before they were pulled, and it had Arcelay winning the Bethlehem City Council race with like 24,000 votes! If the winner gets 3,000 votes that is a good turn out.

Whatever they were doing, they were misleading and should not have been playing those types of games on the Internet.

Everyone complains about these touch screen voting machines, but they are incredible. With the mechanical machines it took human hands to generate results. Now a virus, or a hacker can help us find the results a week early. ;)

There's barely 20,000 residents in Upper Macungie. The only way I ever get 27,000 votes will be in Hell when they decide how to roast my rear end!

Hey, you don't need an photo id to vote each time, the dead needs representation too! Voter early and often.

It isn't like they had a link set up on the home page you had to manually type it in. Heavens for bid if they were just testing the website. Some people find any reason to bitch.