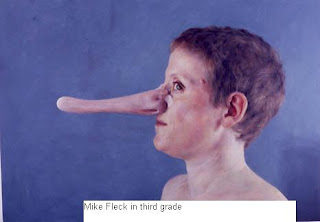 Last time Mike Fleck ran for Easton mayor, just four short years ago, he falsely claimed to be both a Moravian College grad and a business administrator at some used car dealer. When these embellishments were uncovered, Fleck paid the price. He finished third out of four candidates - in the primary.

He's baaaack!
But he's unable to shed his bad reputation. In March, he was sued by a Phillipsburg woman over $5,000 she claimed Fleck owed her. Now he's accused of fleecing Archie Follweiler's state house campaign. That claim appears factual. Fleck was paid $21,000 in just eleven weeks. And the negative comments continue. Amazingly, opponent Sal Panto is not the source of these complaints. They instead come from Lehigh and Berks County Dems who consider Fleck "a useless cash pit."

Monday, I heard from Kyle Scanlon, a former Follweiler campaign worker. State campaign finance records reveal Scanlon was paid $3200 for his campaign work. Here's what Scanlon says: "I am one of the few people involved who can speak with direct knowledge of the Fleck/Follweiler situation. The truth is, Fleck is a liar and Archie allowed the wool to be pulled over his eyes. Yes, Mike was overpaid. Yes, Mike is a politician whose glossy shine will wear off after a short while to reveal his lack of integrity and ability. He works very hard to his credit, but only does so to advance his own career."

I'm beginning to get the feeling that many Lehigh County Dems think Mike Fleck would make a terrible mayor. But they're not voting.

Bernie, I am not someone who has much faith in blogs. Never have been. But you are the man and you should be very proud over finding someone to go on record to make this comment. I am far to cowardly to do it on the record myself, even though I know what happened as well. To Kyle: well done. To both of you: Go to the mainstream media with this story, and Fleck will be HISTORY, once and for all.

GO PUBLIC TO THE PAPERS! Then you can legitimately stop Fleck!!!!!

I should point out that before going with this, I did ask Kyle to confirm his identity. He did so.

Much of this has already been covered in the mainstream. 1) Fleck's false statements in his first mayoral campaign were hammered home both by the ET and by Tracy Gonzo Jordan. 2) The ET reported the March lawsuit by the P-burg woman who claimed Fleck owes her $5,000, along with his "explanation" that the matter would be settled quickly. 3) The Follweiler and Pawlowski campaigns are something new, and I only discovered this bc LC Dems are very upset that Fleck just took the money and ran. I stumbled into that story thanks to people like Chris Cassey and LVDem, who know LC a lot better than I do.

Unfortunately, there is more, but I haven't been able to authenticate it ... yet. If I do, there will be more stories.

The papers are probably way ahead of me. I've seen courthouse reporters learn things in about an hour when it takes me several days. They are the pros and I view this blog as nothing more than a complement to the mainstream.

Ordinarily, I wouldn't consider a lawsuit over $5k as terribly relevant. But Fleck made that an issue because of what happened in his first campaign.

I don't get it. There are some pretty qualified, good and experienced democrats out there. Some are in office some were in office. Why does the party keep throwing money at candidates with either no record, a bad record or a losing record. It's a thing with dem's. I know some dem officeholdrs past and present who are ready to form a new party-the sane.

I got to witness Fleck in action last night at a Meet the Candidates Night. I'm not at all surprised to hear these stories about him.

He spent a good portion of last night making jabs at his opponents. That backfired nicely when he ridiculed Panto's ''meaningless statistics.''

Clearly, Fleck knows nothing about goal-setting and running a business, let alone a city. How can anyone expect him to live up to his promises when he's clearly comfortable with fleecing his own party?

Pawlowski??? Maybe someone should ask Ed himself. Because Pawlowski has attended fundraisers for Flecks campaign.

Would someone do that for a person who "fleeced" them?

And it was April 18th. So it was rather recent!

Perhaps Mike is a flawed person at times.

But is Panto better? When panto was Mayor downtown looked like a ghost town aside from the places owned by Bethlehem Township resident Larry "Rocky Marchiano can't carry my jock" Holmes.

Ask Sal Panto about his bankruptcy. What better thing to hear in a Mayoral candidate than that! He couldn't handle his own assets now he wants to handle ours?

Both candidates have flaws. Its only a matter of time till folks see Panto is just like Fleck.

The worst thing about this blog is its lack of anonymi.

The Panto bankruptcy had to do with the family business, a very successful neighborhood business with an excellent reputation. Mike would be foolish to even think about attacking that issue. We miss the store and the wonderful, hard-working family members that helped their father and mother. The bankruptcy was covered well in the local media and the fact is that the small business was being fleeced by a liuquidating company and Sal and Pam did what they did to protect their family. The article quoted Sal as saying he would do it again for his mom and dad." I also know that they, Sal and Pam, paid off a large number of outstanding bills and taxes.
This is old news and covered well. Place the two candidates side by side, list their experience, education and work history -- it's a no brainer. I am sure that Sal is doing better in the private sector than he will be compensated for as Mayor. The way I see it Easton needs Panto - Panto doesn't need Easton. Given the other candidates we should be glad he threw his hat into the ring. Vote PANTO.

for a moment there I thought that picture was you Bernie. You always talk about your big nose.

With all due respect to Ed Pawlowski's judgment, he didn't get much of an opportunity to witness Fleck's competency. Remember, Mike was hired in the waning days of the campaign, a time when candidates to be mayor of a major city have a habit of being a little bit busy.

Even if he did do anything especially amazing for Ed (he didn't... I was there), what bearing does that have on whether he'd make a competent administrator?

Sal Panto has his own drawbacks, and if he were running against anyone but Fleck, I wouldn't consider him for a moment. My tacit aquiescence to his side is further proof that this situation is literally ANYBODY but Fleck.