No Need 4 Speed: Do the Limit Challenge! 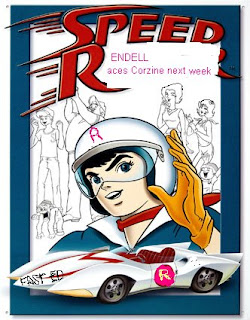 When Chuck Keiser and I were both foolish young men, we worked together briefly in a lab at JT Baker Chemical Company. I blew the lab up three times, and my fledgling career in science came to an abrupt end. But I believe I must have damaged poor Chuck, both literally and figuratively. You see, I continue screwing up nearly everything I touch. But Chuck, unlike me, appears to have grown wise in his old age.

First, he started the Do No Harm movement. Unfortunately, he waited until just a few months ago to tell me about it. Now that I've alienated most of the Lehigh Valley, it's too late for me.

Now he's starting something new - the "Do the Limit Challenge." I'll let Chuck tell you about it himself.
Hi Guys and Gals!

I’m attempting to start a another new movement.

Right now the working title is “Do The Limit Challenge!”

The idea came about from my experience with trying to drive the speed limit since slapping the do no harm bumper stickers on my Honda. It really is quite a challenge on any of the roads around here, not just the major highways. Everyone is going 10 to 20 mph over the posted speed limits; some a whole lot faster!

Trying to go 55 on Rt. 22 is almost impossible when even silver haired old ladies wiz past me; or worse still, ride my bumper. Doing 45 on some of the secondary roads is pretty close to attempting suicide; just try it on Rt. 248 or 512! I often hear complaints from others about people driving too fast, but no one tries to do anything about it.

I would like to try…but I need your help.

I’m just one voice lost in the car exhaust; you guys have the soapbox, and the connections to make it happen.

My first thought was just to launch this here in the Lehigh Valley, but then I thought this is bigger than just my little corner on the Universe. Everyone, all over the country speeds, waste s gas and slams into each other. We need to ask ourselves why, and seriously try to slow down. I did, and I can tell you there’s no down side to slowing down!

It doesn’t matter if someone is driving a gas guzzler or a hybrid; by slowing down to the speed limit, not only do we save on gas, we also reduce the risk of accidents.

And, as a reformed lead foot myself, I can attest to the peace of mind that comes by not having to worry about getting a speeding ticket anymore!

Most people don’t give a thought to speeding and the unnecessary waste of gas it causes. It has become second nature to most Americans…we just do it out of habit and don’t even think about it…and old habits are hard to break.

I am asking for aid and support from the columnist for the Morning Call and the Sac Bee and asking if you will network with your peers from other papers, and other bloggers, to launch the “Do The limit Challenge” all over the country, and if possible, all at the same time. Don’t know if it is possible, but would like to try for May 1st.

I have a “cringe-analogy” for you!

The only difference between Collusion and Collision is U and I!
Maybe Chuck will persuade Governor Rendell to stop feeling the need for speed!
Posted by Bernie O'Hare at 5/01/2007 12:01:00 AM

I'm in. After next weekend.

"G** dammit--91 mph is too slow--I gotta get to that anti-white thing
and score points with Malik Zulu Shabazz--thank you Imus!!!!!!!"

Anyway, move it you lead-footed trooper. Floor it, G** damn you."

Hi Bernie;
Thanks for your support, but it looks as if the Do the Limit challenge has tanked. Your post here, and my letter to the Morning Call seem to be the only two that show up on a web search.
No even Bill White or Renee James have made mention of it as yet.
I guess I can still hope.

It would seem it is true that we are not rational creatures, we are rationalizing creatures.

We will always rationalize to justify what we want.