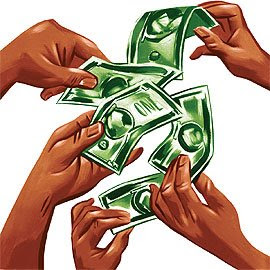 Campaign finance reports have been filed by all three candidates seeking the Democratic and Republican nominations as Easton's next mayor. Only one of them relies heavily on special interests - Democrat Mike Fleck.

Republican Gary Bertsch, who's running unopposed, has the smallest warchest. Between February 13 and April 30, he collected $3,000, and spent only $38. His biggest contribution was $2,000 from New York TV reporter Chauncey Howell, who has deep Easton roots.
Sal Panto and Mike Fleck, duking it out for the Dem nod, have raised and spent much more money in this pre-primary reporting period of about three months. Panto has raised $7,365, and has spent $3,063. Fleck has raised slightly more money, $8,424, and has spent $7,300.

Much of Panto's money comes from twenty-two small contributions between $100 and $250. Some local Easton area businessmen have given him larger sums.

Here's the kicker - Panto claims no PAC contributions or large sums from lawyers or financial consultants eager to lay their hands on city coffers! I was so surprised I called Panto. He told me flat out he doesn't want any money from people who expect to get city business, at least not in the primary. And he was more proud of those small contributions than the larger contributions from local business owners. "I want to open the doors and get everybody involved."

Fleck's report is another story. Forget all that crap about moving Easton forward, and follow the money. Unlike Panto, Fleck lists just 11 small contributors, and many of these are just different members of the Melhem family. Fleck also has no qualms about taking money from outfits who might benefit from their little investment. He lists $2,750 in PAC money, and two big contributions from outfits definitely looking for something.

Michael Setley at Concord Public Finance kicked in $1,500 for Fleck. Setley has been involved in some very questionable swaption proposals, both in Bethlehem and Northampton County. One Concord swaption deal has just made Pennsylvania's third poorest city a lot poorer. Reading taxpayers lost $230,000 in a Concord swaption in January. Setley never returned a reporter's calls about that mess, but he must have taken Fleck's call.

Fox Rothschild LLP, a Philly law firm, sweetened Fleck's pot with another $1,000. The actual names of the attorneys making these contributions should have been listed, but let's be honest. Why do you think a Philadelphia law firm and financial consultant are making contributions to an Easton candidate? Could they be looking for something? A few bond deals? A swaption?

Interestingly, Fleck also paid himself $2,400 with all these contributions for miscellaneous expenses.

Between two Dems, one candidate refuses contributions from anyone who wants to do business with the city. Another takes dough from a swaption king with a very bad track record, as well as a Philly law firm that obviously wants something in return. If I knew nothing else about Fleck, I'd have to recommend Panto on that basis alone. But with what I've learned in recent days, a vote for him translates to a vote for special interests that will drive the nails into Easton's coffin and send it floating down the Delaware river.
Update: The Morning Call has a detailed and far more objective account of the spending reports.
Posted by Bernie O'Hare at 5/04/2007 12:00:00 AM

I commend Sal for declining PAC money, but make no mistake about it: your current blog post is the first mention of the risky financial derivative - what Warren Buffet denounces as "Weapons of Mass Destruct," or WMD - that bankrupted Orange County, California.

Every politicians in the so-called Lehigh Valley jumped on the swaption bandwagon except Sal, who lacked the opportunity since he held no public offices when the swaption swindle was introduced by Lehigh Valley State Representative Pat Browne and adopted by the full legislature.

And I have no doubt Sal wouldn't have been hogswaggled by the spaption if he had been in office.

For years, you have warned us about the dangers of swaption arrangements. But we no longer have to look at Orange County. Go no farther than Reading. I have a link to what happened there in the main body of my post.

And Concord Public Finance has been at the heart of swaption arrangements in Bethlehem and Northampton County. Now we learn that, while Panto refuses special interest money, Fleck embraces money from the very swaption fanancier you condemn. Follow the money. Everything else is bullshit.

before you finish the Panto canonization process, hold your fire. don't be surprised to see special interests and lawyers on the final report.

I also saw it today's paper he received money from Pawlowski. I though he didn't do anything for ED when he worked for him. Guess Ed feels he did.

Well, I was so surprised I called Saint Sal. He tells me that, at least during the primary, he won't accept special interest money. I find that refreshing.

You're right. There was $1,000 from the Pawlowski campaign. You've heard many different statements about how Fleck handled himself. Thew most instructive of these comes from Bar Johnston, who actually managed the A-town campaign.

Fleck and I have obvious differences in approaches – but he does have good GOTV skills and I did need a Field Organizer. I can understand how he says things out loud that don’t necessarily match reality – but that is an affliction of nearly all hacks. Part of the problem with hacks is –they all have huge egos and want to tell you how good they are… even if they suck all the oxygen out of the room.

I don't know the truth.

Good for Sal. I don't fault Fleck for pulling in money. Races take money. It's not pretty, but it's fact. But I will applaud the guy who manages to do it by going to individuals first.

Bravo Sal. When I run for office, it's an approach I hope to take.

If you can avoid people who are obviously looking for government business, that's the best approach.

Flakes for Fleck has a nice ring to it!

just don't anyone profess to be shocked if they see money from the riverwalk crew and their lawyers.

Can you call or email Pawlowski, and ask him about Fleck. I would really like to know what he thinks of Fleck's performance.

Panto told me yesterday that he recieved a check from Chrin yesterday for $500. I too commended him on his bite-sized contributions from citizens.

Fleck was a good City Councilman. The amusement tax was and is a good piece of legislation. I have issues with the way Mike compromised the tax for the benefit of the State Theatre, but the tax is still a good impact adjuster.

All of the Easton candidates are aquantences or friends of mine. Fleck and Panto I would call strong aquantances. I spend a good part of the week listening to people bash them both. I've talked to them both eye to eye about character issues people have with them.

We hit Fleck up about his college degree issue on the last podcast we did last http://eastonundressed.blogspot.com/2006/04/easton-unplugged-audio-blog-podcast-9.html
I did not feel like he really answered the question though. He states that he has cleared the issue up, and he also says that he has a lawyer working the issue.

Panto and I talked about some very bad friend and family hires he had last time he was mayor. He really got bare-bones and laid out mistakes he made with his brother-in-law and the sewer plant guy (can't recall the name). I liked his answer, and I like the way he faced the question head on. He seems to know that he will be addressing past mistakes in this campaign.

I have a Panto sign in my yard.
And I am a registered republican.

I'll reserve comment on your interview until I can listen to it in its entirety. I can't dl them on my PC at home, and have to rely on a computer at a friend's office.

I don't know and have never met Pawlowski. I know a few people in his admin, but that's about it. But even if I did know him, I would not put him on the spot. Just as Archie Follweiler won't comment publicly on what happened, neither will Mayor Ed. In fact, Pawlowski's campaign gave Fleck $1,000.

I believe that, in Fleck's case, he made his character an issue four years ago. Ordinarilky, I would not be concerned about a lawsuit in magistrate's court, but I looked at it because it sheds light on that character.

I saw Fleck once after he lost the election. I was co-hosting Angle's talk show for some reason, and I really ripped into him. I also recall that he did not get irritated or upset with me and remained cordial, even after the show was over.

But I've heard enough from everyone to get a Panto sign myself. I'm a Dem who doesn't live in Easton, but I think I'll vote for Panto anyway. That's what we Dems do. You ought to try it sometime.