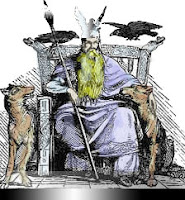 He ran out of the building and into the night, screaming and waving his arms! This was the reaction of one Nazareth News Agency customer on Friday night.

No, it was not another candidates' night. No, I was not playing my violin again. This time, the performer was local mage and mentalist Odes Odhner. If you're a magician, that's a pretty good reaction, so long as the guest has already paid.
Odner improbably claims to be a direct descendant of Norse god Odin. If he's right, I know why the Vikings left Scandinavia. But in the garish night lights at the news agency, Odhner is a mysterious presence. His long hair, triangular earrings and ominous stories, immediately set the audience on edge. You won't hear him say, "Hey Rocky, watch me pull a rabbit out of my hat!"

On April 23, a certified letter was sent to the Nazareth News Agency. Inside that envelope was a number of smaller envelopes containing predictions. The prediction that blew my mind was a prediction of Morning Call headlines for May 4. That's right, bippy. I don't know how he pulled that one off, but I'll soon be asking him for his election predictions.

Nazareth Borough Councilman Jack Herbst was asked to pick a foreign coin, and he picked an English 50 cent piece. Odhner predicted that he would make that choice in his April 23 letter!

After the show, he read tarot cards for those who dared. Recently, a little known state law was invoked to shut down Philly psychics and astrologers. City officials there must be worried about a possible loss of gambling or massage revenue. Nazareth has just begun following the Sunshine Act, so I don't think their officials will stumble upon that blue law against magicians for about another two hundred years. Odes, son of a god, played it safe and refused to charge. He also let Jack Herbst keep that 50 cent piece as a memento.

You have lost your mind O'Hare1

It was predicted that you would say this.

Good old Ross showed us! Please tell him that while he is making changes, please change the name of the site to "The World according to Ross". I checked and the URL www.theworldaccoringtoross.com is available.

Make sure that he posts lots of stuff on the Alpaca Day festivities and pictures of bunnies and flowers.

I had a strong disagreement w/ Ross today but it's not personal. I might even be completely full of shit. He told me back channel his wife and kids are being attacked and criticized publicly. That's not cool. It does take a lot of time and energy to operate and maintain a blog, and Ross is one of the best.

I agree with you. Actually, my strong disagreement with Ross is based on principles. I felt and still feel that being paid to puff a business is unethical. No one else around here does that. I will write about it eventually.

But like I said, my opinion is just that - an opinion. He has made a concession to "appease" me, as he puts it. He will note, before he even headlines such a post, that it is a paid ad.

As far as comments go, I don't like to delete comments, although I do it at times. It just leads to more of the problem that Ross was experiencing. People get upset when their words are deleted.

And I don't think it's a matter of Ross "not compromising his priciples." He just doesn't like some comments. He chastised someone over a snapple remark in my discussion with him, and that was truly bizarre to me. At the same time, he comlimented someone else who told me I was being jealous and childish. Isn't that a personal attack? It's a strange forum for me. I like things a little more wide open.

Playing comment cop is asking for trouble. For example, you decide to delete personal attacks. But what you and someone else view as a personal attack are two different things. It's too subjective. You either get thick skin or do what Ross is doing, which will limit the number of comments. That's a shame bc he does great work. I'd say he needs to lighten up with the comments, but he claims everyone likes it that way. So be it. It's his blog, not mine.

Not a week goes by that I don't get a threat of some kind. It doesn't bother me. Besides, I'm a lot more provacative.

But I think I'd be upset like Ross if it were directed at my wife and kids.

I feel bad about his situation.

You should have been at the Saturday show! Wow!