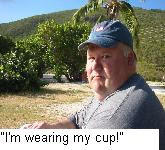 Dean Browning has popped on my blog from time to time, and has humorously suggested I call it "Not West of Route 33 Ramblings." It's actually a fair and valid criticism.

Browning is also critical of Lehigh County exec Don Cunningham, who has his eye on the Governor's mansion. That's no secret. And if Cunningham is neglecting his duties in Lehigh County, he deserves a few shots. Although I've seen no evidence of this, I'm told some Lehigh County commissioners grumble Cunningham is never in his office. Maybe he's tooling around in that car he bought with campaign dough.
Whoopee!

But Chris Casey, in a never-ending effort to alienate Republicans, has used Browning's innocuous comment to try and engage him "on an intelligent note." He then calls Browning a party hack without substantiation. He also claims Browning is a Cunningham hater, and that we don't need a commissioner who is "disruptive" or a "wrench" in government process.

In my world, we have a name for that sort of thing. It's called democracy. Surely you don't want that in the People's Republic of Lehigh County.
Update: Addicted has risen to Chris Casey's defense, claiming he knows what he's talking about. His conclusion? "Bernie O'Hare preaches integrity, but doesn't practice it " Everybody knows that!
Update #2 (5/23): Casey and Addicted must be magicians. Their entries have mysteriously disappeared. Poof!
Posted by Bernie O'Hare at 5/21/2007 02:30:00 PM

wow. do ya think browning has enough flags on his website?

I'll certainly vote for him now...

Um, I'm sorry but am I think only one who wants my County Executive out in the community, you know, interacting with community groups, business leaders, residents and voters? Or is that a foreign concept. Maybe Jane Ervin was in their offices too much?

Having worked in a state reps office, I can tell you that the guy was never there from 10 AM until 4 PM (unless he had a meeting planned).

If Dean Browning wants to turn this race into a commentary on Don Cunningham, he will lose... badly. Don Cunningham has a following that runs deep amongst GOP funders. Just ask 70% Jane about the strength of his base.

Alright Osama bin laden O'Hare, all I was pointing out was that Mr. Browning needed to show some substance. "Don Cunningham is Bad" isn't much of a campaign slogan, is it? There's constructive criticism, and then there's the vindictive mess I am always being accused of in my own territory. When I believe in someone, I stand up for them. You stand up for Ron Angle and Charlie Dent, and I stand up for Don Cunningham. It doesn't make either of us wrong. At least we believe in something, or someone.

No, Chris, you've been a naughty boy. I'm sentencing you to an evening of remedial blogging Thursday evening w/ LVDem.

Now that you've gotten your Rambler west of Rt. 33 don't think I'm ignoring you. My wife and I just got back from the vets where we had to put one of our dogs down. TJ (no, he was not named after Rooney although there is a resemblance) was with us for 13 1/2 years so I'm not really in the mood for replying tonight. I'm not sure when or where I ever said "Don Cunningham is Bad" but that is not the basis for my campaign. I'll post something shortly with some specifics as to why I'm running for County Commissioner. Until then that is a great picture of Chris - is he wearing the cup on his face?

I'm sorry to hear about the dog. That can be tough.

Having put down the best friend I ever had for 17 years, I am sympathetic to you Dean. Lets call it a night.

What a bunch of frickin' weenies!

I think Chris Casey has a steel cup, all the crap he takes in Upper McMansion. As for you Bernie, how come you keep blowing your hot air about Cunningham's car?
He didn't stick the taxpayer's with it, and you surely would have made a big crap about that. I don't know your party registration, but if you are not a Republican, you should be. You act like one.

I believe this is the second time I've mentioned the car Cunningham bought w/ campaign funds. It's a first for the LV. No pol has ever done thatr locally. I point that out because if Cunningham is traipsing all over the state, that might make him unavailable in the county. But I don't know that's so. It's just a point.

And yes, if taxpayers' money was used to buy his car, I would be making a stink. So would the DA. But apparently, not you. "My party, right or wrong, eh?"

I'm an R? Now let's see. I wrote an honest post about Dent and Bennett. When Chris Casey decided to slam Browning with facts he never bothered to substantiate, I pointed it out. When he falsely claimed to be speaking for a consensus of the blogosphere, I called him on it.

I should have realized it's perfectly ok to smear someone w/ unsubstantiated facts and false statements, so long as that person is a Republican. What could I be thinking?

I love how Casey deletes all posts from the True Dems blog site which don't agree with him. It really makes him lose credibility in my book. Anyone who can't listen to others criticisms or critiques isn't worthy of my vote.

I've just signed off as a "team memeber" on that blog. I noticed my own post was one of the ones taken down.

Yeah, I take down all the posts that disagree with me. Right.
I asked Addicted to take down a post that called Bernie a Hypocrite after I told him he was off base. He did, he felt he should defend me, and I asked hin not to get involved. That was his choice. It's funny that when I criticize a Democrat, or praise a republican, I'm loved, but the bottom line is I write what I think, not wondering whether the "Thought Police" will like it or not. When the tone of the comments get's nasty or personal, I'll take the post off if I damn well please. You don't like it? don't read it. We can dance around semantics all you want, But I don't tell other people what to write, and as long as it's not legally threatening, I leave it alone. And I reserve the right to remove all comments with profanities.

You sure as hell didn't ask me for permission to take down my post. You previously agreed with me, and several times, that it destroys the integrity of the network to delete or make wholesale alterations to a post once it publishes. You removed several posts on your blog, and every time you did so you told me it was "by accident."

And I don't care about the party of the person you attacked. I happen to be a Dem. But I don't appreciate it when I see anyone attacked without the wrtier backing up the attack. And I really don't like being told the smear is a consensus of the blogosphere when that is simply untrue.

Now you're singing a different tune. I understand that you'll remove a post if the reaction makes you a little uncomfortable. So why blog at all? So much for your bold talk about wearing a cup. So much for the so called "voices of liberty."

Incidentally, you claim that if we don't like you taking down posts, we shouldn't read them. Would you be good enough to explain how the hell I'm supposed to read a post you delete?

Isn't it funny how Dean Browning is a critic of Don Cunningham "..neglecting his duties..", "..never being in his office.."? Hmm, where was that picture taken of Mr. Browning looking at the Lehigh County Budget? Yup, that's right, on the clock at his "real job". And, looks like you hit up your co-workers who don't even live in Lehigh County for donations..I guess a (Republican) politician digs up supporters any which way possible.