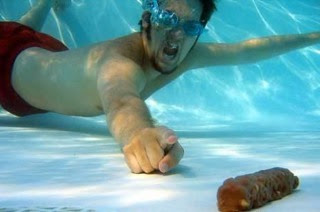 At their September 19 meeting, Bethlehem Township Commissioners voted unanimously to seek a construction manager for $2.5 million in repairs needed at the community center. "Nobody that's applying for this job should have had anything to do with what's there now," suggested resident Barry Roth. "I an guarantee that," responded Michael Hudak.

The community center, built ten years ago at a cost of $10.3 million, needs $2.5 million in repairs, according to Entech Engineering's Ryan Kennedy. The biggest problem he flagged is the metal roof over the facility's natatorium, where gutters were improperly sloped, leading to pockets of standing water that seep into the building.

In July, Commissioners authorized Kennedy to begin engineering on 15 high-priority projects that must be addressed immediately. Commissioners expect to appoint a construction manager in November, who will serve as Township advocate and "ensure the project is completed safely, professionally, on time, within budget, and to the highest standards of workmanship and craftsmanship."

Included among these repairs is an ultraviolet water-treatment system to reduce chloramines in the air at the indoor pool. Chloramines are a by-product of the chlorine used in pools, and causes an odor noticed in nearly all indoor pools. In addition to removing this odor, Township Manager Melissa Shafer reported that ultraviolet reduces the need for chlorine, which saves money.

In other business, Commissioners unanimously voted to minor modifications for the new McDonald's at Bethlehem Plaza, as well as entrance into the Bethlehem Plaza. They also agreed to give St. Luke's an extension until November for landscaping and other streetscape improvements along Freemansburg Avenue.

Nobody complained about the Bulldogs.

Nobody complained about stormwater.

Monday night football makes for quick meetings, especially when the Eagles are playing.
Posted by Bernie O'Hare at 9/20/2016 12:00:00 AM

Based on what I've read about this particular indoor pool, I really feel that it should be scrapped. Fill it in and make an auditorium that does not require such expensive maintenance. It's sad, but the taxpayers should not be on the hook for such an extravagance. They have already demonstrated incompetence at managing the original construction, and other articles have pointed out the extremely high price tag for ongoing maintenance. Stop your losses while you can, people. This is a money sucking pit.

Al Berotas is the man for the job.

Thank you Jon Hammer isn't this exactly what you were tasked with as Township Manager during the original construction?? "ensure the project is completed safely, professionally, on time, within budget, and to the highest standards of workmanship and craftsmanship." You handed over 1 million dollars to the street light folks, and wasted another 3 million of our money, enjoy your pension!

Where is Bethlehem Plaza?

You probably know it as K-Mart Plaza, although K-Martand Sears are gone.

Aside from the Giant/Home Depot shopping center, that area of the rt 22 & 191 is a dump! Shame on current and former administration for not improving it!

@10:44,
The shopping center real estate is on the market. There's nothing that the Township can do to demand tenants for the vacant commercial properties, that's up to the owners. I guess they don't mind losing thousands of $$ every month the anchor sits vacant.
There was a proposal at one time, for a gas station/convenience store near 191 & Christian Spring, but there would have been too many traffic problems.

Twp most certainly can help by working with state and county officials in improving infrastructure in that immediate area. Abandoned gas station, litter everywhere and roadways in deplorable conditions! It's been a disgrace for how many years?

The place is a zoo.

Bernie,
Is this the same way things have been dine in the triboro for many years to achieve the cistern like consistency similar to whatever that guy in the pool is screaming about!? The last couple sentences in your article says it all, local people have given up talking to bobbles heads?

3:39 pm
More fitting with the situation is a church biZar!

I thought Paul W was going to be doing this for free. Right Mr H