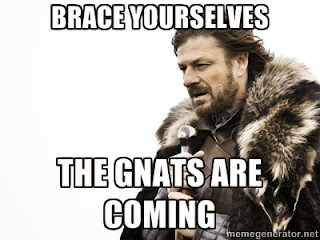 On Monday, in what I've dubbed the Black Fly Bowl, the biting gnats at Becahi's practice fields flew off with the Golden Hawk mascot. Yesterday, they reportedly grabbed a few linemen, who were a bit slower than the backs in getting away. As many of my readers told me, they've been bad just about everywhere.

The state DEP, which operates the Pennsylvania Black Fly Suppression Program, has answered that question. They started spraying about a month later and ended about a month sooner than is usual, apparently as a result of budget constraints. Here's an excerpt of an email I received yesterday from one of their specialists.

"The operational season for 2014 began in mid-May and all control efforts throughout the Commonwealth concluded the first week of August. In prior years, the Program would conduct control operations from mid to late April into late August or early September. The combination of starting the Program later than normal, high stream flows throughout the season due to abnormal rainfall and the early termination of control efforts due to exhaustion of funds resulted in noticeably higher levels of gnats in 2014 compared to prior seasons. The Program utilized available funding as efficiently as possible to offer some relief from gnats to all participating counties Statewide."

So they're here, whether we like it or not. How do we deal with them? The DEP advises,

"Unfortunately, there are very few if any good ways to repel them. Deet does not seem to greatly affect them like it does mosquitoes. I’ve heard of people using dryer sheets and Avon Skin So Soft, but I’ve had an equal amount of people tell me they don’t work. The two items that seem to work best are punk sticks and cigars. Smoke seems to be an irritant they do not like."
Posted by Bernie O'Hare at 10/01/2014 12:00:00 AM

rub a chrlorie tablet along the brim of your hat

Gnats and other species will be needed to help rid Ebola survivors of the millions of corpses left from the government sponsored outbreak.

Eat some Syrian food and let off a good long fart. It will repel the flies as well as Mezzacappa.

Let's cut waste, yo! Get off the Internet and do some work, yo! Stop stealing time, yo!

I agree that the gnats do not seem to be bothered by sprays containing deet that are applied to the body (like "Off"). It only works if you actually spray the cloud of gnats with it directly, that keeps them away for a few minutes until another cloud of them finds you.

They are absolute menace down around Lehigh's Goodman campus! Only days that offer any semblance of relief are those that are windy or rainy. First frost and they're history, hang in there people. As far as the use of tobacco products to drive them off? I'd rather tolerate the bugs.