Blogger's Note: Thanks to numbers cruncher Steve Thode for his latest report on Covid-19. I wish he had better news. 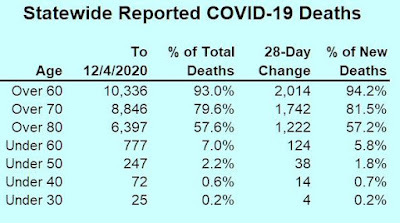 997 deaths over the past 28 days were among long-term care facility (LTCF) residents. That's slightly less than 47% of total new deaths. The last four weeks was the first time more elderly not living in LTCFs have died than elderly who are in LTCFs. Nonetheless, COVID-19 has killed more than one in twelve LTCF residents."

So, COVID is continuing to strike down the elderly at an even higher rate, and an increasing percentage of elderly not in LTFCs."

Sadly we're in for a very bleak winter.

The Thankgiving surge will be upon us shortly, as the people who cavalierly felt time together as a family on one random Thursday in November was completely worth the risk of either contracting or potentially spreading a potential death sentence to a loved one.

It won't happen to you - until it does.

I believe the thanksgiving surge has happened. There was a spike in new cases in 12/2, just six days after Thanksgiving, setting a new one-day record. Then, on 12/4, that was topped with 404 new cases.

More like the Thanksgiving detonation. All of those gatherings created 10's of thousands of new carriers who in turn will knowingly and unknowingly spread and spray the virus everywhere they go.

We can't shut everything down, but at the same time by keeping everything open, it creates this sense that everything is still normal.

good save money on SS!!

That was kids ending their college semesters and coming home just before Thanksgiving, not the Thanksgiving holiday itself.