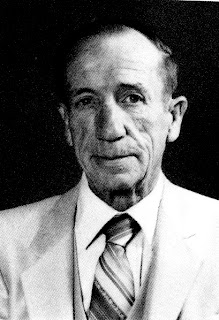 This is the latest installment from my dad's short-lived diary, penned shortly after his release from a German POW camp. In these entries, my eighty pound and half-starved father worries about his brother, Art, who was then serving in the South Pacific.

Uncle Art was wounded shortly after my father's posts, but not seriously. He was shot in the ass. When I once questioned him about it many years later, he snarled, "I was in front of the front lines, going for extra ammunition."

That's about all he ever shared. He kept no diary. He drank a lot, too.

All of my equipment, loot, real and personal property was once again in moving order waiting to be donned on my aching back as soon as the order to move was given. I waited and waited, a practice at which I have become very adept, for hour upon hour but no such order came. As we were lined up for midday chow ten G.I. trucks pulled up as only G.I. trucks can and I thought that this day would at last see me back to our own lines. However, due to the absence of certain documents or some such reason we are again detained by the Russians. I'm becoming a firm believer in the Vonnegut statement that "getting out of Germany is like walking in sand." The rumor now seems to be that we will pull out tomorrow when the trucks return with the proper papers. More of Hq. Co. showed up today in the persons of Sgt. Shuve and Pfc Sabbatino. Both look OK except for the loss of weight common to all POW's. Neither could give me any info regarding the whereabouts of Sgt. Boyle, Heinbeck, or Edgeworth. I'd certainly enjoy seeing those boys again.

The war in the Pacific seems to be progressing favorably, although we are meeting stiff resistance on some of the islands. I have an uncomfortable feeling that I'll learn more of that phase of our international troubles through first-hand experience. I'd like to see that part of the world but it would be just my luck to accomplish the feat through the medium of being a POW of the Japs, and twice in a lifetime is too much. The Russian band serenaded us again tonight. I'm getting to really like Russian music. The Russians are very much like Americans in their outlook on life. I suppose that is what queers the English with them. A few of us went across the hall to where we had discovered a radio in the room of one of our comrades. We listened for a while and left being driven out by static and by the system the joker in charge was using to operate the darn thing. He's one of that particular species of mankind who thinks he's operating the blue network whenever he comes across a radio with more than two dials on it. We are now preparing for bed at the end of a rather uneventful day.

Lo and behold I am still in Riesa. No trucks appeared today or had been rumored. However, we did receive a visit from two chaplains - one Protestant and one Catholic. They both held services and I heard mass and received communion for the first time in five months. The chaplain who was from the 69th division claimed that we would be out of here in three or four days. He seemed pretty confident that we would be back in the states within a few weeks after we hit our own lines. My inbred scepticism [sic] prohibits me from placing too much stock in his optimistic statement. Time and time alone will tell. The chaplains also brought some V-mail along with them. I wrote to my parents and to Aunt Mae. The letters are supposed to be on their way, having been brought back to our own lines with the chaplain who left here seven o'clock this evening.

A very routine day. I slept through reveille and all the morning, arising only for breakfast. Most of the afternoon was spent by all of us chewing the rag in the room where we were assembled. I thought of home today. Nothing now seems more welcome than news of the family. I am worried especially about Art. I certainly hope he has been as lucky as I in regard to ducking bullets and artillery.

It is early evening now and all of us are in the room now writing, reading, playing cards and talking. Things will no doubt continue along the same line until bed time.
Blogger's Note: First published 12/17/07.
Posted by Bernie O'Hare at 12/23/2020 12:00:00 AM

These stories are great Bernie..Thanks..

I've enjoyed this each year. Thank you.

If you use the privilege of anonymity to make a personal attack, you are a coward. That's not too hard to understand.

Enjoy these stories every year Bernie, thank you! They remind me of my grandfathers. Both WW2 vets, one Army one a Marine.

Thanks for sharing Bernie. My uncle was a prisoner of the Japs - was in the Bataan death march. He never spoke about his experience.

Always enjoy these posts of your father's diary, Bernie.

They had a good story on tee-vee today, in which it was told that a soldier and 145 men under him were captured. A German demanded that all the Jews in the unit step forward. The man said "we're all Jews". The German said "that's impossible," pointed his gun at the soldier's head and threatened he would shoot. Then he stormed angrily off, having failed in his onjective. The story was never told by the soldier. It came out through one of the men in the unit just recently. It's amazing what these people went through, and how strong they were.

That's an incredible story! Thanks.

Thanks for these posts. I would like to share with your readers the hardships many French people endured under the occupation. No coffee, no sugar, no soap, very little white flour(therefore bread a staple was in short supply). Food in general was in short supply as most of the harvest was exported to Germany. Any kind of cigarette was difficult to get. Now this doesn't seem like a big deal but back then everyone smoked. If you were active in politics or a trade union before the war, you were at minimum, warned and watch, often interned, and/or disappeared. That happened to the husband and son of my wife's great aunt. They were taken away because they were communist trade union leaders.
Only recently have the French come to terms with their role in the extermination of European Jews. Every time we go back we see new plaques marking the sad events that occurred there so long ago now. One could always see places marked "Place De Fusille", this is in short Place of the firing squad. Many towns had one of these. That's how the occupiers took care of any locals that seemed to be a problem.

Bernie, what is the "loot" your father mentions?

Food and cigarettes. My father eschewed taking personal trophies. He certainly had none.

Bernie,
It is a great man that cares about a siblings life in some other part of a war more than his OWN.

Always a honor to hear of stories about what makes this great nation the greatest nation on earth.

It is interesting how he makes his experience seem so mundane, considering what he's just gone through, like he's ready to just get on to the life he left and not reflect a lot on the horror or war. He's a skilled writer, how amazing it would have been had he written a biography. thanks again for sharing this Bernie.

I quite enjoy these post...thanks Bernie

"The Russians are very much like Americans in their outlook on life. I suppose that is what queers the English with them"

The British are all about "prim and proper" it can be a pain in the ass.

I think the British see Americans as little brothers, they stand by us, even when we act childish and are sometimes wrong.

Bernie,
Once again, thank you for these posts.
Your father was one of the remarkable generation who rose up in defense of freedom and democracy. War was, at that time, our only option to preserve the liberties that were the foundation of America. When our nation, and the world, needed them, they did not hesitate with sacrifice and courage. Your posts remind me to say extra prayers this time of year for your father and the others who made this commitment for us.
Jack