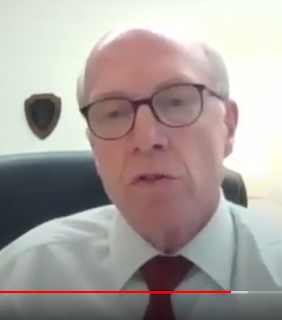 Last week, Northampton County DA Terry Houck was dragged in front of Northampton County Council on two separate evenings when they attempted unsuccessfully to defund half of his $100,000 request for Lehigh County's Regional Intelligence and Investigations Center (RIIC). If he looks a little tired, it's because he's in the middle of a murder trial. Like his predecessor John Morganelli, Houck is personally trying some of the higher profile cases. Right now, he's in the middle of a capital case against Jacob Holmes, who has been charged in the execution-style murder of Miguel Apointe at Easton Cafe on March 30, 2009. Houck believes this is the first capital case being tried in the Commonwealth since Covid reared its ugly head. Curious about how the courts are handling jury trials in the middle of a pandemic, I sat in on part of the trial yesterday. As luck would have it, I caught the testimony of Franklin Barndt, who admitted to conspiring with Holmes to set up the murder.

What accommodations have been made for Covid?

First, courtroom occupancy is limited to 25. Overflow rooms have been set up in the jury lounge and court administrator's office for members of the public, who mostly consist of family members for Jacob Holmes.

Second, everything is spread out. The jury is scattered throughout the courtroom instead of being squeezed into a jury box. From time to time, Judge Koury will ask if any of them has trouble seeing or hearing what is being said.

Third, everyone entering the courtroom is provided with a clear face mask. This is presumably so that jurors can see the facial expressions on the trial's participants.

Clad in a grey and white prison jumpsuit and orange slippers, Franklin Barndt admits that he initially denied that Holmes was involved in the shooting. But after pleading guilty to conspiracy to commit criminal homicide, he fingered Holmes as the shooter. He admits to calling Holmes, providing the illegal handgun used and showing him a back door to get into the bar. He also showed Holmes how to convert a T-Shirt into a Ninja mask. He acknowledges that, after the shooting, he tossed the gun into the Delaware River at Wy-Hit-Tuk Park in Williams Tp.

It was a revenge shooting. Miguel Aponte was believed to have been involved in the shooting of Holmes at another bar in 2006, and this was payback.

Houck went through a video that seemed to corroborate the basic details of Barndt's testimony.

On cross, Brian Monahan had no trouble getting Barndt to admit that he had changed his story on multiple occasions between 2009 and 2013 and that he himself had an extensive criminal record.

Barndt denied he had made any deals with anyone and is serving a maximum sentence of 16-42 years for his role in the shooting. He said that even if the DA sent a letter to the parole board seeking clemency, he would still be incarcerated until at least 2029. Barndt at one time had threatened DA Tatum Wilson, and pleaded guilty to terroristic threats.

Houck provided the names of several witnesses who will testify tomorrow and Friday. Apparently, every criminal in the Lehigh Valley worked at one time or another for a tree cutting service (I won't mention the name). Barndt testified that he had removed a tree at Judge Koury's mother's house, and Holmes added a few unsolicited details himself. A deputy sheriff told me that he pulled into his ex-wife's home one day, and numerous of the criminals his office was looking for were at her home, cutting down yet another tree.

I have attended a few murder trials, and I have to say it is hard to predict the outcome. I have called some correctly, but gotten others wrong. Enjoyed this update on how court is being conducted.

Years ago ,a person by the name of Megual Aponte shot a man in the old Bethlehem former. Glass Bar about 1981 with a shotgun during a robbery at the bar . He was out on private bail and on the run. Unbelievable story about this character and how he was found in Jacksonville Fla.

Is that some sort of cryptic messaging about all the Valley's criminals having worked for a tree service cutting down trees? WTF are you trying to say there? It's totally out of context with your story and makes no sense.

L.V.H. should be ashamed of herself

Interesting Bernie. I hadn't received a jury summons in over 20 years, but back in October I received one to report in for last Wednesday. I half dreaded it, but was half curious too.

When I called Tuesday night, I expected that I wouldn't be needed so was a bit shocked when they said I needed to report, then even more shocked when they told me my reporting time was in the afternoon. Usually from my previous experience its report first thing in the AM, then sit in the room all day til they needed you.

On Wednesday I reported in, waited in the jury office for a bit, then as the room started filling up, they took about 25 of us down the hall and into an empty court room and spread us out in designated seats around the room. We waited there a little over an hour, then 2 clerks came in, distributed debit cards for our service and told us we could go home, but were being retained for jury duty because of a "Big Case". They assigned us all jury #'s and took our contact information and said they would let us know on Friday if we'd be needed the following week.

Initially I was told on Friday that I had to report on Tuesday morning, but around 3PM Monday got a call saying I no longer needed to report. I give the clerks there a ton of credit for a well run, organized system, especially now.

"Is that some sort of cryptic messaging about all the Valley's criminals having worked for a tree service cutting down trees? WTF are you trying to say there? It's totally out of context with your story and makes no sense."

It was weird but this tree cutting service came up in testimony a few times. It appears that it did work for numerous of the people in the courtroom, and employs many area criminals. A deputy sheriff did tell me that several people on their warrant list were working there when he rolled into his ex wife's driveway.

That ex wife is testifying today, and I suspect the tree service might come up again.

7:57, Looks like you just missed being selected for this murder trial.

When she told us it was a "Big Case" part of me thought it was just a line of BS to make us feel good about having to be there. I really was curious to see if they'd put the entire jury in the box for a trial...

I did also see people wearing the clear masks you mentioned and had to do a double take at first - weird how odd it now seems to see the bottom of a strangers face in a public space.

@6:25 - Outdoor manual labor does not attract the best and brightest job candidates.

@12:27 - What an elitist thing to say! What do you know about being the "best and brightest"? Outdoor manual labor is hard work for little pay, often with no medical coverage or paid time off. The only thing you can assume of laborers is that they're willing to sacrifice their literal blood, sweat and tears to feed their families.

Also, I fail to see how disparaging a business by insinuating it has some sort of "criminal element" to it is fair (or relevant). I'm assuming Barndt testified to having done work at the Judge's mother's house to avoid the appearance of any impropriety or conflict of interest. I'm also assuming that this would be obvious to anyone who was present in the courtroom or provided with context.

Yes, Barndt so testified. Based on what he, Holmes and a Deputy was telling me, this woodcutting company did employ a large number of criminals. It's no insinuation, and actually is relevant to the case because today's testimony involved someone who was dealing with that business. To your point, I have now listened to the testimony of a few of these guys. They are mostly bright and well-spoken.

Aponta is probably the son of the guy that was a fugitive in my earlier statement. You might check that out . I m not involved anymore, but if it was father that shot some guy , then the son might think about it too.

How can I listen to the testimony? I would like to know if I patronize this business, as I always welcome workers into my home to use the bathroom or grab a cup of coffee.

Who is letting strangers in their home in this day and age??

Good guy Jacob Holmes they have the wrong guy