Say NO to Prima Donnas on NorCo Council 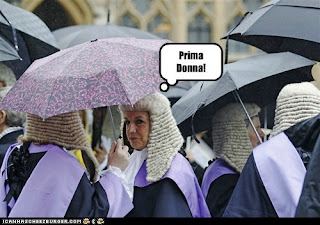 This coming year, there will be plenty of municipal races on the menu, including county races. This post is about the county races for legislative body. In Northampton County, they are called County Council. But they apparently hate being called mere Council members. This Spring, they are asking you to change their name to Commissioner like Lehigh County in a county-wide referendum.
It sounds oh-so-much-more-important.
In the height of a pandemic in which people here are actually dying, it's hard to believe NorCo Council members could be so vain. That's exactly what it is.
The driving force behind this measure, of course, is Lori Vargo-Heffner. She's the same prima donna who objected to meeting minutes that failed to hyphenate her dual surnames. She's the same criminologist who wanted to jeopardize your personal safety by reducing the District Attorney's request for funding of the Regional Intelligence and Investigations Center. She also demeans a Council member she dislikes as "the thin one."
Frankly, with all the tragedy that has struck this county over the past year, I am appalled they would waste public money on a referendum to glorify their titles. It is a slap across your face.
Not only should you vote No, but you should vote against every at-large Council member seeking re-election unless they withdraw their support. They need to know that they are your servants, not your overlords. The people up for re-election include Vargo-Heffner, Bill McGee and Tara Zrinski.*
They will have opponents who are just fine with being called Council members.
______________________
* Peg Ferraro is not running so she escapes my wrath. I am unsure whether Ron Heckman is running.
Posted by Bernie O'Hare at 12/09/2020 12:00:00 AM

I agree with you on this one Bernie. This is a different form of government than the Commissioner form of Government. If they don't like being called Councilman or Councilwoman than move to a County that wants County Commissioners. I will not vote for anyone who supported the name change.

perhaps we could just refer to them as "my lord bishop"? give them big fucking hats...

Sorry Bernie, but I would not make or withhold my vote based on such a petty matter. We each have our own votes, and I will cast mine on other issues.

If it's a petty matter, it has no place on a ballot. Elected officials who place petty matters on the ballot should be rejected, especially when that petty matter just appeals to their narcissism. We've had enough of that.

So did McClure put you up to this one or was it Dertinger or one of the other cronies that feed you your stories? Council, commissioner, dogcatcher. Really? In the end it is where it belongs, in the hands of the people. Unless you do not think the voters are smart enough to decide. You are a hypocrite and driven by emotion as has been claimed by many. Get a life.

Totally agree with you on this one Bernie!! Still steaming over the RIIC issue. If the average person only knew how very important the information contained in RIIC is for crime investigation, they would be absolutely enraged that anyone was looking to take money away from it.

They are County Commissioners, the belong to the CCAP we are insured by CCAP they go to CCAP meetings and that is their title

"They are County Commissioners, the belong to the CCAP we are insured by CCAP they go to CCAP meetings and that is their title"

They are county council members and have borne that title since 1978. They want to be known as commissioners so that when they go to those CCAP meetings, they can pretend to have the same authority as county commissioners in other counties that do not have home rule and in which commissioners actually do have executive authority. It is all vanity and ego.

"So did McClure put you up to this one or was it Dertinger or one of the other cronies that feed you your stories? Council, commissioner, dogcatcher."

I have always opposed renaming council members to commissioners. It has been tried before by other councils and I spoke out against it then. At the time, John Stoffa was Exec.

McClure thought the commissioner title switch was legit according to your own blog when he was on council. But that was before you began your love affair with his current administration.

Yes, he did, and I said at the time and now that it is utter vanity. This rebuts your assertion that I was put up to writing this post by anyone in his admin. So now you have to try to spin things another way. Keep spinning.

I think we should call them whatever one calls those who hide during a pandemic. Northampton County Cowards, perhaps. It should be discussed on a hilariously sloppy Zoom meeting where these techtards can't find the microphone.

Bingo! That's what Lori wanted to know before the money was spent. The public and their representatives on Council have a right to know how this thing works, what it does and what the costs are. After the events earlier this year, people want justification (not de-funding) for spending on law enforcement as well as transparency and accountability.

Really not a big deal what they are called. The big deal is the actual charter. It needs to be reviewed. The county is neither a township or a city. You don't need a Mayor of the county. Time for a review. That is the real issue.

"Bingo! That's what Lori wanted to know before the money was spent. "

Incorrect. I know for a fact that Vargo-Heffner met with Houck in his office, and he explained it to her thoroughly. I also know Council has received several presentations over the year, including DA Jim Martin himself. I know I have written numerous stories, as have the dailies. She wanted to defund the DA and nearly succeeded.

We do not need prima donnas.

I agree with 4:33, overhaul that charter and make it more modern. Bernie 2021