Warning to Lehigh County: Don't Listen to Your Judges 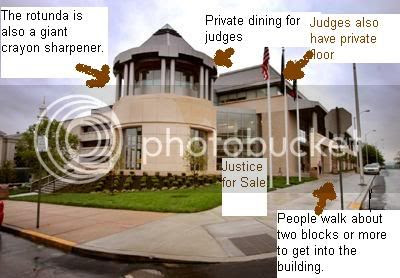 Lehigh County Exec Don Cunningham is in a tug of war over a proposed Lehigh County Government expansion. President Judge Platt, Lehigh County Commissioners, and DA Jim Martin want a brand new addition, which will cost at least $80.6 million, and give them opulent accomodations. In fact, in Platt's 2005 annual report, he told the assembled masses that the court had already begun the architectural phase of a plan to double the courthouse's size.

But here's one small problem - Bill Platt is not the county exec. True, Platt does get to wear a black dress and people genuflect as he walks by, but he's still not county exec. That distinction belongs to Cunningham, and he wants a scaled down version that could save taxpayers $23 million.
In most counties, judges run everything. Lehigh County is no different from most, and Platt has already threatened court orders mandating the expansion. Even that's not unusual. In Monroe County, former President Judge Marsh used to issue court orders setting the thermostat. So by resisting judges, Cunningham is doing the right thing. He's trying to save the taxpayers some money and establish that he, not the judges, is county exec. He need look no farther than Northampton County to discover what happens when judges are given free reign over the public purse.

In 2001, Northampton County finally adopted a bond ordinance that authorized construction of a $42 million courthouse expansion. Its first effort failed. I was part of a group that successfully challenged the initial bond because council never bothered to obtain "realistic cost estimates" required by law. The state DCED ruled that Council was nothing more than a "bystander." On its second bite at the apple, county council conducted several hearings, and even hired stenographers to take down every word. But these transcribed hearings revealed that, once again, there were no realisitic cost estimates for the courthouse expansion.

Judges were still conducting a "needs study," whatever that is, for the new courthouse. A registered architect flatly told council twice (3/8/01 & 5/21/01) that he wouldn't have the realistic cost estimates required by law until after this was done. Makes sense. You don't know what something costs until you know what you need.

Though they had no cost estimates, both Court Administrator James N. Onembo and President Judge Robert Freedberg insisted the project be funded and promised repeatedly there would be no cost overruns. I can still hear Freedberg's words, which were transcribed: "Give us $42 million and we'll come in at that or under." County Council gave Freedberg what he wanted. My second DCED challenge was rejected because the county actually filled out an affidavit with realistic cost estimates the architect himself said could not be provided.

When the debt service on this bond required the county to raise taxes 70% in two years and eliminate over 100 county positions, the judges did not stir from their teak coffins. But when it became apparent the prison was going to cost more than the $22.7 million allotted, and some council members merely suggested that perhaps the court could forego some of the more luxurious items, like the marble floors or wind sensitive fountains, the judges paraded before council en masse. President Judge Freedberg was furious that anyone would dare suggest a dime be trimmed. "I didn't expect to have to be here," he imperiously asserted. Council quickly backed down. Freedberg didn't even have to wear his black dress.

But as it happens, the architect was right. And guess what? The project is now at least $3 million over budget. The county could make up the deficit by using $2 million left over from a Bethlehem road project, but a majority of council is inclined to let Bethlehem use this money for yet another road for reasons that defy logic. As a result, Stoffa may actually have to tap into Gracedale (its senior citizen home) for the dough to complete what President Judge Freedberg called a "commitment to justice." Those of us who don't wear black dresses call it a monument to judicial arrogance.

This judicial arrogance is clear from the way judges have ignored the funding crisis they created. But if there's any doubt in your mind, it will be erased when I tell you about the role of our court administrator, the design of this monstrosity, and the finished product. I'll tell you about our court administrator next time.
Posted by Bernie O'Hare at 8/14/2006 12:02:00 AM

It's a beacon of judicial arrogance!!

The rotunda - lighthouse, crayon dharpener, or beacon of judicial arrogance - is where I'd like to see the county's liberty bell. I think Stoffa agrees but get this - the rotunda leaks every time it rains.

Those black-robed prima donnas can throw all the tantrums they want. Cunningham has a mandate, has the smarts, and has already made them look greedy. Game, set, match.

Anon, Cunningham has already been forced to back away from his original proposal. Judges can use "security concerns" to get what they want. They can also pack the prison, and regularly do that sort of thing to get their way. Beware the appealing allure of the dark side.

You were on the scene and reported the spectacle to Northampton County Councilman Ron Angle that morning on his Sunny WGPA-1100 AM radio call-in talk show.

Your report of that monring's ludicrous scene weant out over the airway to the radio audience.

Here was the word picture of a grown man, physically, but arrested mentally in his childhood, pretending he was moving around more dirt in the Afican-American and Hispanic Dutchtown-Gallows Hill neighborhood that he regards as his personal playground.

The tragedy is that reliving his childhood fantasies, digging up every bit of dirt except his own and that of his corrupt court, is leveling Dutchtown-Gallows Hill to the point of extinction as a viable ethnic neighborhood.

Gratifying his infantitle fantasies has the tragic effect of continuing the destruction of downtown Easton, the county's seat, that began with the "urban renewal" of the late 1960s and early 1970s that destroyed the Lebanese neighborhood.

Their property has been so encroached on by Northampton County Courthouse and prison expansions - and the Domestic Relations building - they understandably want to negotiate the best price they can get before the county condemns their property and offers them only peanuts.

The county needs these properties in a desperte effort to come up with the number of off-street parking needed to satisfy City of Easton zoning ordinances.

The county never had sufficient off-street parking, even with the large St. Bernard's Parish parking lot at the corner of Lehigh and S. 5th streets and Rosewood court that the county leased from the Allentown Catholic Diocese.

Easton's interim Interregnum Mayor Michael McFadden and his zoning officer and planning and development director - and the Easton Zoning Hearing Board under the chairmanship of Jame Edinger who is also chair of the Easton Democratic Party Committee - gave the county the pass.

These officials all certified the county as having the required off-street parking when in fact the county never did.

The whole county Government Center expansion, including the 2001 $111 million bond finncing it, and the General Purpose Authority that issued the bond and its subsequent swaption refinncings, is a colossal fraud - the likes of which has not been seen since the infamous Walking Purchase of 1737, when William Penn's son Thomas stole 315 acres in what is now Forks Township from the Delaware and Lenni Lenape native-Americans.

Billy, Just wait 'til tomorrow, when I tell you about the lucrative field of Northampton County Court Administration.

To Anon, The frequency with which you say that makes me think you must be one of Billy's rejected suitors. That's ok. He rejected me, too.

The streets of Easton are littered with the hearts Billy broke.