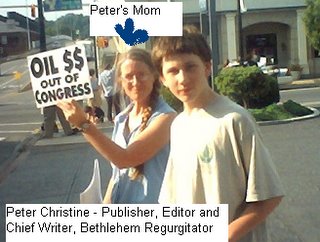 Joe Owens, look out! That goes for you, too, Bill White! There's a new weekly paper in town, and it's called The Bethlehem Regurgitator. It's publisher, editor and chief news writer? Fifteen year old Peter Christine. He writes about environmental, peace-related, and social justice issues. In addition to the online edition, print copies are distributed at LEPOCO, Bethlehem Area Public Library, and local businesses like South Bethlehem's Wildflower Cafe.

I like Peter's informal and personal writing style, which I've noticed in his print essays. But he's also informative. He walks around with some type of leather band wrapped around his wrist, in which he inserts pens, rubberbands and paperclips. That way he's always ready for a story. A recent article, for example, tells us about Green Fuels, a South Bethlehem alternative fuels company working to convert municipal waste to fuel with the added attraction of being cheaper than the usual trash haulers.

I don't know about you, but when I was fifteen, I sure wasn't reading or writing about alternative energy. I did read Playboy, and my parents were right. I'm nearly blind. And at that age, I'm pretty sure I was either in military school or the convent. I'm told Bill White was an underwear model, and Joe Owens was playing street football with Vince Papale in Philly.

Peter is welcome to post here anytime he wants. That way I can blame my few controversial posts on him. Like those posts about Judge Moran, Court Administrator Onembo, Northampton County Council, LEPOCO, Nazareth Borough Council, Upper Macungie Township, Lamont McClure, Mayfair, and Santa Claus. Santa Claus? God, Peter must be a miserable bastard. And he looks so innocent.
Posted by Bernie O'Hare at 8/30/2006 12:02:00 AM

My blog gets more readers than the Regurg will ever get...dont encourage such insanity.

Dr. Rick, I admire any 15 year old with a conscience and who is actually thinking, whether he's on the left or right. I'm sure you do, too.

I do agree that expressing opinions is a mild form of masochism. We tend to get hammered. But I'm into that sort of thing. Catholic school.

Dr. Rick, I just checked your profile and you're only 25. So is LVDem. You're all babies, and you all write so well. I have to compliment all of you for caring. It's a nice thing to see in young people and a good sign for the USA.

Thank You very much though! I have been told...

One day it just clicked.

Don't be so modest Rick.

I remember being an idealistic youth of 15. I just never did anything about it. I wish him well in this and all of his future endevors.

Next time I wont be so modest...I have to learn to accept well deserved praise better.

To Gort & Dr. Rick, I first met Peter at a LVBO meeting, which tend to be very dry. I saw him at a LVPC hearing concerning the LV's road surface transportation plan, the only 15 year old in a room full of old farts. I participated with him at an oil independence rally, where I took that pic of Peter with his pretty mom.

I don't remember much from my younger days. In fact, I don't remember what I had for dinner. But I admire young people who care about their community. It's quite unusual. And I think Joe Owens and Bill White will be flattered by this aspiring journalist.

I wish more young people had aspirations to do something with their lives.

Can I hire him to write about the happenings in Lower Saucon? I do, but no one believes me.

I have to admit that I did vote for Mr. McClure once, but it is not helping me get my bridge saved. In fact, I left a message for him at his work over a week ago and he has not returned my phone call or had an assistant do it.

I faxed him a letter asking him to consider a resoltuion to get the bridge saved by allowing time for a study to be completed on the possibility of getting this strucutre on the national historic register meanwhile taking this bridge off the list of bridges to be replaced in 2010. I didn't get an acknowlegment that he got my letter or that he'll consider it. I know I tend to be impatient, but I don't know how long to wait.

I am still waiting for the Morning Call to get back to me. They said they were interested in doing a story on the bridge, but no phone call yet.

I hope this fellow has fun, but Regurgitator?

To Anon, Well, it's better than the Bethlehem Puke. That might send the wrong message.

To LSTresidentPIA: I believe McClure did contact you once, if I understand you correctly. I suspect he's looking into the resolution and will contact you again. But as tough as I've been on McClure, I think you need to give him a little more time. Same for the MC or ET. We all tend to think our matters are the most important, but other matters can have priority. I think your idea about preserving the bridge is very laudable, and most people have indicated support for it. But you have to let them work at their own pace unless something becaomes urgent.

My family waited over thirty years to have our flooding problems corrected by the construction of a development. Yet they were not fixed and no we have to go to court.
Also I have fought with Lower Saucon Township for over a 1 1/2 years from problmes with the construction that never get resolved. How mcuh more patient do I have to be?

I understand your point but,the theworld has changed. Getting a phone returned or an e-mail answered is difficult. Al I want is to be acknowledged. I don't necessarily need an answer. I have tried to explin this to the township,that I do need to know that my problem is being looked into and an estimate on how long it might take to get an answer. Is that so wrong? I also want followup. Like what they are going to do about my problem.

I did learn that Ed Boscola is no longer the county's public works administrator. Mr.Stoffa has a new appointment who will be taking over, so I hope that helps. The problem though is still Tom Kohler. He is adamently against saving this bridge.

I understand the frustration, which we all experience. And I agree that people should have the courtesy to respond to phone calls and emails.

A 15 year old is aware of the environment and other issues. I think that's wonderful.

Greetings from Vegas
The 15 year olds Mom is teaching her kid to publish pamphlets. I'm teaching mine to hunt, kill, and eat their own food. I admire her and her offspring, but come the armeggeddon, her kid will be begging my kid for food.
Okay, maybe this conference/swap meet/trade show of surveillance goodies is getting to my head, but
the "Regurgitator?"
I'm going to the floor of the trade show to see if they have any Blogger detection devices. I'm already looking for a Stepford Wife detector, even though the easiest thing to do is check the voter rolls and see if they are a Republican!

DemFly, I don't want to know what you're doing looking at surveillance devices.