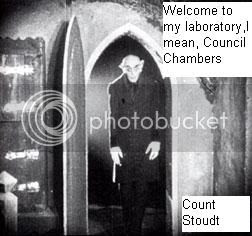 Not long ago, I told you Nazareth's Borough Council must be vampires because they like to meet in the dark. And that's exactly what they did last week. Although a power failure had killed lights everywhere in town, these guys met anyway. Whew! And Councilman Davis told everyone, "we can't have big open meetings all the time."

Council met again last night. And although power had been restored, they're still operating in the dark. Get this. Nazareth's concerned citizens actually hired an architect to prepare a preliminary construction estimate and plans for the renovation of the current government center, which would make relocation to Nazareth Hall Park unnecessary. And at $874,000, it's a lot cheaper. Pretty impressive stuff. Council was also told over 1,000 residents have already signed a petition opposing relocation of the government center to Nazareth Hall Park. Considering that Nazareth's total population is only 6,023, and is divided among 2,560 households, this figure must represent a large portion of Nazareth's adult population.

But Council appeared unmoved. Davis condescended to tell us his committee had already considered ten different options, had already spent "hundreds of hours" on the Nazareth hall Park proposal, and wandered aloud whether we want new options "to fall from the sky. " And Count Stoudt angrily asserted at another point that it's up to the committee to consider these options. This is the committee that has been meeting secretly in some crypt, away from prying eyes. Remember Count Stoudt? He's the fellow who adjourned a police committee hearing before letting a reporter in on the action. He'd rather conduct his meeting by Mama Bell. He also told a reporter a few weeks ago nothing would get done if they had to inform the public every time a couple of them get together. Where's Van Helsing when we need him?

A council committee that considers a possible municipal center relocation and that actually hires an architect for that purpose, is clearly bound by the Sunshine Act. But not according to Nazareth Solicitor Al "Renfield" Pierce, who demonstrated his disdain both for the Sunshine Act and the public last night by his behavior during courtesy of the floor. At one point, he nearly fell asleep. Then he went to work on his eyeglasses, trying to fix a loose screw or something. While doing this, he got into an argument with himself, banged his knee against a desk and hurt himself, and then rested one or both hands against his chin or forehead. At no time did he look anyone in the eye. But he did spend a lot of time looking at one or two flies that were in council chambers for some reason. He finally paid attention after courtesy of the floor was over.

On July 18, I warned Council it is operating under the mistaken impression that the Sunshine Act has no application to its committees. I asked them to agree by August 9 that future committee meetings would be conducted in compliance with the Sunshine Act. After tonight's performance, it's pretty clear future council meeting will continue to be "tales from the crypt." I really don't want to sue but am concerned this will continue unless something is done.

By the way, there were a lot of interesting speakers last night. But I think I was the most dazzling of all. I kept my mouth shut. Not one of my strong points usually. But I've only lived here about fifteen years so I'm still pretty much regarded as an illegal alien.

Now if you'll excuse me, there's a strange mist coming under my door.

Afternoon Update:
Fellow blogger Ross Nonnemacher at NewsOverCoffee has a blow-by-blow decscription of last night's meeting. The Express Times and Morning Call also contain terrific accounts. But I'm disturbed that the Borough Engineer waited until after the meeting was over, and then started taking shots at another professional to The Morning Call when the citizens' engineer could not defend himself. If Borough Engineer Keller had problems, why not express them during the public meeeting when the subject could be addressed? Did he really have problems or was he slinging mud? This is yet another indication that our borough officials do not understand the Sunshine Act. And by attacking the plan after the meeting was over and no one was left to defend it, Borough Engineer Keller demeaned both himself and his profession.
Posted by Bernie O'Hare at 8/08/2006 12:52:00 AM

Bernie, I have a necklace of Garlic Cloves you can wear, and I think if you stuff towels soaked in holy water under the door, you will be safe.

I think council just doesn't get it.

Some of the intellegent people who spoke at the meeting on Monday night should consider running in the next ellection. I hope they don't forget.

What does 1000 signatures represent on a petition in Nazareth???
Some interesting stats....There are approximately 4500 residents in the borough of 18 years of age. That would be 22% of the adult population has put there "pen where their mouth is". That may not seem like alot. But lets look at what the average election brings out.

The the last 5 years 10-18% have come out for primary elections.

25-42% have come out for General Elections

Viewing these, it seems that so far we are doing better than average voting stats. Does the voice of the people count in Nazareth?? It may not to council, but it will on the next election day!!!!

Lori, I was trying to get these stats when I typed the post but couldn't find them. So I appreciate your comment. Regardless whether these are all regisdtered voters, they reflect a significant percentage of the adult population.

To Chris, Too late for me!

To Anon, I as impressed by the quality of speakers I heard. But people should try to limit themselves to one bite at the apple.

Nazareth is bad on Sunshine Law compliance insofar as committees are concerned. This continues with the meeting room. It seems to make no difference there are people standing outside. But they are pretty good at letting people speak. And it's very unusual for a municipal body to let people speak more than once or to question council members.

Sounds to me like Vincent Price should be president of borough council, and Peter Lorre his toady solicitor. Maybe Lon Chaney could play, "The Creature that ate Nazareth Park", because I don't think Godzilla is available. But,with the ever spreading water run off/Sinkhole problem, perhaps "Swamp Thing" could be convinced to abduct a couple of borough councilmen

Madbatter, Always great suggestions from you! But I think I'll be doing something else today to address the problem.

I think the mad batter should sponsor a "jeopardy" for Nazareth, and you Bernie, could be Alex Trebek. and just which contestant will be the winner? Definitely not the taxpayers. Though it might be difficult to get all the players into the "Catacombs" of Nazareth hall. Hey, maybe Essroc will let you borrow one of theirs?!!!

Chris, If I heard correctly at last night's meeting, Essroc actually did offer one of its buildings along Main Street to Nazareth!