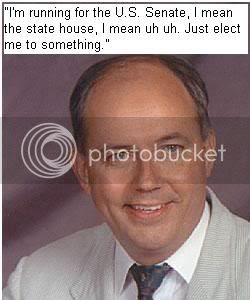 Now that the primaries are over and the deadline for filing as an independent or third party candidate has passed, it's safe to assume that we've seen all the candidates we can expect to see. Right?

A conservative Republican has announced a write-in campaign for the state house seat currently held by popular Bob Freeman. When asked why he didn't run in the primary or get on the ballot as an independent, he incredulously claims he only recently became aware of Freeman's positions.

His name is Ron Shegda, and he's maintained a website since 2004 named "Ron Shegda for Public Office." I sent him an email back in June, asking him what exactly what "public office" he had in mind, but never got a reply. So whatever public office he's seeking, don't count on constituent service to be one of his strong suits.

Now we know he has his eyes set on the Freeman's very safe 136th District, which stretches south from Easton to Hellertown.

But Politics: Lehigh Valley Style tells us Shegda also has his eyes set on the U.S. Senate in 2010. This is what Shegda himself has to say:

"We would like campaign offices in all 67 Pennsylvania Counties. We are especially interested in Senior Citizen Coordinators. We need your wisdom. We especially need Youth Coordinators. Without your idealism and energy there is no hope. Our campaign needs at least $10 million in today's money. Julio and Paula Perez have initiated our peace chest (Yes! --- no war chest!!) with their first mustard seed contribution. Yet we are wise as serpents and gentle as doves. We will use the power of a Senate seat to defend our nation. Observe the Great Seal of the United States on the back of every dollar bill. The eagle clutches both arrows and olive branch; but it gazes at the olive branch. Will you join this campaign? Please send your contribution to: Ron Shegda for U. S. Senate 2010 P. O. Box 736 Emmaus PA 18049-0736 USA"

I don't know about you, but people who use the Royal We tend to scare the hell out of me. Reibman used to do that. Judges do that.

I think he should run for pope.

On September 8, long after this post first appeared and Shegda began his litany of complaints, he today insists that he actually did respond to my initial email asking his intentions. He includes an email indicating an intent to run for the 136th state house seat in 2008, not now.

I have no record of receiving this email, and it disturbs me that Shegda would wait until now to claim he actually had responded. A few days ago, he called a radio show while I was on the air and began a rambling bashing of "imbeciles." So much for his Christian message of love and peace. Gee, if he had responded to my email, why didn't he say anything then?
Posted by Bernie O'Hare at 8/18/2006 12:05:00 AM

I don't know Glenn Reibman (though of course I know who he is), and this guy looks like a total nutjob.

BUT - a lot of the time, when a politician uses "we" as in "we believe" or "we've knocked on x doors" - believe it or not, it's humility; sharing credit with staff/volunteers/etc. So don't get scared of every pol who does it.

Just ones who also are running against Bob Freeman and running for U.S. Senate at the same time, and are less educated about Freeman's policy positions than the average voter. Now THAT's terrifying.

Point well made. I think you're right. A pol just might associate himself with his staff. I stand corrected.

What I can tell this charecter is looking for A: Arlen Spectors seat. and B: The Devil's PAC itself.......... CLUB FOR GROWTH. And all of us in these here'em parts remeber the former Congressman / Carpetbagging Pimp from New England.... the one and only PAT "I MAKE AMERICA THINK THE WHOLE VALLEY IS BACKWARDS" Toomey.


These swine have taken mudslinging to a new level. The only way deal with these hatchet stooges is to expose them for the diabolical slime that has destroyed Americas will, government, and political system.

Who could forget all the (mostly out of PA money) that Toomey got from people trying to Karl Rove the Senior Senator?

And after this election it will be clear the Club for Growth (and I'm not sure what they are trying to grow, Immigration? No they hate them. The Economy? Only if you happen to be part of the top 2 percent. Civil Liberties? Nope they hate search warrents and pesky rights. Hate? Yes! A Nazi state? Jury is still out, but Toomey did call Spector a far left liberal!)

I suspect Mr Elect-Me, will dance the slow dance with the devil, I mean pat toomey for some evil LIE LIE LIE DESTROY HATE cash.

We'll see, but I will look for a vegas casino to give me odds on this bet!

Maybe I'm too much the cynic. But I did read a ton of Dr. Hunter S. Thompsons books on Politics so I fel I'm being rather tame on the truth of the matter.

here is a GREAT link to his site. Remeber that private life monsters in Cable News and the GOP used to propell their names to the Religous Far Right?

Terri Shivao. Remeber the autopsy said she was brain dead for years and had no means of function or recovery?

Well hear what this nut job is posting on his site about a item State Reps probaly won't be voting on.
(CLUB FOR GROTH, I SEE IT!)

Spike, You're right on the money and that's why I think this guy should be running for pope. Unless his IQ is around 3, he can't seriously expect to have an impact against Freeman. So why's he doing it? Why did he also announce he's running for US Senate? Why did he also announce he's seeking public office, without any office in mind? Since he seems to be on very good terms with God, I think his Freeman run is just a platform to launch his campaign for pope. Then he can bring back the Spanish Inquisition. Nobody expects the Spanish Inquisition!!

He also strangly looks like Mr. Kruger who George Costanza worked for on Seinfeld after the Yankees.

Geez! Just like Christmas coming earlier and earlier each year, starting a campaign for office is following that same trend. But, 2010? Give me a break. About the only thing worthwhile donating to this fool is the one time post you've given him on this blog.
Then again, every blog needs a comic section, and an occasional post about him just might be the ticket.
dg

What a total WHACK-job!! This loser is one delusional imbecile.

I hesitated posting anything. But many dangerous leaders have come out of the woodwork, so I thought I should point this guy out immdiately.

He will at least provide some comic relief.

Does that mean we need to "get this Mother F@*%ing Candidate off thie Mother F@%*ing race!"????

Oh Bernie, you're sounding so very cynical today! That's soooo unlike you. Of course this gadfly is a serious candidate: for a padded room.

Keep up the good work.

No, "I Am Tired of these MOTHEF#CKIN Idiots and the MOTHERF#CKIN ELECTION!"

What's with the snakes today?

Pa Progressive, What's sad is that this fellow never bothered to get on the ballot by primary or through a nominating petition, and now Freeman will have to waste his time dealing with him.

Chris, A friend of mine talked to me about that just yesterday. He said there is some movie ad on TV or something. I don't know bc I don't watch cable TV, believe it or not. That single move frees up a lot of time to do crazy things like reading.

Snakes on a Plane is a bad B type film that comes out today staring Samuel L Jackson.

The King of the Mother F bomb in movies.

And very funny for easy one liners on snakes aka Club For Growthers!

Freeman isn't worrying about this guy. He'll get around 50 write in votes. He picks emotional an uneducated positions to get people riled up but his problem is that the people who get riled up also like Freeman.

LVDem, Thanks for your blog post on the subject. I don't think Freeman's worried, but I am because of what this guy might try to do after he loses. He might run for county council and then I'd have a heart attack!

I used to work with this guy. After he was fired and his political b.s. emails kept infiltrating the office server, this is what my co-worker came up with: http://i64.photobucket.com/albums/h186/meandevilwoman/Shegda.jpg

Where was he working?

I work in a business in which Mr. Ron Shegda visits frequently and wouldn't elect him to the Mickey Mouse club. He should be ashamed of himself for the manner in which he conducts himself during day to day public interactions. He is arrogant and demeaning to others (clearly believing they are beneath him) and will attempt to bully people to get his own way. Just look at his pictures and you can see the crazy in his eyes. Here is the funniest part...after he acts like an idiot he leaves his political garbage (exactly where is goes immediatly) all over the store. What is he thinking? That he just won votes? Ha! I think not!