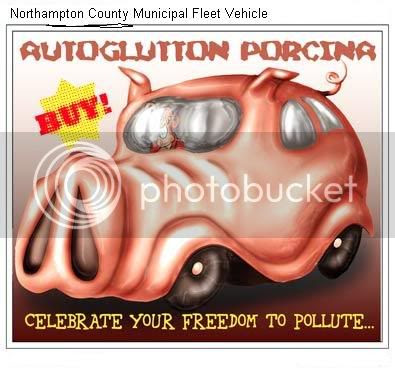 While the Lehigh Valley works on the state's first regional hazard mitigation plan, other Northampton County officials recently sought bids for a wish list of gas guzzlers that include Ford Expeditions, Explorers, Rangers and Crown Victorias. What the hell are these folks smoking? Thankfully, Council didn't like the high cost. But something else keeps slipping everyone's minds.

We're running out of gas, bippy!
The U.S. Mayors Climate Protection, signed recently by the Mayors of Allentown, Bethlehem and Easton, calls for increasing the fuel efficiency of municipal fleet vehicles and decreasing their number. The state is adding hybrids to its vehicle fleet each year, and has even launched an alternative fuel pilot program. Yet some county officials want gas hogs. Why not just get it over with and buy everyone a Hummer?

In addition to wasting what little fossil fuels remain, these flashy SUVs spew hydrocarbons that are heating this planet enough to sink both New York city and Florida.

There goes the World Trade Center - again! I suppose we could blame somebody, maybe those damn illegal immigrants. Our true enemy? Look in the mirror.

"I'm Jeremiah, and I'm not talking about God being mad at us. I'm talking about us killing the planet as a life-support system with gasoline. What's going to happen is, very soon, we're going to run out of petroleum, and everything depends on petroleum. And there go the school buses. There go the fire engines. The food trucks will come to a halt. This is the end of the world. We've become far too dependent on hydrocarbons, and it's going to suddenly dry up. You talk about the gluttonous Roaring Twenties. That was nothing. We're crazy, going crazy, about petroleum. It's a drug like crack cocaine. Of course, the lunatic fringe of Christianity is welcoming the end of the world as the rapture. So I'm Jeremiah. It's going to have to stop. I'm sorry."
Posted by Bernie O'Hare at 8/25/2006 12:05:00 AM

Both new vehicles are gas sucking Doge Caravans. One Passanger (Glass windows all around) and one "Cargo" few windows.

So much for going greener from Easton, land of the disapointed back to you...

voted to approve that is

Spike, Although the Dodge Caravan was at one time one of the greenest minivans, there are now 11 vehicles that are both better for the environment and more fuel efficient. Only 2 of these 11 vehicles, however, are American.

Check out http://www.fueleconomy.gov/
You can compare vehicles side by side on fuel economy, harmful emissions and other statistics. The Dodge Caravan does not appear to be a "gas sucking" vehicle. If fact, the Caravan is better than a SUV in both fuel economy and green house gas emissions. At least the city of Easton didn't buy a Ford Expedition or a Chevy Suburban.

Barney, Thanks for your comments. The Caravan definitely beats the Expedition and Explorer.

BUT, saying it is better than a SUV is like saying John Wilkes Booth was more civilized than Jeffrey Dahmer cause he didn't eat lincoln.

SUV's are the worst, but Minivans on a whole are unefficiant over worked 6 cylinders.

I know about Fuel efficiant. I drive a 2001 Toyota Echo, which was the most efficiant Gas only motor on the market when Toyota stupidly decided to end the echo and use the chasis and motor on the 400 lbs heavier Yaris model.

70% of Toyotas are made in the USA, unlike Dodge (A German Company), Ford, and GM(The original traitors to go south of the boarder for low wages).

Sad that more Toyotas and BMW's are made here in the US THAN THE QUOTE "AMERICAN CARS"!

First of all Spike, you have to consider what the City of Easton is using the vehicle for. If they need to haul a large amount of supplies, etc, an Echo will not work, so it doesn’t matter if the Echo gets 100 miles per gallon.

Sorry, I forgot to include this in my post.

FOR VEHICLES IN THIS CARLINE:U.S./CANADIAN PARTS CONTENT: 80%
NOTE: PARTS CONTENT DOES NOT INCLUDE FINAL ASSEMBLY, DISTRIBUTION, OR OTHER NON-PARTS COSTS.FOR THIS VEHICLE: FINAL ASSEMBLY POINT:FENTON, MISSOURI, U.S.A.COUNTRY OF ORIGIN: ENGINE: US TRANSMISSION: US

City MPG 19
Highway MPG 26
Actual Mileage will vary with options, driving conditions, driving habits andvehicle's condition. Results reported to EPA indicate that the majority of vehicles with these estimates will achieve between 16 and 22mpg in the city, and between 22 and 30mpg on the highway

Well, where do the profits go for the "American Brands" they downsize workforces in America and benefits like retirement, health care, and well wages!

The Japanese are winning because they are better at running a business in American than the "qoute" Americans.

And I didn't say they should buy echos. My point was that the Japanese did a better job at building a quality product. Trust me a Rav 4 could do what the caravans are for, yes better milage.

But it was thrown into council last second so no one could research the matter well.

American Men may be making a profit from "American Sales" (Keep in moind a Brit from Jaguar now runs ford, Dodge has Dr. Z, and GM bui8lds more cars south of the boarder than any other company)

But when the American Heads keep it to them selves and betrtay the American workforce by "Cutting and running" to maximize profits while destroying the Ameican middle class, well I will spend my money with Toyota.

And thats why toyota is becoming number one in the world. GM can make a product worth a you know what. GM is JUST recently getting into the "Sport Compact market" that the imports made big almost 15 years ago.

Its the American heads fault the state of the auto industry is sooo lacking. They cared more about their own mansions than the success of a Company's workforce.

I got a couple extra mid to late '80's turbo 4 cylinder cars sitting around that I ams sure me father would love for me to make them a deal on... But the only problem is that they run best on 93 octane.

Spike, Barnie, LStresident, On my way back from an old bridge in Lower Saucon Tp tonight, I saw the Ford hybrid SUV, with all those cool stickers, etc. Since the county has pretty much decided to buy vehicles from the state fleet, and the state is finally getting fuel efficient, that should solve the county's problem. Perhaps that Ford hybrid will be part of the county fleet soon.

But the county and other municipalities really need to take other steps that address both our limited fuel supplies and global warming.

This may sound goofy, but many places are now awarding comp time or cash bonuses to employees who use alternative transportation. It would be nice to see local businesses and government come up with such a plan. Perhaps some foplks on LVBO might even be able to help out.

Thanks for your insight, and comments.

While I have many a "senior moment" memorywise, I seem to recall back in the 80's that a candidate ran for the l5th District Congressional seat on a platform of getting cars off the road (like the Big Three and Big Oil did streetcars and trains back in the 50s) over a ten-tear period and replacing them with a mass-transit system worthy of an "advanced" civilization. I think his slogan was "Berg For Congress, The Lesser Evil." He was panned by The Morning Call Girl and despite a groundswell of public opinion lost the election.

While I will not actively seek the nomination this time, I will accept an honest draft. Preferably an Iron City.

Bernie, If I were still drinking, I'd ply you with Iron City, switch your registration to R, and dump you off at Santorum's office.

You were ahead of your time in the 80s.

Not to beat a dead horse (or elephant), but I did change my registration to R for the final run against Ritter, only to find out that the rules had changed. Apparently the Democratic Oligarchy actually thought I was a threat to get elected and lo! Harrisburg began requiring 1000 signatures instead of the 200 that I could get by myself in one day. Getting 1000 signatures in Republican high rent areas took more walking than I was willing to do. The Lesser Evil.