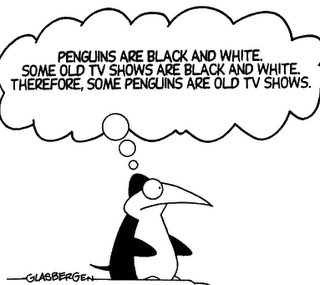 I think I saw him at the Nazareth pool one day late this summer. When he looked at me, he started laughing, so I'm pretty sure the dude in the Spandex was none other than Nazareth Mayor Earl Keller. I do look like Bigfoot in my bathing suit, so I didn't really mind his chuckles. I'm used to it. The Mayor was at the pool with some young kids, and he seemed to really enjoy his young charges. Hiz Honor seems like a nice guy. But as nice as this guy may be, his command of logic is questionable.

I first realized this when Mayor Keller blamed three tire "slashing" incidents on Nazareth residents who oppose the borough's plan to expand its municipal center to a park. The first of these incidents occurred long before the proposed expansion was publicly known. The second matter didn't even occur in Nazareth, and the victimized official blamed neighborhood kids who had been causing him some trouble. The final act of vandalism was directed at the Mayor's car, which had been safely parked inside a garage. Yet the Mayor, who actually was police chief in Nazareth, put two and two together and came up with five.

Now he's at it again. Yesterday, a downtown bank was robbed. That's big news in a place like Nazareth. But the Mayor actually used this potentially deadly situation to argue against keeping the police station downtown. "So much for downtown police presence being an anchor for the downtown." Huh? If you take Keller's argument to its logical extreme, Nazareth should not have a police department at all since crime is going to happen anyway. And don't you think it's just a bit tacky to use a bank robbery as an excuse to argue for a municipal expansion in a park?

Yo this guy is a joke, no not you Bernie, the mayor. His logic is poor at best. It's time we came together to get several of these bone heads out of office. Can't we just ask them to leave, we will tell them they can still be paid and all. Just please leave, your not doing Nazareth any good. Earl, Davis, Larry, "Same as" oh I me Samus, please bow out gracefully. You guys are a disgrace to the town. Earl, your so worried about the safety of the 6 people that work in the station, there not even there? You told us they are on the road 95% of the time. Are you not worried about the other 6000 people in your town that you are going to financialy hurt. How about the 86 year old grandmother living on 900.00 a month income? What's up with that, are you going to pay her heat bill when you raise the taxes to pay for your little office. Enough it enough, look around and see the times. If you are truly concerned with the safety of this town, listen to the people. Do we have to publicly make you look like a fool over and over and over and over again. You and your boys look like a fool because you are close minded. You got thousands of citizens that are against what you are doing, yet you are so close minding that you cant see what's right. What's right for the people is that you don't put a loan over our heads for 25 or 30 years to pay for you little office. When I'm mayor of Nazareth, I will personally paint the windows up there at the old shack of a police station that you call home, I will paint my office, I will work with the public, I will respect the peoples wishes. You and several of your boys lost respect from the respectable people of this town. We tried to speak to you in an educated manner, spending our hard earned money on protecting ourselves from the foolish plans that you are purposing. And stop being quiet in the meetings already, we know your for the building addition, just stand up for what you want. No-one likes a wishy washy leader. You really should think about stepping down, the town gov. is looked at in a joking manner. This is because you have chosen to close your heart and mind to the people.

Sounds logical to me! Thanks for your comments.

Keller seems a decent sort of fellow, and the man I saw at the pool obviously has a kind heart.

But right after a bank robbery, I was stunned to read his comments about the municipal center relocation. In addition to being illogical, they were a tad insensitive.

It's not PC to attack those, poor misunderstood cwinimals, the bank robbers, i.e.

So the mayor tried to show he is PC.

They say if you give a man enough rope he will hang himself. Let's give the mayor some more time and he will look so silly that he will have to leave or face humiliation?