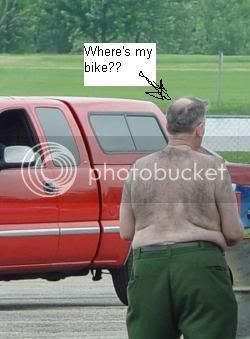 I've told you this before, but let me say it again. I'm a miserable bastard. I'm so nasty I don't even get along with myself. About ninety per cent of my colleagues at the courthouse stopped talking to me years ago, and I think my daughter has disowned me. She doesn't even call me "Dad" anymore. It's, "How are you, father?"

Even animals hate me. I once offered an apple to a horse, and the damn thing attacked me. Another time, during a long run through the country, a frickin' herd of cows took off after me. Man, are they fast! Somebody told me that prey animals fear me because I'm pretty hairy and they think I'm a wolfman or something. I think there's something to that because dogs are the only animals who like me. But they're pretty stupid. They chase their tails, drink water out of a toilet bowl, eat crap, and lick me.

Now, thanks to Bloggernaut, I've found a way to fool people into thinking I'm quite the guy. It's the popularity dialer! You plug your cell phone into a website called the popularity dialer, set a date and time, and your phone will ring while you're in a crowd so you can pretend to have conversations with people who just adore you. Or, if you have to be somewhere you don't want to be, you can plug in a call from your "boss" telling you that you need to get back to the office at once.

I got onto the popularity dialer. Instead of plugging in my cell, I typed the cellphone numbers of what few friends I have left, and started sending away. One of my pals was at home, and his wife got to hear some babe begging him to go out. Another of my friends got all five preset messages in the span of about ten minutes, and was going beserk. I did this to about seven hundred people.

For some reason, the popularity dialer has had the reverse effect for me. Now, pretty near one hundred percent of the people I know have stopped talking to me. Even the dogs are growling at me.

But I'm sure that's temporary, and we'll all be laughing about it on Monday.

I keep warning people that cell phones are dangerous.

Mr. O'Hare has been taken away for an evaluation by mental health authorities to determine whether he is harmful to himself or others. After his 48 hour review hearing, we may let him out. But he will be heavily sedated, and his response to your comment may be incoherent.

Does this therapy involve the removal of unwanted body hair through electrolysis? Over his ENTIRE body? OUCH!

DemFly, That's not a bad idea. I'll teach that bastard to make fun of my cousin.

Lamont McClueless would probably buy a ticket to watch that!

I'd get your husband, too, but he likes that sort of thing.

You are scaring me, I better come check on Bernie. There's no bondage involved is there?

No, but I hear Sexy Sylvia is giving him the sponge bath.

I'll release O'Hare in exchange for Sexy Sylvia and a pump.

You have an outstanding good and well structured site. I enjoyed browsing through it »