Is the Northampton County Liberty Bell Being Sacrificed at the Altar of Political Ambition? 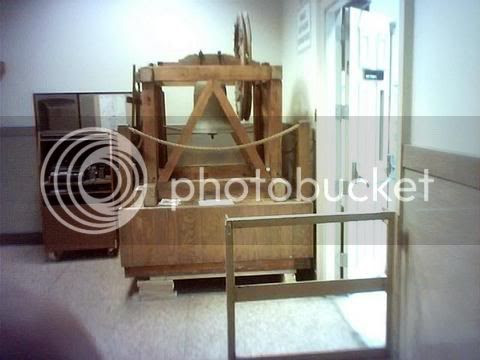 This morning, I told you that Northampton Couny administrators have been moving at a glacial pace at finding a new home for the Northampton County Liberty Bell. Well, now my bell just rang. Director of Court Services Mary T. Ensslin called to announce that finally, the Historical Artifact Display Task Force was actually going to have a meeting. When? Thursday, a few hours before the County Council meets and is presented with a Resolution asking administrators to do something about the Northampton County Liberty Bell and Declaration of Independence. Hmmm.

I don't want to be unfair, but it's pretty clear to me the only reason Ensslin has finally scheduled a meeting is to diminish political fallout from her total disregard for our history. I don't know why she needs a "task force" to decide our Declaration of Independence should not be lying on its side in a hallway. It's obviously a sham meeting by a sham task force that had to wait until Court Administrator Onembo got back from Australia so that it can recommend whatever the judges want. Rumor has it judges might not like an old bell interfering with the motif of the new courthouse, where the rotunda looks like a giant crayon sharpener.

For years, there has been a judicial stranglehold on the executive branch in Northampton County. To his credit, Exec John Stoffa has been trying to establish that he makes the administrative decisions - not the judges. But subordinates like Ensslin, who are looking to their future, are trying to ingratiate themselves with politically powerful judges. It's sad to see a national treasure like the Northampton County Liberty Bell ignored. It's even sadder to think this might be the case simply so someone can curry favor with the courts in her quest to become the next county executive.

When Ensslin last ran for County Council, her winning theme was "Working day to day, helping taxpayers cut through government bureaucracy." How are you doing that, Mary? First one committee. Then two committees. Then a task force. A lot of energy has been spent to set up meetings. But none spent to deal with the problem.

The Northampton County Liberty Bell is housed in a wooden display case, as you can see above. Over the years, pieces of wood have been replaced as the situation warranted. But Ensslin seems to think it important to preserve the wood, and has suggested the Bell be kept in darkness. This, of course, is ridiculous. Even Philadelphia's Liberty Bell is exposed to the light, and a glass case enclosure only became necessary after some nitwit slammed it with a sledgehammer.

But to be on the safe side, I asked a distinguished chemist at PSU (who just happens to be my son) whether exposing the Northampton County Libery Bell in the rotunda of the new government center would present any problems. This is what I learned:
Hey dad, maybe this will help: Brass is a combination of copper and zinc (usually 50% or more copper and 20% or more zinc), with a few other metals added for strengthening, and as with all metals or alloys, they can oxidize (rust, or tarnish). Brass is particularly popular because it has a relatively slow oxidation rate, it will stay shiny longer than some other metals without the need of polish, but like any metal, it will need polish now and again. The ONLY way to preserve a brass bell, and keep it from tarnishing (which can easily be washed with a strong acid) is to keep it in a container free of oxygen (an inert environment, possibly under nitrogen gas). Light has absolutely nothing to do with brass tarnishing, it is oxygen that causes the problems, so unless the bell is in a crate free of oxygen, the preservation they are attempting is doing no good at all. In addition, if this specific brass alloy contains aluminum (as many do) then the aluminum reacts with the air to form a very thin protective coating (invisible) on the outside of the brass, which protects it from tarnishing.

It sounds that way to me, too. That's why I told her I will not participate in what I now consider a charade. Maybe I'm being unduly harsh, but it sure sounds to me like her sole concern is advancing herself.

You've been totally on the right side of this Bell issue. Why not take the high road and be part of the solution, too? I don't see why you need a task force either, but I'd like it a lot better knowing at least one member was an outspoken advocate of saving our bell.

Thanks for the nice words. On June 20, when I first wrote about our Bell, I was asked whether I wanted to help solve the problem or just write about it. And I agreed to be part of a committee that dealt w/ all of our historical artifacts.

But when we go from 6/20 to 8/2 with nothing being resolved and not even a single meeting, it's obvious to me that I am being played. I can't believe that administrators couldn't perform the single act of putting the Declaration of Independence in the right position instead of leeting it lie on its side in a hallway.

And it's also obvious that Ensslin was waiting for her marching orders from the court, and that the committe will recommend whatever the court wantrs. I still have no answer to my request that someone in thew sheriff's office look in on the bell to prevent it from being vandalized or stolen. I still have no answer to my question whether this task force would met publicly. I have asked these questions repeatedly, and they have been ignored repeatedly.

So I think it's time to make matters know to County Council and se what happens from there. If administrators are unwilling to move the bell into the rotunda as an appropriate show of respect for our national and county history, then perhaps they can be embarrassed into doing the right thing.

Thanks again for your nice words, but I just realized I've been had for the past 6 weeks.

Sorry for all the typos.

She has no expertise in that area. He wanted her in his administration to continue her push for a regional health department - an area in which she has experience and can continue to peddle her political influence.

That's all the "Lehigh Valley" needs, one more authority or "shadow government."

Let us taxpayers pray that Northampton County - and Lehigh County for that matter - continue to oppose Stoffa's and Mary Ensslin's Health Department Authority.

Stoffa and Ensslin are currying favor with the Dorothy Rider Pool dollars and those of the Weller Health and Wellness Center.

The latter is money that Northampton County Court of Common Pleas President Judge Robert Freedberg and the PAAG office of J. Michael Fisher salvaged from sale of non-profit Easton Hospital to the for-profit Community Health Services of Chattanooga, Tennessee.

Freeberg and Fisher, with the collusion with other county and state officials, accomplished all of this without first dissolving the Easton Hospital Authority as required by Pennsylvania's Municipality Authorities Act of 1945 as Amended.

This is true of other Northampton County authorities as well, usurped by the fraudulent General Purpose Authority and bureaucrats like John Kingsley.

By the way, is Kingsly related to Ellen S. Kingsly, Esq., Domestic Relations' hired legal gun, with offices conveniently located practically on Count Government Center grounds, on S. Union Street, in the only building remaining in the 100 block of S. Union and shared with the contractor for the Prison, Keating, of New Jersey?

The only reason I ask is that nepotism among the county's middle and upper management is rampant.

I honestly don't know whether John and Ellen Kingsley are related in any way. I know they are not married to each other. And they are in completely different offices. I'll ask John the next time I see him.

I also don't understand the misgivings about studying a regional health authority. We are under a threat of pandemic. According to the medical pros, we're actually overdue.

In that event or if some kind of natural disaster occurs, don't you think we'll be wishing we had one? We have over 60 municipalities in the Lehigh Valley? Does this mean we should have over 60 different plans for dealing with a health emergency?

The need to study a regional health department is long overdue. I am wary of a regional authority that is unelected, but we need to prepare for a possible health emergency.