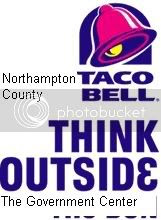 On June 20, I posted a blog about Northampton County's Liberty Bell, whose iron tongue proclaimed Independence on July 8, 1776, in Easton's circle, site of our first courthouse. In fact, that bell is all that's left of the original courthouse. Thousands once lined Easton's streets to tug at this bell as it rang for twenty-four hours to announce the end of WWII. Today, it sits at the end of a lonely hall, with no security, and was even used as prop for courthouse furniture. Another item, the county's Declaration of Independence (signed by thousands of county residents), is lying on its side in another hallway, and has been ignored for months.

After posting this blog, my own bell began to ring, but it was only my cell phone. Northampton County's Director of Court Services, Mary T. Ensslin, was on the line. Something had to be done. Her solution? A committee. And guess what? I was invited to be part of this committee. "Would you rather help solve the problem or write about it, Bernie?" Wow! Guess I was going mainstream.
But the day before Independence Day, the Bell still sat forlornly where it was, and it was still cluttered with crap. So I emailed Mary T. Ensslin. After all, I was on a committee. My bell rang again, and I was told that the problem was so serious they had decided two committees were needed. Holy cannoli! Meanwhile the Bell stayed right where it was, and our Declaration of Independence was still lying on its side behind a damaged judge's bench.

Last week, I got an email notice that my committee had been upgraded. It's now a task force. In fact, it's called the Historical Artifact Display Task Force. It still hasn't met, but that's a pretty cool name, huh? This task force includes Court Administrator James N. Onembo, the very court official whose lax attitude towards our historical artifacts led to the problem in the first place. I think he'll be a captain. I want to be a commodore or something.

Meanwhile, the Liberty Bell is no better off now than it was on June 20. County administrators pay more attention to the Taco Bell, where many go for lunch. As you may have guessed, I sent a snotty email. And I know God must be on my side on this one because once again, the Evil One has interfered. That damn Mailer-Daemon has stepped in and put my email in "quarantine." And so the battle rages.

So why am I letting this get to me? A government that takes no steps to preserve its history has no real interest in its future. And when administrators in a county government have no interest in preserving its symbols of freedom and independence, do you think they will take any steps to take care of their employees, who have gone without a raise for three years? Will they do anything to help the taxpaying public, who have been beset both by tax increases and a new government center that is nearly impossible to enter without a guide?

County Exec John Stoffa must be able to rely on his subordinates to do the right thing. But it appears that Mary T. Ensslin is more concerned with Mary T. Ensslin than with county history or employees. It makes sense. She worked for Toomey a few years, then jumped ship to work for Santorum a few years, and is currently aboard the U.S.S. Stoffa. She'll jump ship again when she announces her candidacy for county executive. That's her true quest and nothing is getting in the way - not even the Liberty Bell. And she doesn't want to make an issue about the Liberty Bell because that might embarrass judges, who made no provisions at all. She's counting on their political support. Judges can't get involved in politics? If you believe that, I have a Liberty Bell I can sell you.

WHERAS, the Northampton County Liberty Bell is the Bell that announced the signing of the Declaration of Independence on July 8, 1776, from the original courthouse at Easton's Centre Square; and

WHERAS, the Northampton County Liberty Bell, first forged in 1768, summoned the people of Easton to fight fires, rang out the opening of court sessions, and was also used to announce news; and

WHERAS, the Northampton County Liberty Bell continued to announce courthouse sessions when the courthouse moved from Easton's Centre Square to its current location in 1861; and

WHERAS, thousand of county residents lined Easton's streets at the end of WWII to tug on the Northampton County Liberty Bell, which rang out for twenty-four hours; and

WHERAS, thousands of local residents from all four corners of the county have signed the county's Declaration of Independence; and

WHEREAS, during the expansion of the Northampton County Government Center, no provisions have ben made for these historical artifacts; and

WHERAS, the Northampton County Liberty Bell has been moved to the end of a hallway where there is no security and no cameras; and

WHERAS, the Northampton County Declaration of Independence is lying on its side in another hallway.

NOW, THEREFORE, BE IT RESOLVED, By the Northampton County Council that:

1. The County Executive be requested, to move the Northampton County Liberty Bell from its current location to the rotunda of the new government center expansion.

3. The Northampton County Executive is requested to post signs around the Bell prohibiting its current use as a support for other county furniture or as a repository for waste; and

4. The Northampton County Executive is requested to take all steps necessary to remove the county's Declaration of Independence from its current location, where it is lying on its side, which is indicative of disrespect for our nations' ideals of independence and liberty.
Posted by Bernie O'Hare at 8/01/2006 12:52:00 AM

Bernie, what if we could get Taco Bell to mount the Liberty Bell symbolically above one of their restaurants? Corporations love to sponsor community based projects! What could be more symbolic in our war with illegal immigrants than to put the liberty Bell atop a Mexican Restaurant?! Let freedom ring?! Unless you are a Mexican?

At the current rate, it won't be long before the Liberty Bell walks out the door and the county will have nothing to sell to anyone.

I possess a historical artifact: the plague dedicating Spruce Way pocket park to the Dutchtown-Gallows Hill once-residential neighborhood now home to the few African-American and Hispanic residents remaining, Nature's Nook, a commercial pet shop retail outlet, and parking lot for Northampton County's new, ultra-modern,$3 million Domestic Relations building, of the architecturally intrusive style fancied by the artsy-fartsy New Urbanists of Easton set - the same ones who gave us Abraham Atiyeh's U.S. General Services Administration-leased building for occupancy by the Social Security Administration and in violation of the contractual GSA off-street parking requirents (which those of the old SSA building on Ferry Street now occupied by ProJeCt Easton more than met).

Spruce Way pocket park no longer exists, fallen before the county's advancing demolotion ball, like the Easton Catholic High School and Saint Bernard Parish's convent, all three of which once adorned Dutchtown-Gallows Hill.

Spruce Way Park was paid for by Community Development Block Grant (CDBG) funds in 1982, when blue-blooded Brahmin Philip A. Mitman of the silk-stocking College Hill neigborhood was Easton's failed mayor the first time.

His current failed mayoralty follows those of (at least in my personal experience) Sal Panto Jr., Tom Goldmith, and Michael McFadden.

In fairness to Phil, interim, Interregnum Mayor Mike and Mike's, Tom's, and Sal's zoning officer and planning and development director Robert O'Neil had already given Northampton County the zoning and building permits it needed to destroy Dutchtown-Gallows Hill.

These Easton officials sold out the residents of Dutchtown-Gallows Hill, and, indeed, of Esston and all of the county, because of the city's desperate need for revenue - and for whatever personal bribes they might have received from the county for their services.

I tried to give the plague to Mitman in Centre Square.

But he refused to take it and told me to keep it.

I wonder now if Mitman will dispatch Easton Police Officer David Ryan to arrest me for possession of stolen property (the plaque).

I wouldn't be surprised since he has followed Tom Goldsmith's precedents in so many other ways.

After all, Goldmith sent Ryan and another officer to my home to arrest me for having snipped off the locks and chains from the chain-link fences blocking public access to S. Green Street and the 100 block of Pine Street - in an act of civil disobedience and, to boot, a symbolic act of snipping off Goldmsith's balls and those of his clients Theodore Kheel and the trio's partner Peter Koehler.

At the June 6, 2002, meeting of Northampton County Council, described in the following day's edtion of The Express-Times from staff reports, "Givens told council that the citizenry would not stand for any more bond issues. County officials passed a $111 million issue last year, and they're weighing their options on two more: a $30 million bond for open space preservation and a $3 million for a Domestic Relations building.

"Givens declared on Thursday the start of 'the second insurrection in the Keystone State," the first being what was known as the Whiskey Rebellion" of 1795, when "about 7,000 men took up rms in Pennsylvania to protest the impostion of a tx on the [making] and sale of whiskey.

"'I'm declaring war on you,'" Givens said Thursday, garnering wild applause from the packed council gallery. 'We're fed up. We've had it with you.'"

Billy, when you talk about the plague, I assume you mean plaque. There is a difference. Like Phil Mitman, I wouldn't want the plague either. I'm with Phil on that one.

For those of you who don't know, Billy is involved in another fight right now - a fight for his life. I feel sorry for the cancer cells that have invaded your body, Billy. And I hope you get well soon.

Give me a break! At least I spelled "plaque" correctly (the second time I used it in my post, with a "q" and not a "g."

I also possess another artifact, a color portrait of the Pennsylvania legislative chamber in Harrisburg.

This is the $3 million dollars that Koehler and Kheel sent down the garish, yellowish-orange demolation tube that hung like the snout of some exotic primordal beast for so many months.

What K&K didn't send down the tube into dumpters for hauling away to WM/GCS, they auctioned off on the sidewalk in front of the hotel.

- whose colonial and Victorian architectural charm has been sullied by its ugly, modernist courthouse.

Since the Northampton County Government Center lies within Downtown Easton's historic district, who bribed Brent Glass, executive director of Pennsylvania's Historical and Museum Commission in Harrisburg, to approve the architectural intrusions - or had Glass already vacated that position for a higher one at the Smithsonian Institute Inside-the-Beltway that approved a Las Vegas Sands casino on the toxic CERCLA (Comprehensive Environmental Response Liability Act)Superfund site of historic Bethlehem Steel and South Bethlehem neighborhood?

I also possess an artifact, I have the piece of toast served to Bill Clinton that some say has the image of Jesus burned into it.