I remember seeing him one day, standing outside the courthouse, smoking his usual cigarette, but looking a bit more subdued than usual.

"What the hell's wrong with you?" I asked.

"I just told Judge M---- to go f#*& himself," was the reply.
That was Jim Hickey, Director of Administration under former County Exec Glenn Reibman. He rammed Reibman's $111 million spending plan down our throats, and when the county's first bond was rejected by the state, did it again. Councilman Ron Angle fought him tooth and nail, and the two of them rolled around courthouse gutters more than once.

As much as I opposed Reibman's folly, I learned to respect and eventually admire Jim Hickey. He was Reibman's hatchet man, and don't kid yourself, every county executive needs one. He was a hard-working, brilliant and aggressive lieutenant who fervently believed in the bond. He was also a straight shooter and very accessible. He thought nothing of storming into the recorder's office, beet-faced, poking a nicotine-stained finger into my chest, and telling me I'm completely full of shit.

I loved the guy!

He's the bastard who told Morning Call reporter Scott Kraus "flaming monkeys will fly out my ass" before the prison expansion went anywhere besides Easton. I kept hoping for that day, but it never happened.

He played hardball. Want an example? When Easton officials considered blocking a prison expansion next to the county campus, Hickey threatened to build it right by Centre Square. Easton quickly backed off. 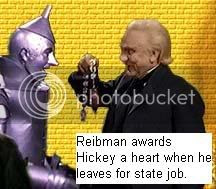 He left Northampton County in 2003, off to higher wages and a lot less stress working for the state. Reibman never filled Hickey's spot, a big mistake. It created a vacuum, and Jim Onembo quickly slithered in.

Had Hickey stayed, he would never have let the judges or Onembo go off the deep end. He would have told them to go f#%* themselves, and most likely would have kept the courthouse expansion on budget and on time.

County Exec Stoffa's selection for Director of Administration, Marta Gabriel, was rejected by his own Democrats on Council. They seem intent on preventing Stoffa from accomplishing anything. They've hurt Stoffa, but also have hurt county employees and taxpayers. He needs someone with a hatchet, a miserable bastard.

Do you know what department Jim Hickey went to in state government?

Hickey went to the Dep't of General Services, where his unusual talents are surely being wasted.

I remember posting a blog article about hoping he would run for state rep in the 133rd. at the time I didn't know he was such a hatchet man, but I liked him from the few times I had met him. But in retrospect, hatchet men don't make good candidates or representatives.

Hickey probably would not make a great pol. He's too candid. But who knows? A few do get away with it.

Northampton County needs somebody. Those judges are walking all over everybody. How can the workers take this? Don't they have a union?

Bernie, I thought you were the most miserable bastard in Northampton county!!

Chris, You're right. I am the most miserable bastard in the entire Lehigh Valley, if not the state. But Hickey has additional skills.

Bernie, you forgot to state the obvious:

IF Jim Hickey had still been here, he would not have let Reibman sleep-walk through the Primary and let Rip Van Stoffa beat him.

To Anon, You're right. Had Hickey remained, he would not have let Reibman lose. I saw that first hand when Reiobman ran for a second term and Hickey draggged him around by the nose.

Instead of Hickey, Reibman ended up with Bob Daday and went down the tubes pretty quickly. Now Daday sits on a radio show complaining that Stoffa is a terrible exec. Maybe Daday should look in a mirror and ask himself why his boss lost.

Do you have any suggestions who should filled the post? Do you know any out-of-work straight shooters? How about any non-smoking, Lebanese, out-of-work, straight shooters with balls of steel? C'mon, that is an impossible void to fill. Those kind of people come along once in a lifetime. Okay, maybe twice... ~~aj

I think Hickey could be persudaed to come back, especially if someone accused him of screwing things up the first time around. That should get him back in a flash. In fact, Angle has suggested it, but I don't know how other members of Council feel.

Angle himself would be pretty good, but he could never get confirmed and would have to give up his council seat.

Gabriel was an excellent choice for that spot. Although she has a lot more finesse than Hickey or Angle, she's perfectly capable of throwing darts when they need to be thrown.

Pete Houck, who's very happy in Warren County, is another miserable bastard who could get the job done. He was very effective under Gerry. People didn't like him, but Director of Admin is no popularity contest.

But I'd have to agree that Hickey was a rare find.

I don't know too much about K as an administrator.