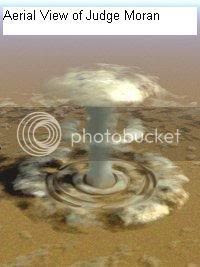 Last week, the Express Times told us Judge Moran had played the race card in sentencing a white youth to probation. It included a verbatim transcript of exactly what Moran said. But I have since been informed that the transcript Moran filed is a watered down version of his actual published remarks.

On Friday, I contacted three different offices to get my hands on this official transcript, and each office told me to check with the other. On Monday, I went to the Criminal Division, which is where these records are ultimately kept. This time, instead of being directed to another office, I was flatly told this transcript is unavailable without a court order.

Hmmm. Now let me get this straight. This is a transcript of an open judicial proceeding. Am I to understand that, although anyone could have attended the hearing, the transcript itself is unavailable? That makes no sense. Since Moran's original remarks have already been published, what public interest is possibly served by hiding the official transcript?
None! It's stonewall time, bippy! And the wagons have circled around Judge Moran. I'll send Judge Moran a written request.

Why am I making such a big deal out of this?

Let me explain with a little story. A few weeks ago, people walking into the rotunda were confronted by a large bearded man screaming at another fellow. Concerned, they told some deputies, who raced down the hallways to discover that this person was none other than Judge Moran. The person at whom his venom was directed? County exec John Stoffa. The reason for the temper tantrum? Stoffa had suggested moving the county's Liberty Bell to the rotunda. Moran exploded. He does things like that.

In fact, he explodes regularly at administration officials concerned about rising costs in the county's $43+ million courthouse expansion. They're concerned about the public while Moran's chief concern seems to be himself.

Unfortunately, Moran's volatility extends in all directions. In March, during a social meeting with a bunch of lawyers, he flipped his lid when talking about courthouse security and his own perks. He had to send a written apology. He's also had to apologize for demeaning the staff of both District Attorney and Public Defender, although this conduct has persisted. He even had to send a letter to a jury after incorrectly telling them their deliberations, which resulted in multiple burglary convictions, were possible only because he had rejected a sweetheart deal between the prosecutor and defendant. No such agreement existed.

All of this erratic behavior is bad enough. But now Judge Moran made a terribly divisive statement from the bench that undermines our judicial system. When he learns that someone wants a transcript of what he said, he alters his original remarks to soften their tone without bothering to consult the lawyers involved. And now, court officers stonewall an attempt to see the official transcript of an open judicial proceeding. There is a climate of fear among court employees who wonder when the next explosion is coming.

Is a government official exempt from criticism because he wears a black dress? Any government official who acts erratically, who offers a racially tinged statement, who tries a cover up that statement by altering his original remarks, and who stonewalls attempts to view the record of a public proceeding, is fair game. But a judge must be held to the highest standards of all public officials. Here's what an Official Note in the Code of Judicial Conduct tells us:

"Public confidence in the judiciary is eroded by irresponsible or improper conduct by judges. Judges must avoid all impropriety and appearance of impropriety. They must expect to be the subject of constant public scrutiny. They must therefore accept restrictions on their conduct that might be viewed as burdensome by the ordinary citizen and should do so freely and willingly."

Temper tantrums, confusing and unnecessary statements about race from the bench, demeaning courthouse employees, coverups, stonewalling - these all tend to diminish public confidence in our judiciary.

Maybe Bush will solve our problems and nominate Moran to the next Supreme Court vacancy.
Posted by Bernie O'Hare at 8/29/2006 05:18:00 AM

So what do you want Bernie, a few weeks of R&R in a local hospital's psych ward, or do you want him removed or to resign?

Maybe he should be forced to obtian help through the dreadful county mental health system. I can speak form personal experience that the level of assistence is barely adequate.

I'm sorry you had a negative personal experience. I think Moran's volatility and some of the other things would be fine in other professions. It's just not appropriate in a job. He calls himself a "passionate" person. That's tremendous. But there is a big difference between passion and intimidation. I believe Moran has crossed the line and hope he recognizes that himself.

We might want to reflect on the fact almost all judges are meglomaniacs; if they render an objective decision, it is a gift.

Child rapists and those who commit incest probably need to be executed.

One judge at a time.

Really, although I'm very critical of the courthouse expansion, I admire and respect most of Northampton County's judges. I might disagree with their opinion or a sentence, but that's their call.

What does disturb me is an increasingly obvious pattern of erratic behavior, both on and off the bench, by Judge Moran. He probably has a form apology letter by now. I think he really needs to learn to control his temper. If nothing is done, it will only get worse.

bernie,
this is nothing new. Moran's behavior has been the worst kept secret in the NorCo Courthouse for many years.

You're absolutely right. And it's getting worse. Thankks for your comments.

you're welcome, you miserable sack of filth...


btw, interesting blog. been hearing about it for a while, finally got around to reading it.

This is obviously someone who knows me well.

you should feel a chill

Barlatta is STICKS and STONES.

Moran is only NAMES.

It's not even close.

To Anon 4:40: Hmm. You must be Glenn Reibman. Either that or a bill collector who's going to start dunning me on my blog. The check's in the mail.