Northampton County Pampers Judges at Expense of Employees and Taxpayers 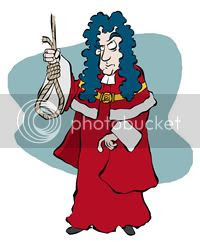 Monday, I told you there were $3 million in cost overruns for the Northampton County $42 million courthouse expansion even though our President Judge promised that would not happen. Tuesday, I introduced you to one of the fellows who made that possible, court administrator/constable/zoning officer/realtor Jim Onembo. He has personally benefited from this expansion to the tune of $59,000. Today, I'll tell you about the actual expansion, which panders to our judges at the expense of everyone else.

Before it all started, Onembo slithered the halls, clipboard in hand, assessing each office. Now despite his numerous occupations, he's not an architect or an engineer. And he knows nothing about the inner workings of row offices directly affected by the expansion. Nevertheless, he took it upon himself to design each of the new row offices. He didn't bother consulting people who actually use them, always a mistake. He did all the planning for the expansion while County Exec Reibman and aide Bob Daday sat idly on the fourth floor, slapping each other on the back and staring at walls.

The net result for both employees and the public - a total disaster.

The row offices directly affected by the renovations are Recorder of Deeds, Civil Division, Register of Wills and District Attorney. Of all these offices, things went smoothly only in the DA's office. Judges were careful not to ruffle DA John Morganelli's feathers, and gave him everything he wanted. Unfortunately, John's jurisdiction is limited to the DA's office. Employees in other row offices were not so lucky.

In the Recorder of Deeds, employees and the public spent over a year listening to the cacophony of drills and hammers as contractors pounded away. The final product, once the miasma cleared, was an unsafe and cramped work environment. Petite ladies and weaklings like me were forced to carry heavy record books from one end of a room to the other just to find space to open them and read. The recorder's office had to be completely redesigned and a group of searchers spent countless hours on their own time weeding through old mortgage books just to squeeze a little more room. Contractors were forced to return and redo much of their work. I'm sure that office went way over budget.

As bad as things were in the Recorder's office, at least no one got sick. In the Civil Division, everyone started breaking out with itchy eyes. The office is infested with, of all things, minute particles of Fiberglas. Employees must wipe down their work stations every day and take a shower as soon as they get home.

But the prize for worst transition goes to the Register of Wills office. The nicest ladies in the courthouse work there. And nice people, you may have heard, finish last. The Register of Wills was shoved into a vacated men's room, and a hall surrounding that was closed off for her staff. This hallway and its adjoining rooms were plagued by mold, leaks, and terrible smells. Now every employee in that office has allergies. One employee who could not stop breaking out in rashes has been forced to quit. Another has been diagnosed with asthmatic bronchitis, and her doctor is convinced that her workplace has caused it. In a nearby hallway, contractors with masks and plastic sheets merrily pulled out asbestos as these poor ladies made do in an unhealthy environment. Water continues to leak over precious records. Will books have actually been removed because there's simply no room. One member of the public broke out in a rash after five minutes in the office and had to leave. Did President Judge Freedberg stir from his marble sepulchers to see how these fine ladies were doing, even once? His notion of a "commitment to justice" must not include that sort of thing.

As bad as things are for courthouse employees, they're worse for the public. Much of the parking previously available was chewed up for the courthouse and prison expansions. If you're handicapped, good luck. There's a few spots in front of the rotunda, and if you don't get one of them, prepare to hoof it for several blocks, and uphill.

You see, judges were concerned that peasants like you and me would trample their marble halls, so the entrance is placed at the far end of the courthouse expansion. Jurists and court administrators have their own little entrance close to their reserved parking places. And once you get into the building and are searched, good luck finding whatever office you need to use. If you need to visit the Register of Wills, you might die of old age before you get there. The expansion is actually designed to discourage the public from visiting their own building.

Disregard for the public is also reflected in the way the county has treated its furniture. In various stairwells and hallways, chairs and tables are stacked together in no apparent order. Perfectly good furniture and equipment was tossed in dumpsters. I don't know how much actually walked out of the building because no one was really paying any attention to that until very recently. But I have a feeling some folks are having very profitable yard sales this summer.

Another public insult, at least to me, is the complete disregard for our county's history. Rather than planning to place the county's historic Liberty Bell in a prominent display at the rotunda or somewhere where it could be seen and appreciated, no provision was made at all. As a result, the Bell still sits alone in the corner of a lonely hallway, although it is no longer being used as a prop for courtroom furniture. County Exec Stoffa would like to place the Bell in the rotunda, but has to figure out why it leaks every time it rains.

The judges have a private dining room on the rotunda's second floor, furnished with a $15,000 table that had to be cut in half just to get it in the building. They have their own private entrance, which might give them security but also isolates them from the public they are supposed to serve. They even have a floor to themselves, equipped with a private potty for seven of eight judges, and a private guard who decides who is allowed on the floor.

Before this expansion, the courthouse was surrounded by slate, a local material from our very own slate belt. It was both functional and a symbol of pride in our community. But that wasn't fancy enough for the judges, so jack hammers ruined it all, and the slate was replaced by ornate marble from God knows where. The county has been forced to hire a maintenance worker whose sole job is to maintain the marble floors because the judges don't like to see scuff marks.

And as I write this piece, contractors are hard at work installing wind sensitive fountains, although a few eye wash stations would probably be a little more appropriate.

Years ago, I read a biography about John Marshall, the U.S. Supreme Court Chief Justice who established the principle of judicial review. In addition to his brilliant legal mind, Marshall was a rather easy going fellow who was often mistaken for a servant or errand boy. There was never any danger that this fellow would be isolated from the public he served. The person who lent me this book? President Judge Freedberg. He needs to read it again.
Posted by Bernie O'Hare at 8/16/2006 12:02:00 AM

Did anything ever happen with that Liberty Bell Preservation Committee, or whatever they called it, that you mentioned on here once?

Did anything ever happen with that Liberty Bell Preservation Committee, or whatever they called it, that you mentioned on here once?

Thanks for the question. That "task force" was just for show. I know that Stoffa, if he can, intends to move the Liberty Bell right into the rotunda once he can get it to stop leaking when it rains.That is what he told Council at their last meeting.

I also know this did not go over well with some judges, who actually want to get rid of the Bell.

I think you missed your calling in life. You are one hell of a investigative reporter

Chris, Thanks for the kind words, but all of my facts are false.

Soooo, are you the Valley Daily Show? (Fake News) lol

For example: Did you know? After accepting lucrative campaign contributions from the utility companies (Allegheny Power, ARIPPA PAC, Columbia Gas, Dominion, Duquense Light, FirstEnergy Corp, PPL Corp, and the like), Joe Preston wrapped a "moral responsibility" cloak around Act 201 (Responsible Utility Customer Protection Act), and rushed from committee legislation that makes it much easier for the seedist financial interest in the country to terminate the gas, electric and water service of poor, low-income customers. Throughout the entire process, there was not a single public hearing on the measure.

god Bless you Bernie, you've got more guts than I do

DEmFly, Until I can start riding my bike w/ more frequency and get into running again, I have more guts than most people.