The Lehigh Valley: A Fragmented Mess 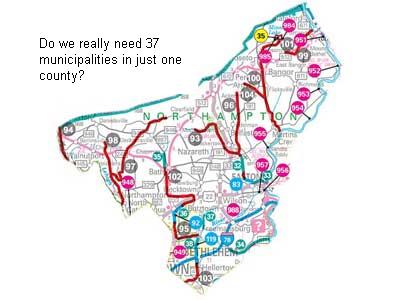 Last time I told you about Upper Macungie Township, where township supervisors are trying to explain inflatable dolls and questionable township expenses to state regulators. Bill White believes the second class township code, which allows supervisors to hire themselves, is part of the problem. I agree, but think there's another reason.

The Lehigh Valley is a fragmented mess, a challenge for any lover of jigsaw puzzles. It's a quagmire of Upper and Lower Saucons, Milfords, Macungies, Nazareths, and Mount Bethels. We've got North and South Whitehall, Allen and East Allen, Catty and North Catty, Bangor and East Bangor, and Easton and West Easton. We're a morass of 62 separate municipalities and 2 counties. On the local level, we elect 466 officials to represent 578,500 people, or 1 local and paid elected official for every 1240 residents. And this is without looking at our 17 school districts.

The Lehigh Valley is not unusual. Pennsylvania possesses "one of the nation's most labyrinthine systems of state and local government." Its 2566 municipalities is the third largest total of general governments in the nation, according to a recent Brookings Institute report.

So what's the big deal, you may ask. Isn't government supposed to be close to the people? Well, yes. But having so many of them has the opposite effect - it makes local government both weak and unresponsive. That's certainly what's going on in Upper Macungie. Let me give you some examples.

First, our fragmented governance enables developers to run roughshod over haphazard municipal land use plans and local zoning. That's why open space referenda are really just a joke. They do nothing but create little playlands for all the McMansions.

Second, because we're such a mess, the state can ignore us. Parochial concerns prevent us from agreeing on anything, whether it's the location of a baseball stadium or a casino. Municipalities compete over business locations, luring a business like Lehigh Valley Plastics from another location just a few miles away. State officials can play municipal officials against each other, which keeps them weak. We could be much more forceful if we were united.

Third, because we are so divided, unelected groups like the LVPC can set our agenda. Although much of the LVPC's work is excellent, their mandate does not come from the people, and that is reflected by their "public" hearings, which are almost always scheduled when those of us who work are unable to attend. Elected municipal officials are hesitant to question LVPC recommendations because their municipalities are unable to fund studies that might reach different results.

The final and most serious problem is a fragmented response to pandemics, natural disasters, or our coming energy crisis. Most of the Valley's major businesses already have plans in place. Our local governments, however, are simply not equipped to deal with these problems, and instead pretend the problem is not there.

Our two County execs, John Stoffa and Don Cunningham, recognize the importance of a regional approach to the Lehigh Valley's problems, and have begun exploring areas where government services can be consolidated. So far, they're mostly discussions, and no one has even broached the idea of consolidating a few municipalities or merging Northampton and Lehigh Counties.

One example of the difficulties faced, both by Stoffa and Cunningham, is in the idea of a regional health authority. Northampton County Council recently authorized the study of a regional health authority, which makes perfect sense in the face of a pandemic or natural disaster. Those won't stop at municipal boundaries. Yet Councilmen Lamont McClure, Charles Dertinger, and Wayne Grube voted against this salutary proposal, defying common sense with parochialism.

Regional problems require regional solutions. And perhaps it's time to consider one Lehigh Valley County, but that won't happen in my lifetime.
Posted by Bernie O'Hare at 6/15/2006 01:16:00 AM

This is an excellent post. I would not rule out this happening in our lifetimes. Rational explanations like this can change hearts and minds faster than you think.

I would like to note the the company you mention, Lehigh Valley Plastics, was lured out of Allentown to Havover Township (NC) with public money. A perfect demonstration of how fragmented governments encourage wasteful spending and hurt our cities and towns.

I appreciate the kind words. A point that I failed to make in my post is that, when municipal services are consolidated, they tend to become cheaper and hence cost less tax dollars.

Why not a county-wide police department, fire department, Public Works department?...I know why not....Municipalities do not want to give up their autonomy....and the crooked politicians could not rule the way they do now...the Monty Hall method of government....."let's make a deal".

Yeah, that's a problem. I live in Nazareth. Not long ago, Nazareth promoted the idea of a regional police department, but then backed out. I think borough officials felt they were losing control.

In the county, most of the deputy sheriffs have a police background. There is much to be said for merging them with all the local police departments. That will give the police department a measure of independence from local officials.

I don't know whether this should happen, but it's an example of one of the many types of regionalization that should be considered.

For years, America's political-scientists, like the Middle-Ages alchemists who dreamed of transmuting lead to gold, have pursued putting into practice the theory of reducing the number of states by consolidating them into regions.

If Northampton County, or Lehigh County, were genuinely interested in regionalization, they would do what Davidson County, Tennessee, and its seat, Nashville, did many years ago: create a metropolitan government instead of deluding the public, and themselves, with the notion they can achieve regionalization through such tomfoolery and chicanery as COGs (Congress of Governments)and Inter-Governmental Agreements, etc., etc., etc.

Our officials dupe taxpayers with these deceits because they know that merging and annexing municipalities is politically impossible. Look what happened when voters were asked to merge the City of Easton and William Township: The initiative was soundly rejectd by the voters of both municipalities when the question was put to the vote in a referendum.

The merging of the vast number of government bodies in our area is a great idea I have been discussing for as long as I have lived in the Lehigh Vally (18 years). The current system makes no practical sense. The biggest problem is the "big fish small pond" syndrome where no small time "leader" is willing to give up his/her "power" for the betterment of the region.

I was speaking with Rep. Craig Dally after an event and brought up regionalization. Specifically, I presented the idea of rolling all of the townships, boros, etc. back into the three cities. I would expect such an approach would reasonably have Nazareth and other northern townships grouped together as one governing body.

Dally asked me "if I wanted the City of Bethlehem to make decisions about what happens in my backyard?" I responded that there would be representation for the different areas and that, even without representation, Bethlehem could not do any worse of a job planning the area I live in. In the end he just didn't get it or didn't want to get it. The point is, even Represenatives who can appear to be fairly reasonable cannot see the bigger picture.

How much money (taxes) could we save with two school districts and four or five regional governments? How much better would planning be with everyone's best interest taken into consideration? How much better would the Valley be if our gelected officials would listen to their constituents and actually govern with some thought for teh future?

Dave, I think you hit this on the head. Regionalization of some services, like police services, has been quite effective. It appears to me that COGs, as Billy Givens astutely observed, end up doing little more than adding a layer of beaurocracy. The reasl answer is to start consolidating some of our governments.

This is where parochialism comes into play. Craig Dally is merely voicing an objection that will be made time and again. Do we want someone in Bethlehem or Allentown deciding what goes on in Bangor?

My answer is that I would rather have someone in Bethlehem making these decisions than someone in Harrisburg. I think we are so fragmented that the Lehigh Valley really loses out with the state and we end up getting smothered by Philly and Pittsburg. If we want to be heard, we need to consolidate. There is strength in unity.

But I don't see this message being that popular in my lifetime, although I'd be very happy if Damien Brown were right.

Berine,
I have lived in Pennsylvania for many years. I have also lived in other part of the country. What I do not understand is why doesn't Northampton County government use the resources it has to it's full capacity. I most states the Sheriff's Department cover those parts of the county not covered by a city police department,and the State police maintain the Interstate highways.I have done research and have found out that Sheriff's have the same training as other police do in Pennsylvania,and in fact even more training in civil law.Also some parts of Pennsylvania are already using their Sheriff's departments for police coverage. During the three floods of late the Sheriff's Department patorlled my township,and did a great job. Why dosen't Northampton County use the Sheriff's Department to it's full capacity . This also could be done with other services such as fire and medical services. County government needs to give it's citizens those basic rights it is paying for with taxes. the right of feeling "safe" in their homes.

I has begun, leter went out for Mr. Cunnighma's office asking inout from the local townships concerning a "Congress of Governments" in Lehigh County

They already have that sort of thing in NC. It's called a COG, or Council of Governments. So far it's been used to consider regionalization of services, but not to consolidate municipalities. But I agree that it is a first step, and I think it's a step in the right direction.