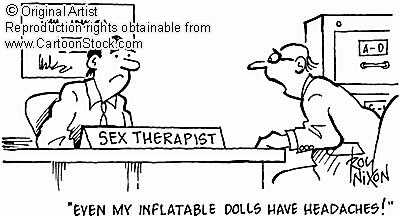 There's a new blog in town, Lehigh County Redneck, run by an anonymous blogger who calls herself "Dem Fly on the Wall." Yet she also claims to be a Republican who likes to "torture men," among other things. She labels herself a "political assassin" and is just a bit too casual on that castration subject for my taste.

Has anyone seen Loretta Bobbit lately?

Well, whoever she is, she's off to one hell of a start. In her very first post, she emasculates Upper Macungie Township officials, hinting at everything from inflatable dolls being posed provocatively to free housing for a ghost employee.

I wonder if these guys will hire Lamont McClure for a libel suit.

Bill White ran a column about Upper Macungie Township's scandal just last week, but spared us all the juicy details. In Bill's own words,
"One of the problems is that second-class townships are allowed to hire their supervisors as employees, blurring the lines between management and labor. In the Macungies and other townships, supervisors get to hire and supervise themselves. It's a miracle there aren't more abuses, particularly when you start handing out credit cards."

Show me a clean government and I'll move there tomorrow

yeah, it's disgusting what's going on.

Looks like the lady isn't holding back her feelings. I had ni idea she felt so repressed

Casey has a bat has officially evolved into Musings from Mudville
Check it out!

If they think that we arn't watching.....remember the inflatable doll isn't the only thing that's leaking.

I'll tell you something right now. I would not want to be on the wrong side of Lehigh County Redneck. Those poor bastards in Upper Macungie are in touble.

Casey Has A Bat had a terrific perspective on local politics, and I can't wait to rtead more of the same from its successor, Musings From Mudville.

Musings From Mudville and Lehigh County Redneck are a husband-wife tag team. I think I know who gets to use the computer first.

I'll pass your message along to Lehigh County Redneck. May God have mercy on your soul!

Oh God Bernie, She's been in there typing for 20 minutes, she Googled Tom Gorr,and knows who circumcised him. She is brutally thorough as a researcher. If this is our old nemesis from the Applewood area, she will crush him.

Also don'tvoteforcasey is a dead blog site, just like Uppermacqueen.
They created the blog just to publish a remark, I can't complain, I understand, I keep my anonymity to keep my job.

Strange thing. When I first published this post, I sent it to every U Macungie Tp official and asked for comment. The only response I received was from one township official who said, "not interested."

Now someone posts a message who says Chris Casey is behind all of this and he's "hiding" a lot of bad things about himself. Also, we're reassured that the Ethics Commission will find that there was no criminal wrongdoing. Well, why wouldn't an Upper Macungie Tp official pop onto this blog and make a defense? Why use a nom de plum?

From what has been acknowledged publicly by township supervisors, they engaged in personal use of township credit cards. Now I don't know what Lehigh County Redneck knows in addition to that, but The Morning Call has quoted township officials acknowledge misuse of credit cards. It doesn't particularly matter to me whether that's criminal. It's clearly unethical.

And the "I am not a crook" defense didn't play so well the last time it was tried.

As far as Chris Casey is concerned, I wouldn't know him if I fell over him. And whether he is "hiding" something is irrelevant to the question whether Upper Macungie Tp officials are misusing their office, wouldn't you agree?

Sorry Bernie, I guess I should have made it clearer. I'm a resident of Upper Mac who saw the articles relating to the supervisors and wanted to find out for myself what was going on. I was responding more to her comments then to your article. I just thought she was misinformed. I know what the papers say, but there is always more to the story. As far as Casey goes, you are right. Whatever he is hiding doesn't matter regarding this issue, but it does matter overall. My dislike of Casey isn't sparked by the Upper Macungie thing, he crossed me after I supported him and I didn't like that.

Bernie, the only thing Casey ever asked of me was that we change our blog name. I only got part of my info from Chris, a lot of it I got by doing research. I'm sorry don't vote forcasey is upset with my views, but unlike her, I respect her right to have them. I think open discussions are a good thing. I have drafted a new post, but decided not to publish it. I believe it is better to stay silent,and be thought stupid, than to open one's mouth and remove all doubt. Perhaps don'tvoteforcasey should consider that before she blogs again.

Upper Macungie "not criminal"?
In a few weeks all will be clear.
I hope Porter and Tom look good in stripes.

you ever notice upper mac. has land,uses there workers and equip. to put a park on it . lays on the park for a few years and sells the land off. this is unreal on the tax-payers dollar they are turning a profit?

look at upper mac web page, i have a house near me the sand mound is shot,and smells really bad(lot o fun when u have the grill on) find somthing on there web page? nothing.... look at longswamp web page, there is a book on septic alone to let ther people know whats right or wrong. i know people in upper mac. who had the (INSPECTORS)check there elec,or pools and it was like they were making it up as they went along.maybe its my computer, I tried to contact them and could not. look at the septic people, there are no contacts, and if i try the superviser, it just DONT WORK, go figure.

If everyone is suposed to get permits for decks,driveways,sheds ect... and the township makes me follow certain criteria but allows others to not follow said regulations what can I do???