Nazareth's New Gov't Center: It's the Big Kids Against the Little Kids 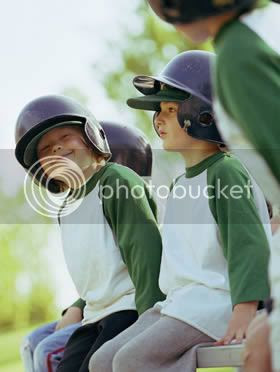 Well, it's that time of the year again in Nazareth. Daylight savings time, followed by hayfever. Bright sunny mornings, followed by torrential afternoon downpours. Freezing one day, sweltering the next. And during this unpredictable and magical time of the year, the most unpredictable and magical games of all, baseball and local politics, are in full bloom. This year, those two games have collided in Nazareth. Borough officials, aka the Big Kids, want to confiscate much of a residential park so they can play their own games. The victims, of course, will be the Little Kids.

On Tuesday night I watched the Yankees play the Phillies. Now, I'm not talking about those pill-poppin' prima donnas who just wrapped up a three game series in Philly. I'm talking about real athletes who play for the joy, not just of sport, but life itself.
Yep, these are the kids you see on your neighborhood fields most any night. I know them pretty well. Dougie and his brother Shane, Brian and his brother Blaine, Vinnie, Billy, Nicki, Sam(antha), Ben (Orange Crush), John and Dat. Their field is Nazareth Hall Park. That's their turf, baby. They play baseball, kickball, football, lacrosse, freeze tag, home run derby, laser tag, pickle, soccer, and just about anything that will keep their legs moving. Brothers constantly fight, but look out each other. Younger kids are always welcome, and no one argues when they get five strikes. Occasionally, a Dad or Mom will stop by with drinks or to play ball. These kids will use the perimeter of that park to "plan" strategy, trade cards, construct home-made balls they delight in exploding with their bats, or tell tales about the ball that hit a house or the time Billy's ball smashed through a car window. They argue "rules" during any game like high-priced lawyers, but don't try power plays against each other the way our pols do: everyone gets a turn. There's an innate fairness in these kids that we seem to lose as we get older.

All that is about to change.

The Big Kids want to build a new $3 million government center. And they'll do it right in Nazareth Hall Park. They say they won't wreck the baseball field, but they'll consume so much park land it will be impossible to do anything else. A police department, borough offices, 9 car parking lot, and one of those weird retention ponds will ruin the park for the little kids, taking away what little open space is left. What's left will be a mosquito park, thanks to the retention pond.

When it seizes this park from little kids who can't vote, the Big Kids will be abandoning their own Main Street District, which requires a police presence.

A few years ago, the Big Kids did consider buying a property for their new government center in another section of town. The property was cheap, and it wouldn't have consumed any park land. Yet that idea was almost immediately killed. Why? It was too near Lawyers' Row, the homes of Bigger Kids. The Bigger Kids said things like "habeas corpus" and "mandamus." That scared the Big Kids.

There are no Big Kids at Nazareth Hall Park, just a bunch of little kids about to be lose not just their park, but some of the joy of growing up. Don't they get a turn, too? Won't anyone speak for them?

A Nazareth Citizens' Action Committee has formed and is circulating fliers. A rally is planned before the Big Kids meet on July 10 at Council Chambers (159 W Center Street)to play their games. And Jack Herbst, a Borough Councilman, will speak up for the little kids on Thursday, July 6, on WGPA 1100 AM between 8 and 10 AM. If you'd like more details, there are several posts at News Over Coffee: Nazareth News.

If you live in Nazareth, I hope you can speak up for the Little Kids, too. If you don't live there, that's no cause for relief. We have 62 distinct muncipalities in the Lehigh Valley alone, so it's hard to believe the situation in Nazareth is unique.
Posted by Bernie O'Hare at 6/22/2006 12:09:00 AM

Brood mare Rachel Hogan, Carol's and Jim's neighbor on High Street with her husband Bill, also spends her daytime working hours in a stall provided by the livery's owner himself, Peter Koehler.

Carol is currently pushing on city council a silly, politically corect, "human rights" ordiance. It would punish, in unspecified terms, any Easton citizen snithced on by another, of any alleged ethnic slur, and incite Anthony Comstock-like organizations like B'nai B'rith and the Italian Anti-Defamation league to investigate.

What Easton, and the county of which it's the seat, really require is an investigation by Amnesty International of similar human rights organization, for which a critical need already exists: a Bethlehem cop holding his loaded service revolver to the head of a fellow FOP; Bethlehem jinjas setting
setting off a "bang-blast" device - shades of Philly Mayor Wilson Goode, his police chief, and DA Ed Rendell lobbing a bomb from a hovering helicipter down the chimney of a house in West Philly, igniting an inferno that destroyed a half-dozen city blocks and killed eight adults amd seven children of MOVE; an Easton cop, Scott Cameron, shooting and killing Phillisburg resident John Repp in Hacketts Park; other Easton policmen attacking and maiming other Phillipsburg citizens on the Delawaare River Joint Toll Bridge Commission's pay bridge following a traditional Thanksgiving Day Red Rover-Stateline high-school football game; Northampton County Prison abuse evoking images of Abu-Ghaib, as documented in the Arthur Tredennick Report and covered up by county officials including DA Morganelli. (Not until a public outcry over the veteran Bethlehem cop who held his .357 magnum against the head of a colleague did Morganelli initiate an investigation, and only after public disclosure that the county and the PA Attorney General's Office were investigating the Northampton County Housing Authority fraud did Morganelli climb aboard the bandwagon); the abduction and imprisonment of Plainfield resident Anna Mae Kessler; the reprisal firing of two Northampton County-contracted computer workers who blew the whistle on their employer, Affiliated Computer Services (ACS), covered up by Northampton County officials who just like week extended their contract with the Dallas company; numerous abuses in the county's Agency on Aging and Department of Domestic Relations, etc., etc., ad naseum.

So maybe Rachel Hogan, as a member of Easton's commission looking at ways to overhaul the city's corruption-ridden government, could suggest amendments beefing up Hefley's draft - though Hogan is the only member of the commission who has recommended taking the full 18 months alloted for the study instead of comleting it ASAP.

Billy, Thanks, but I don't think your comment has anything to do with Nazareth Hall Park, the focus of today's post.

I intend to cover the Human Rights Ordinance in a future post. I think it's a good thing.

I remember when you played there. You had a nice hit that day.

Your post today makes it obvious that the officials of your boro, Nazareth, basically plan to shut-down the public park where the boro's kids play baseball.

I sincerely hope the officials' essential "no-hitter" strategy fails, and that they are denied the victory achieved by Northampton County, its seat Easton. and the Allentown Catholic Diocese and St. Bernard's Parish in virtually "shutting down," not "shutting out," historic downtown Easton's African-American and Latino neighborhood of Dutchtown-Gallows Hill.

I should hasten to add to this cabal that has collaborated in the nieghborhood's shutdown the disastrous, and disgraced Northampton County- and Easton City-administered Weed 'n' Seed Program

The neighborhood shutdown has witnessed the loss of Easton Catholic High School and St. Bernard Parish convent; the City of Easton's art deco City Hall located at 650 Ferry St.; the city's state-of-the-art police station, constructed with federal Community Development Block Grant (CDBG) funds; loss through arson of America's oldest Jewish Synagogue, located in the 200 block of S. 6th St.;loss of another former historic Jewish synague, this one located in the 100 block of S. 6th St. and home of the Police Athletic League until its eviction for occupancy by a retail pet store outlet, Nature's Nook, through a zoning waiver of special exception grantd by the corrupt Easton Zoning board under its chairman James Edinger, who also chairs the Easton Democratic Party Committee;the loss of a number of privately owned residences through illegal acquistions by Northampton County, violative of the county's Home Rule Charter, including a residence on S. Union St. owned by Michael Fleck (not the former Easton city councilman), but a local roofer and sometimes Schy-Rhys Development Co. partner, and his wife Angelina, a member of the St. Anthoney Youth Club's board of directors; another former residence located on S. Union St. and its intersection with the 600 block of Lehigh St., now occupied by the headquarters of the prison expansion's construction manager Keats and Co., the office of the county-retained family serices attorney Ellen Kingsley, who represented the county in its abduction and imprisonment of Plainfield resident Anna Mae Kessler; loss of "Spruce Way" pocket park between S. 6th and S. Union streets for construction of the new county Domestic Realations Building; loss of St. Anthony Youth Center' soccer field at the intersection of Washington and 5th streets for a Govenrnment Center Expansion parking lot; and,finally, an agreement now being negotiated for transfer to the county two apartment buildings occupied by 11 families, located at the intersections of Washington, 5th, and Lehigh streets.

Well done Bernie!!! These and some other very important points, like increased taxes, abandonment of the downtown area, and general disregard for the will of the constituency, individually make strong arguments for council to abandon these plans. Put them all together and it is shocking that the council has the nerve to bring this project forward again !!!!