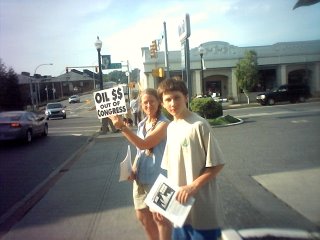 "Does this have anything to do with casinos?"

This was a question I heard several times yesterday from passing motorists while a small but determined local group rallied for oil independence outside of an Exxon gas station on Bethlehem's south side. It was afternoon rush hour, and South Bethlehem differs from the rest of the Lehigh Valley because, in addition to cars, lots of pedestrians and cyclists tool up and down New Street that time of day. I'm pretty sure they knew we weren't there about the casinos.

People were very cordial and seemed to take our rather bleak message in stride. One fellow actually parked his car, got out, and asked me for a flier. But that wasn't the typical reaction. If a young handsome fellow like Peter Christine (pictured above with his pretty mom) approached a car, the driver would take the flier and try to take Peter, too. But whenever I approached a car, windows went up and car doors would lock. Now, my zipper was up and I took a shower this morning. I even shaved. Am I that ugly? On the bright side, one lady did toss a quarter at me.

At one point, we were visited by about four Bethlehem police officers and their shift commander, who were very polite. We were even joined briefly by Steve Schmitt, CAT's executive director, who pedaled through South Bethlehem in pursuit of organic produce. He offered some to me, but I told him I only eat meat - human meat. He left immediately.

What made our small group a little different is that we were joined by two government officials - Bethlehem Councilwoman Karen Dolan and Northampton County Councilman/Congressional candidate Charles Dertinger. To their credit, they recognize we have a problem, and it isn't a liberal or conservative problem. We're running out of oil. We need to plan for that certainty. And that won't happen until we have government leaders who recognize reality and refuse to be pressured by special interests, whether it's Big Oil or land developers who ravage what little open space is left.

I suppose what impressed me most about today's rally was the friendly and civil attitude that most Bethlehem drivers displayed. Maybe they were just happy that it finally stopped raining. Or maybe it's a sign that our greatest weapon against peak oil is our own compassion. Today's rally was just a baby step in the direction of oil independence. But it was certainly in the right direction, and for that reason alone it was a success.
Posted by Bernie O'Hare at 6/29/2006 12:02:00 AM

I'd lock my car doors and roll up the windows too if you got too close! It's not that you're ugly (you are), but you have that crazed look of a terrorist in your eyes. Look, you scare people--even your friends. Why should this come as a surprise to you???

I suppose that's why the Chippendales have not returned my calls.