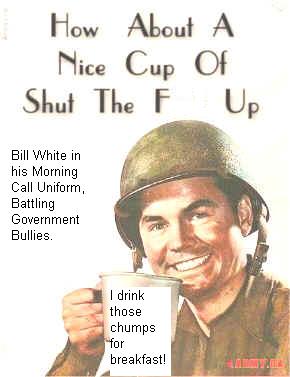 Last week, I impudently suggested that Northampton County Councilman Lamont McClure and his "Law and Order" committee had violated the Sunshine Act. McClure popped onto this blog himself to demand I immediately retract my charge and apologize, or see myself at the wrong end of a libel prosecution.

McClure's a hot shot asbestos lawyer who works for the Angelos law factory. And his council campaign was heavily funded by big city lawyers and the DA's office.

My response to McClure? I repeated my accusation in a second post. Now I could tell you I was heroically standing up to intimidation tactics by a bullying government, but that's a lie. The simple truth is I'm a miserable bastard. I don't even get along with myself!

I was trying to figure out how to defend a McClure libel suit (insanity?) when The Morning Call reported I was right! Both County Council's Solicitor and a media lawyer agreed that McClure had violated the Sunshine Act.

Now poor Lamont is going to have to sue me, a media lawyer, his own solicitor, and himself. It's a good thing Lamont knows all those big city lawyers because he's probably going to need their help. But it's too bad for the rest of us that a lawyer who chairs Northampton County's legal committee knows so little about the Sunshine Act.

Bill White's conclusion? Lamont needs to learn "when to just shut up." My conclusion? I'd love to hear more. It's really generated a lot of interest in this blog.

If anyone questions why we need a free and independent press, last week provides a small example. But for the press, a local government bully would have continued his attempt to muzzle a citizen who dared point out a Sunshine Act violation. I suspect Lamont is going to keep newspapers busy.
Posted by Bernie O'Hare at 6/12/2006 06:39:00 AM

Good, stand-up work Bernie! The boys at Easton UnDressed are happy to see that eyes are on the county. I see a team-up in the not too distant future.

PS If I don't have a link to your site on our blog, it's only because I am falling behind... I will get one up.

Thanks! I've had your blog, and its excellent insight into Easton, linked for some time.

Lamond McClure was installed on county council to throw county lawsuits to his lawfirm,which specializes in asbestos litagation.

His cohorts, showing insensitivity to blacks and Latinos, chose McClure over an African-American and a Latino candidate, both highly qualified for the council vacancy that McClure sought, unsuccessfully, in the May 2005 Democratic primary.

Bernie, you should check out Lehigh Valley Redneck, a new blog, with just devastating info on some hard line power abusers out in Western Lehigh

I'd be happy to check out Lehigh Valley redneck, but need a link. I tried to google it and could not find it.

That was 1 of Bill White's best columns. Too funny. There is a lot to be said for just keeping your mouth shut sometimes. You baited him and he took the bait. Ya gotta love amateur politicians.

Bill White is a great columnist, but the suggestion that I baited Lamont McClure implies an intelligence that I lack. I wish I were that clever.

Mr. O'Hare lost his license to practice law in 1985. He has been extremely bitter since then and his commentary should be viewed in that light.